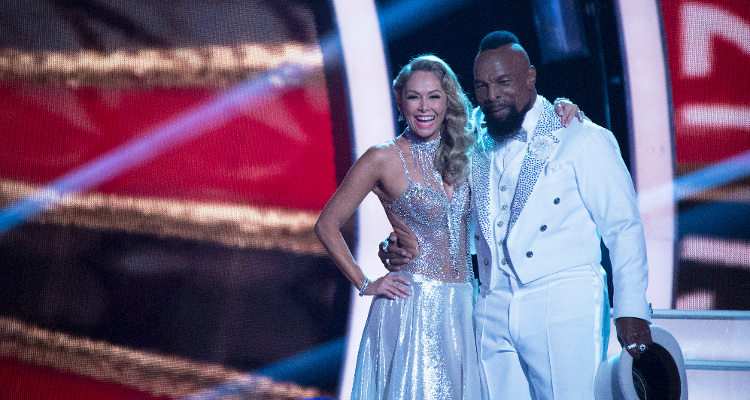 Dancing with the Stars season 24 gave us the first tears of the season with the heartwarming theme, “Most Memorable Year.” But the saddest part was seeing one of our favorite celebs go home. Who got voted off on DWTS tonight? We’ve got the scoop!

We hope you had the tissues ready for last night’s episode of Dancing with the Stars, because it was a doozy! The stars shared their emotional stories during “Most Memorable Year” night. It varied from triumphs over difficult odds to a fruitful televised love quests, and it was all very emotional to say the least. In the end, the judges’ scores and viewers’ votes sent one couple home. Who is left in the Dancing with the Stars cast after tonight’s elimination? Here’s what went down.

Unconditional Love for Rashad and Emma

NFL pro, Rashad Jennings faced a little slump last week. But nevertheless, he bounced back with the unconditional love he shared with his father. He and his partner, Emma Slater danced the first contemporary routine of the season to Katy Perry’s “Unconditionally,” which was apparently a song request by the free agent.

Rashad’s father has diabetes and as a result had to have both his legs amputated. The dance was all about their father-son dynamic, and how it went from bad to good. We weren’t surprised that both Rashad and his dad’s eyes welled up at the end of the performance.

The judges had only good words for the routine. Julianne Hough was speechless for most of the night. We understand you, girl! And he got the highest score of the season so far; a 39 out of a possible 40. They received three 10s! Len Goodman had to play party pooper and give Rashad and Emma a 9.

Other high scorers of the night were Simone Biles and Sasha Farber who got a 36 for their Viennese Waltz. Simone’s most memorable year was when her grandparents adopted her. Heather Morris and Alan Bersten were third with 35 points for a cha-cha that celebrated her marital bliss. Normani Kordei and Val Chmerkovskiy had the rest of Fifth Harmony sing live as they danced the rumba, with Normani even singing the first verse of “Impossible” by Shontelle.

Who was Eliminated on DWTS Tonight?

Since Charo was eliminated last week, many predicted that Mr. T or David Ross would be the next to go. But the former MLB player knows how to attract the votes with his all-round entertaining charm! David and Lindsay Arnold upped themselves two places above Mr. T with 31 after their Viennese Waltz tonight. The bottom three is not exactly the safest place to be, but his scores and votes keep getting higher every week.

Mr. T is one of the polarizing stars this season. Some would get technical and say he’s the worst dancer of the lot; some would say that they “pity the fool” Mr. T, and he should stay. But unlike David, he’s not improving that much. Tonight, he was at the bottom with 28, even though his story about surviving cancer and his waltz were definitely heartrending. Just when he was beginning to show his softer side, he landed in the bottom two!

Nick Viall and Peta Murgatroyd, as well as Erika Jayne and Gleb Savchenko were tied with 30 points, placing them in the bottom two. Some Dancing fans predicted that Erika was going home tonight. Is Erika Jayne still on Dancing with the Stars? Fortunately for Nick, he was saved by the skin of his teeth once again, when Erika was announced to be in the bottom two.

It came down to Mr. T and Kym Herjavec along with Erika and Gleb, who had the lowest combined audience votes and judges’ scores. Sadly, Mr. T bid adieu to the ballroom, and the studio audience was not happy about the decision.

The remaining couples will tackle Disney night next week. Dancing with the Stars airs Monday nights at 8:00 p.m. EST on ABC.