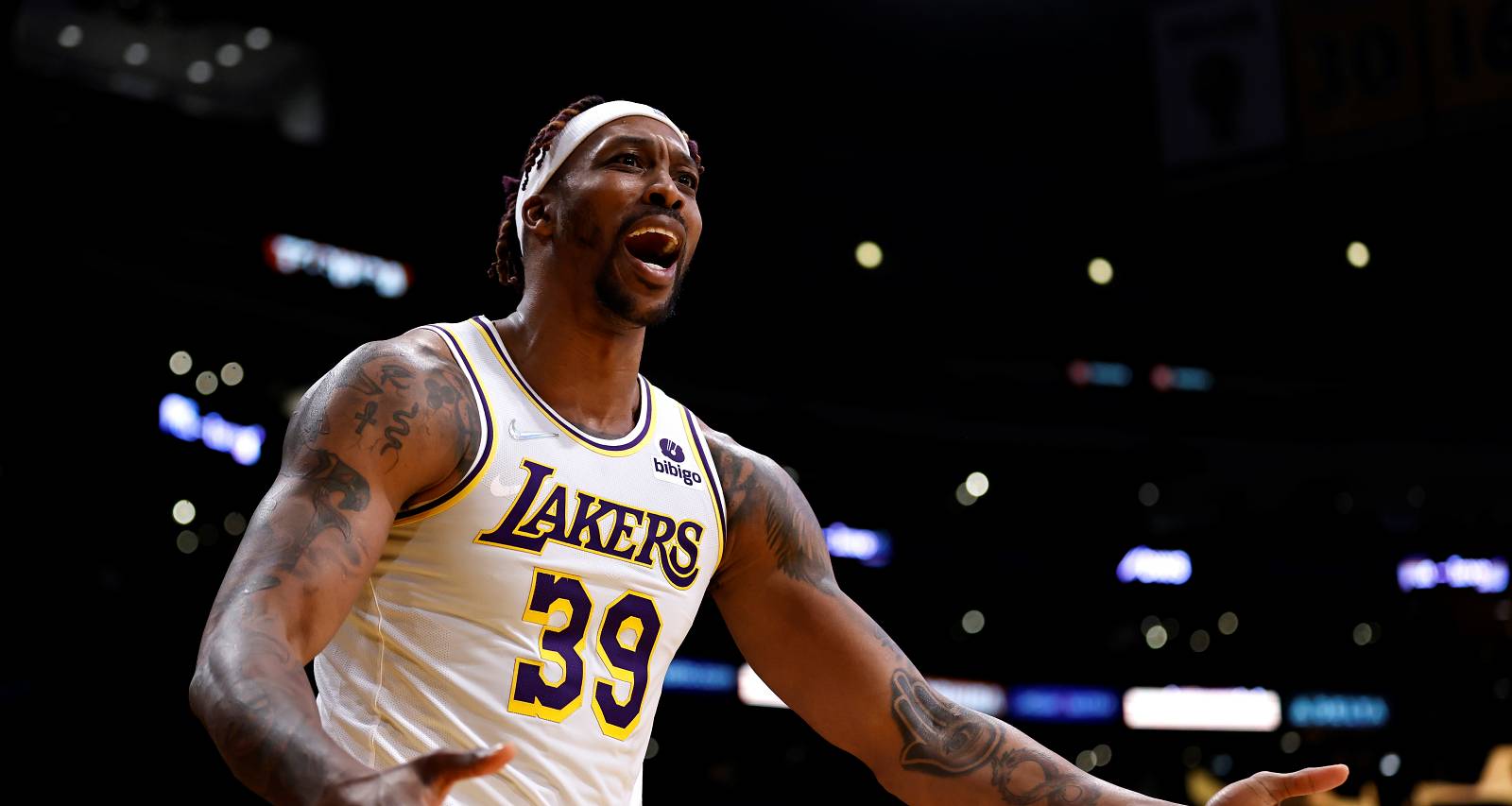 Dwight Howard #39 of the Los Angeles Lakers reacts to a call during a game against the New Orleans Pelicans in the first half at Crypto.com Arena on February 27, 2022 in Los Angeles, California. (Photo by Michael Owens/Getty Images)

How rich is Dwight Howard? The Houston Rockets basketball player, who plays as center, has been turning heads on the basketball court since high school and is now a free agent.

Howard is known for his basketball skills as much as he is for his philanthropy, and with all the money he’s made it’s no wonder that the Dwight Howard net worth is $100.0 million, making Dwight Howard’s salary $21.4 million.

Dwight David Howard was born on December 8, 1985, in Atlanta, Georgia, to parents Dwight, Sr. and Sheryl Howard. He was born into a strong athletic family; his father is a Georgia State Trooper and serves as Athletic Director of the Southwest Atlanta Christian Academy (with one of the best basketball programs in the country), and his mother played on the inaugural women’s basketball at Morris Brown College. Howard became serious about basketball at the age of nine. He attended Southwest Atlanta Christian Academy for high school, and in those four years he mostly played as power forward. As a senior, Howard led his team to the 2004 state title and was seen as the best American high school basketball player that year. Howard also has a son, Braylon (who was born in 2007), with former girlfriend and Orlando Magic Dancer Royce Reed.

Dwight Howard Net Worth Compared to Other NBA Players

Right after high school, Howard decide to skip college and declared for the 2004 NBA draft—a decision that was inspired by his idol and fellow basketball player, Kevin Garnett, who had taken the same path in 1995. He would then be recruited by the Orlando Magic with whom Dwight Howard’s contract lasted from 2004 to 2012. Howard was a great addition to the struggling team, and while there, he donned the number 12 jersey and quickly made a name for himself. He was an asset to the team, and many fans still know their Dwight Howard stats and have watched the Rockets player grow as a superstar athlete. The six-foot-eleven basketball player was then traded to play for the Los Angeles Lakers from 2012 to 2013 before being traded again to the Houston Rockets in 2013, where Dwight Howard’s contract with the Houston Rockets was a four-year deal for $88.0 million as a free agent.

Howard bought a 15th Century styled mansion for $7.8 million in Longwood (3565 Rice Lake Loop) and sold it for only $4.9 million. No report as to why he undersold his house, but it’s doubtful it hurt his net worth. The Chateau d’Usse two-storey, palatial property had multiple baths, bedrooms, living spaces, a home theater, marble floors, and waterfalls. Inside the spacious garage is where Howard stored his car collection, which includes a silver and white Bentley Muslanne and a white Ferrari FF with a red interior. But cars aren’t the only thing Howard collects—the basketball player also has a collection of 20 pet snakes and 50 guns, including a pair of bazookas (for ornamental purposes only).

It’s no secret that professional athletes make more money off the court than on and often get their merchandise for free on top of the lucrative endorsement deals. Howard has made $4.0 million in endorsement deals with Adidas and McDonald’s.

Howard isn’t just known for his scoring average on the court but also for his philanthropic endeavors. He wanted to use the NBA and his faith in God to make a difference in the world and contribute to the community and he’s done just that. Howard decided to establish the Dwight Howard Foundation (also known as D12, after his name and jersey) in 2011. The foundation’s focus is to facilitate positive change in the lives of American youth as well as girls in East Africa through strategic programming and funding. Their mission is to help bridge the gaps within the community, by Howard making use of his unique position and talents and partnering with people who share the same vision and focus, using their celebrity to benefit those in great need.

Howard has also donated thousands of dollars to benefit different causes such as the earthquake in Haiti and to Orlando’s BETA Center. He and members of his D12 staff traveled to Alabama to support Habitat for Humanity and built 10 homes for those who lost everything in the April 27 tornadoes. He also enlisted the help of his fans to lend their support through monetary donations and/or volunteer efforts.

Whether it’s winning a game or changing lives, Howard gives everything he does nothing short of excellence and continues to strive to do the best he can—for himself and others.

Breakdown of the Dwight Howard Net Worth