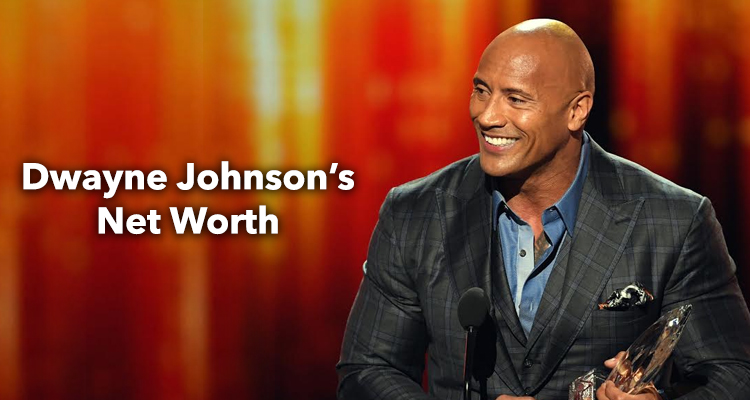 The Rock, a.k.a., Dwayne Johnson, was announced as 2016’s highest paid actor and for who isn’t even 50 years old yet, that’s a serious accomplishment! Dwayne Johnson’s net worth is a whopping $185.0 million, so you’re wondering where his fortune comes from, we’ve got all that information and more for you right here!

At only 44 years of age, The Rock has reached incredible heights in terms of his success as an actor, and in terms of his bank account. His lovable personality, contagious sense of humor, and all-around awesomeness are reasons why we can’t get enough of him! While some believe his acting skills aren’t that great when compared to other Hollywood A-listers, others enjoy the funny and intense personality he brings to his roles. If you want to know all about Dwayne Johnson’s financial situation and learn some fun facts about Dwayne Johnson’s movies, career, and properties, here’s everything you need to know!

How Rich is Dwayne Johnson?

Johnson was raised in a family of wrestlers. The American-Canadian actor was born in Hayward, California to Ata and Rocky Johnson (née Wayde Douglas Bowles), who was also a professional wrestler. Wrestling was in The Rock’s blood, as his maternal grandfather was a wrestler and his grandmother was a wrestling promoter. His cousin, Savelina Fanene, is also a WWE wrestler! He comes from the respected Anoa’i wrestling family of legends like his uncles Afa and Sika Anoaʻi (The Wild Samoans), and his cousins, Rodney (Yokozuna) and Solofa (Rikishi), to name a few. Johnson was also a promising football player and was granted a full scholarship to the University of Miami. He graduated with a Bachelor of General Studies in Criminology and Physiology.

Dwayne Johnson’s house is a $4.5 million mansion in Fort Lauderdale, FL. It was also reported that he owned a mansion in Beverly Hills, California that he recently sold for $5.0 million. Dwayne Johnson’s car is a black Pagani Huayra valued at $1.3 million. He used to own a black Ford F-150, but gave it to his uncle, former wrestler, Haku, as a Christmas present.

How Much Money Does The Rock Make a Year?

Who is the highest paid actor? Get ready to have your hair blown back by the huge figures! Last August, Dwayne Johnson was named the world’s highest paid actor, thanks to his huge annual salary of $64.5 million! His 2016 salary more than doubled his earnings from 2015, and the increase is attributed to his upfront fees for his roles in Central Intelligence (2016), Fast 8 (2017), and the upcoming comedy adaptation of Baywatch (2017). His 2015 films (including San Andreas) also performed incredibly well at the box office, and his previous Fast & Furious franchise films helped his quotes blast off! Johnson can also boast of his earnings from his role in the HBO series, Ballers. Johnson displaced three-time list topper, Robert Downney Jr., who dropped to the No. 8 spot, earning $33.0 million for reprising his role as Iron Man Tony Stark in Captain America: Civil War. The 6’5” tall superstar has a slew of releases lined up until 2019, including the Disney animated film, Moana, Doc Savage, DC’s Shazam, the sequels to San Andreas as well as, Journey. The former WWE star was ranked No. 1 last year on Forbes’ list of highest paid actors, with earnings of $64.5 million for 2016. Compared to stars like Jackie Chan ($61.0 million), and Ben Affleck ($43.0 million), Johnson’s earnings are very impressive!

Want to say two things about this.

Waffle House on me!! https://t.co/r3UeQYaLmT

How Much Money Does The Rock Have?

*All amounts sourced from The Richest or Forbes.

Johnson’s net worth is estimated between $185.0 million and $256.0 million. The high figure comes from his brilliant business moves, his popularity at the box office, and his rapidly-increasing annual salary figures. His salary is 11 times larger than John Cena’s, 10 times larger than Hulk Hogan’s, three times more than Vin Diesel’s. Believe it or not, it is only 15% smaller than Arnold Schwarzenegger’s.

Check out Dwayne Johnson’s net worth compared to some of his action star peers!

But The Rock isn’t all about receiving when it comes to money. In 2006, he and his ex-wife Dany Garcia donated $2.0 million to help with the construction of the alumni center at the University of Miami. In 2007, they donated another million to renovate the school’s football facilities. The actor also helped raise funds for the Rush Philanthropic Arts Foundation for their 2009 Art for Miami Beach gala. He supports first responders and military personnel through his work with Under Armour’s UA Freedom initiative, and he donated $1,500 to help with the recovery of an abandoned and neglected puppy named Dwayne in 2015. (Adorable!) He also founded the Dwayne Johnson Rock Foundation to help hospitalized children. These are only a few of the ways Johnson gives back to the world out of his wealth! Talk about a stand-up guy!

I'm a man who knows when to use honey and not vinegar to get my way. 😂🍯 This girl @hokumarianopinto is a rockstar. Great meeting you Hoku and keep inspiring all those around you. Thank you for blessing us with your presence. Stay cool! #OnSet #Jumanji #MeetingHoku #McKinleyStrong #RR4L #PolyPride