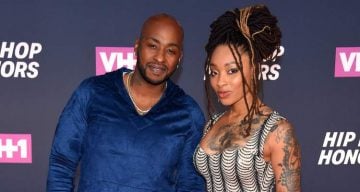 The latest season of VH1’s Black Ink Crew premiered last night, and Ceaser and his tattoo artist crew are back to entertain us. But it was Dutchess who stole the show, even though she doesn’t make an appearance this season. All that drama with the clowns reciting a telegram song means only one thing—Dutchess is laughing all the way to the bank. The reality TV star has gained much from the show, her relationship with Ceaser, and her own tattoo shop. Get the scoop on Dutchess from Black Ink Crew’s net worth and more!

Dutchess from Black Ink Crew is one tough businesswoman, and she won’t let anyone get in the way of her dreams, not even Ceaser! The on-going drama between Dutchess and Ceaser had fans glued to their television screens, and many want to know more about Ceaser’s former girl. So, keep reading to know all about Dutchess from Black Ink Crew in her wiki.

Born as Crystana Lattimore on February 25, 1984, in Lincolnton, North Carolina, Dutchess’ age is 33.

Dutchess pursued a degree in Business Management with a concentration in Visual Arts from North Carolina A&T State University. Her passion for designing tattoos grew when she was earning a master’s degree.

The artist has also dabbled in modeling and was the winner at the Boston Tattoo Convention Beauty pageant in 2010.

Dutchess rose to fame as part of the VH1 reality show Black Ink Crew which first aired in 2013. The show revolves around the lives of the employees of a tattoo shop in Harlem, New York. She got a job at the Harlem tattoo parlor when she moved from North Carolina to New York.

Never-ending drama follows Dutchess wherever she goes, and her appearances on Black Ink Crew attest to the fact. Fans have followed Dutchess’ every move, but not everyone is happy with the things she has said on the show.

First, Dutchess thought she was entitled to half of Ceaser’s business. Then her relationship with Ceaser ended in a big mess, leading to Ceaser living the ultimate single life on last night’s episode.

However, it seems as though Dutchess has moved on.

I learned to smile through it all long ago. ? #dutchology

Dutchess’ boyfriend was Carolina Panthers star Zach Sanchez, but there were rumors all over social media that the couple had split up. But, nothing’s been confirmed yet!

Now Dutchess is not even in season 6, and she still has everyone talking about her.

In a sneak peek of the next episode, we see that Dutchess has left a deep mark on her former colleagues at the tattoo shop, especially Sky, who was excited to reunite with her sons. And the hatred between the two of them got deeper after Dutchess and Ceaser’s breakup.

Dutchess and Sky have had their fights in the past, with Dutchess verbally slamming Sky on a previous episode. Dutchess made comments about Sky’s relationship with her sons, and even fellow VH1 reality star Cyn Santana had something to say about it in a Twitter rant!

Whatever her fuckin name is Dutch dutches…what u kno bout how a mother feel about her kids????? Foh

Dutchess may be controversy’s favorite child, but the tattoo artist is bringing in the bling with her television appearances and earnings from her tattoo shop, Pretty-N-Ink.

Dutchess may not be liked by many of her fellow tattoo artists, but fans seem to love Dutchess from Black Ink Crew on Instagram!

The celebrity tattoo artist has 1.3 million followers and often takes to Instagram to post about her life, including a recent appearance at an assisted care facility.

The only time a Queen should hold her head down is to pray or adjust her crown. #dutchology ?

Shoutout to the Queen City Assisted Living staff for showing me so much love, I greatly appreciate it! ?

Dutchess is also busy with her tattoo shop Pretty-N-Ink and often posts about her store and tattoo designs.

Make sure y’all come through @pretty_n_ink704 this weekend for your next tattoo or piercing! We also have apparel and body jewelry available for purchase. ? #prettynink704crew

Dutchess is now discovering a new-found love for rap music. She released a new song a few months ago, which many people feel is aimed at Black Ink Crew members.

A clip of Dutchess dissing Black Ink Crew in her song “Mad” received over 131,000 views on Instagram.

I think we can safely say that there is mutual dislike between Dutchess and other Black Crew Ink artists, and it will be interesting to see how the drama further unfolds on this season!