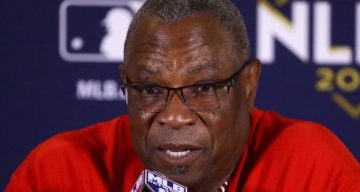 Washington Nationals manager Dusty baker was let go Friday and fans want to know what happened. With Dusty Baker’s record, there are some that are surprised to see the former coach get the boot. For more information, here’s a closer look with our Dusty Baker wiki.

Who is Dusty Baker?

Dusty Baker’s age is 68 years old and he was born Johnnie B. Baker, Jr. on June 15, 1949, in Riverside, California. He’s a former baseball player (jersey No. 12), who has played for the Atlanta Braves, Los Angeles Dodgers, San Francisco Giants, and the Oakland Athletics. He’s 6’2″ and played outfielder. Dusty Baker’s net worth is estimated at $20.0 million, and though Dusty Baker’s salary is currently unknown, it was reported that he was making roughly $900,000 salary with the Giants. On average, a manager of any MLB team is reported to make about $1.0 million in salary per year, but can vary based on experience and tenure.

Why was He Fired?

After two seasons, Baker is being replaced, though there was no clear reason given and both he and his coaching staff will have their contracts expired by the end of this year. The Lerner family, who own the Washington Nationals team, released a signed open letter about Baker’s dismissal.

“Even though this ultimately wasn’t our season, we remain devoted to that cause. In further pursuit of that goal, we have decided to make a change in leadership and begin the process of finding a new manager. This was an incredibly difficult decision for us.”

“Dusty Baker led the team to the first back-to-back division titles in our history and represented our club with class on and off the field. He is one of the true gentleman in our sport, and we thank him for the successes that we enjoyed together over the last two years. We wish him nothing but the best going forward.”

Despite not being able to bring the team to the National League Division Series, Baker has been coaching the team since 2015 and wasn’t expecting this to be his last coaching season.

“I’m surprised and disappointed,” Baker told USA TODAY Sports. “They told me they would get back to me and I told them I was leaving town yesterday and they waited 10 days to tell me.”

He added: “I really thought this was my best year. We won at least 95 games each year and won the division back to back years but they said they wanted to go a different direction. It’s hard to understand.”

Dusty Baker has been married to Melissa since 1994 and Dusty Baker’s son and daughter are Darren and Natosha.

The Team Liked Him

Baker’s loss isn’t taken lightly and he was known to have a great rapport with the team up until the news was announced.

“I think Dusty’s great. The whole coaching staff. … They do such a good job of making sure they relate to us. That’s a great group of guys in there. They’re just as much deserving of the success we’ve had as we are. They probably work harder than us, to be honest with you,” first baseman Ryan Zimmerman said last week. “I think everyone in this room would love to have them back.”

Baker’s dismissal is the fourth for the Nationals and they haven’t released any information on a permanent replacement.