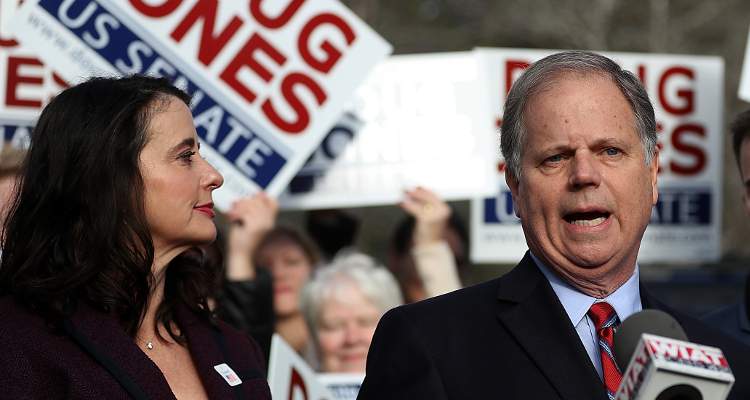 Democrat Doug Jones just won the Alabama State Senate after beating opponent Roy Moore, who faced sexual misconduct allegations. This is the first time in over two decades that a Democrat has taken office in Alabama. Doug Jones’ wife, Louise New Jones, stood by him throughout the election. Keep reading to know more about the new Senator’s wife right here in Louise New Jones’ wiki.

Doug Jones has always been about family values, and it shows. Considering President Trump’s faith in Roy Moore and the Republican history in the state, everybody thought that the majority would vote for Moore. But after Roy Moore’s sexual misconduct scandal, people began looking at Louise New Jones’ husband, Doug Jones, and now, the results are in his favor.

Here’s what we know about Alabama’s new power couple.

An Anniversary They Won’t Forget

Louise New Jones and Doug Jones have been married for 25 years. The best part about their silver jubilee celebration is that it coincided with the Senate election result day, so they had even more to celebrate!

Doug Jones won the Cotton State’s Senate election on December 12, 2017, exactly 25 years after he won the heart of his wife.

He stated on his campaign website, “My partner in this race and life is my wife Louise. Louise was raised in Cullman, Alabama and December 12th will not only be the Special Election – it is our 25th anniversary.”

Doug Jones credited his success to his family, especially his wife, saying that they give him joy and strength. He proved his mettle yesterday for his family, as well as for his voters.

Louise New Jones was among the women who spoke at the Women Wednesdays event. She was all in for roping in more votes when she said, “I think that it could not be more clear who is the best person to be the next Senator for the state of Alabama.”

Jones worked just as hard as anyone else in her husband’s campaign, and helped him do good in the community. She has been fighting hard with her counterpart, Kayla Moore, wife of Roy Moore, along with taking care of her other duties. She played a huge role in convincing undecided voters via phone and coffee chats, and as they say, hard work pays off!

Louise and Doug Jones have three children together—Courtney, Carson, and Christopher Jones. Courtney Jones married lawyer Rip Andrews, and they have given the Jones’ the happiness of being grandparents, too. She has two daughters, Ollie and Ever, and the Jones’ are more than proud grandparents.

Their second child, Carson Jones, is a graduate of the University of Georgia. He is studying zoo, aquarium, and shelter management at the Colorado State University.

The couple’s youngest son, Christopher Jones, is studying at a school in Alabama as a sophomore.

The whole Jones family is delighted to see their father sitting in the Senator’s chair. But, they generally keep a low profile, so very little is known about the family.

Why Did Roy Moore’s Campaign Take a Hit?

After what people are calling a “humiliating Senate result,” Roy Moore was deemed unworthy to have a position in the Senate. He was accused of being a pedophile, and his charges were made public.

Moore was accused of sexually assaulting and abusing young girls and women when he was a local prosecutor in his 30s. The skeletons came out of his closet after decades, which reportedly cost him his seat as Senator of Alabama. It was a well-deserved win for both Louise New Jones and Doug Jones.

President Donald Trump was quick to congratulate Jones on his win and said, “Congratulations to Doug Jones on a hard fought victory. The write-in votes played a very big factor, but a win is a win. The people of Alabama are great, and the Republicans will have another shot at this seat in a very short period of time. It never ends.”

What Is the Next Step?

Alabama is more than excited that after all these years, they have a person who will take the state forward. Hillary Clinton was one of the first few to congratulate Doug Jones in a tweet, “Tonight, Alabama voters elected a senator who’ll make them proud. And if Democrats can win in Alabama, we can and must compete everywhere. Onward.”

His voters are looking towards the future, and some even expressed their opinions.

“There is hope and joy. Tomorrow’s another day in Alabama,” a bartender said.

A healthcare worker added, “It’s incredible. I was hopeful but the fact it’s happened, I am at a loss for words. We finally have a person who will represent all of Alabama. I can’t believe it’s taken this long for people to realise that Roy Moore is not what he says he is.”

Congratulations are in order for Doug Jones, and his wife, Louise New Jones. We wish them the best of luck in the future.