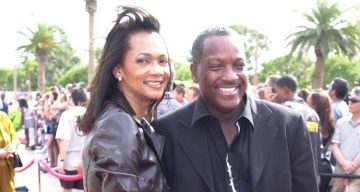 If you were wondering where DJ Donnie Simpson is, then we have an update for you! He will host the Tom Joyner Morning Show on until January 12, 2018. Simpson was going strong in his marriage to wife Pamela Simpson for more than 40 years, but it could have all ended with his infidelity! Read all about Donnie Simpson’s wife and how she saved their marriage, right here in our Pamela Simpson wiki.

Donnie Simpson began his radio career at the age of 15 and even did work in TV after his success. He got married to Pamela Simpson just three years into his career, and she has been his rock for over four decades now. Keep reading for interesting facts about the famous radio personality’s wife.

A Big and Happy Family

Pamela and Donnie Simpson were childhood sweethearts and have always believed in a loving family. The Simpsons are both from Detroit and got married when they were 19.

Pamela Simpson was an actress and model who calls herself “a retired cook,” too. She is truly a family woman who stood by her husband and made family her priority.

Simpson is a devoted mother and loving wife, and was always there for her husband, no matter the odds.

The Simpsons were very much in love and happy, until Donnie Simpson suddenly walked out on his wife and kids. He had a mid-life crisis and chose to spend his days with a younger woman at the time.

In an interview, Pamela Simpson said that he took them all for granted and acted like a fool. They split up and stayed apart for three years before they were back on speaking terms again.

The Simpsons’ marriage could have ended in divorce. But thankfully, it was salvaged with therapy. Pamela Simpson was a single mother with two teens at the time, and she tried her best to save their marriage.

On this Friday the 13th, My Boo and I are at the beach celebrating our 44th wedding anniversary. It’s hard to believe it’s been 44 years. Doesn’t seem like a week over 43. ? 44 is special to me because that’s Obama’s number. He & Michelle represent Love & Respect to me. I’m looking forward to our 46th, but I’m skipping 45.

A Ray of Sunshine

As they say, “home is where the heart is,” and Donnie Simpson’s heart always belonged to his wife. She was ready to take him back, but had conditions:

“I wanted my family together. But the only way I’d have him back is if he really wanted to be back and give 100 percent to the marriage,” said Pamela Simpson.

“I let Donnie know there was no revolving door,” she continued adding, “I don’t want my daughter to settle for less than she deserves. Donnie wasn’t going to have his cake and eat it too, at my expense.”

Donnie Simpson realized where he went wrong, and that leaving a strong woman like his wife was a big mistake. The couple got back together, and has stayed by each other’s side ever since!

One of my greatest joys is seeing my high school sweetheart now in the role of grandmother. A role she plays with the acumen of @merylstreep and @violadavis! I feel like I have seen her whole life. What a blessing she is! @mymajic1023 @ricchillthechiller @comiccop2

Donnie Simpson and Pamela Simpson now live in a lavish mansion in Maryland. The 17,000 sq.ft. home comes complete with eight bedrooms, 11 bathrooms, a classy pool, and a four-car garage. The interiors were chosen very carefully by Pamela herself.

The Simpsons are happy grandparents now and even made additions to their home for their grandbabies!

I have a new grandson!! My daughter, Dawn and her husband, John, delivered little Luca Clay last night and he’s precious. He’s now the little brother of 22-month-old Eden Star. I’ve been sick the last few days, so I couldn’t be there for the delivery. My doctor did allow me to go today, but only to look at him through the nursery window. That was good enough for me. I’m in Love again. This is what Dawn wrote on her Facebook page: Four weeks early according to the calendar, but right on time according to his Maker! So thankful to welcome our son, Luca Clay Mein, to the world on December 6, 2017 at 10:08 pm. Our hearts are full to overflowing!