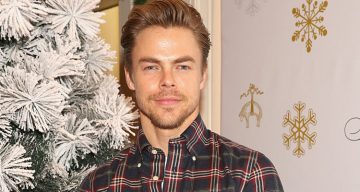 Earlier this week, professional dancer Derek Hough and his current Dancing with the Stars partner, 17-year-old Bindi Irwin, stunned everyone with their rendition of Dirty Dancing’s most famous sequence. But after five Dancing with the Stars wins, the famous choreographer, actor, and musician has decided to take a break from his hectic life.

Posting a scenic image of the sea, 31-year-old Hough announced his plans to take a month off, after the November finale of the show’s 21st season. With the picture, he shared an inspiring quote, “Travel doesn’t become adventure until you leave yourself behind,” and vaguely explained that he’ll be travelling for a month “to some of the most beautiful places on earth with a backpack and a camera,” adding that he “can’t wait to be reconnected to the unknown.”

"Travel doesn't become adventure until you leave yourself behind" In December I'm going on a month long adventure to some of the most beautiful places on earth with a backpack and a camera. I can't wait to be reconnected to the unknown . #dhoughphotography #adventure #PASSIONFORLIFE

Hough’s photo quickly gained over 42,000 likes and several comments that wished him well, along with a few suggestions of places for him to visit. One of several fans of his photography, wrote, “Can’t wait to see those photos.”

The Make Your Move actor’s Instagram feed features several breathtaking photos taken by Hough himself, with the hashtag, “dhoughphotography.” Often captioning these images with inspirational quotes, Hough has wormed his way into millions of hearts—including the Dancing with the Stars judges. In this season, it seems that he and the legendary Steve Irwin’s daughter, Bindi, have a really good shot at taking home the Mirror Ball trophy.