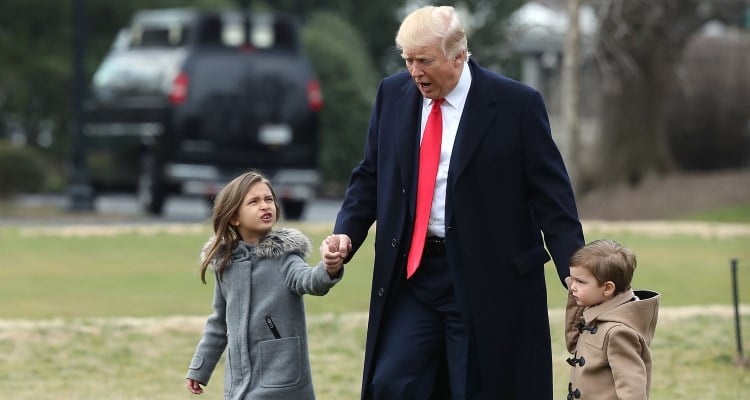 How Many Grandchildren Does Trump Have?

The president now has nine grandchildren, after the recent baby news. As many already know, the president has five children from three marriages: Donald Jr., Ivanka, Eric, Tiffany, and Barron. All of his children had major roles to play in the 2016 U.S. election and have remained in the spotlight in one way or another.

Donald Jr. and Vanessa (nee Haydon) got married in November 2005 and have five children together: Kai, Donald III, Tristan, Spencer and Chloe.

Ivanka and Jared Kushner got married in October 2009 and they have three children together: Arabella, Joseph, and Theodore. While Ivanka works closely with her father, her husband Jared is also one of the president’s closest advisers.

Eric, 34, and Lara (nee Yunaska), 34, got married in 2014 at the family’s Mar-a-Lago resort in Palm Beach, Florida. The new mother of one was born and raised in New Hanover, North Carolina and graduated from North Carolina State UNiversity with a degree in Communications. She’s a former personal trainer and producer for Inside Edition. A baby boy by the name of Eric “Luke” Trump Jr. was born on Tuesday and the news was announced on Twitter.

“@LaraLeaTrump and I are excited to announce the birth of our son, Eric ‘Luke’ Trump at 8:50 this morning,” Eric Trump wrote on Twitter.

President Trump congratulated his son on Twitter, saying: “Congratulations to Eric & Lara on the birth of their son, Eric ‘Luke’ Trump this morning!”

The rest of the family also rushed to send their well wishes regarding the newest addition to the Trump family.

Donald Jr. tweeted: “Congrats buddy. Welcome to the club. Now that the niceties are out of the way it’s older brother revenge for that drum set to my kids.”

Did a new war of sibling rivalry just start? What could possibly be louder than a drum set?

“Welcome to the world, baby boy. I can’t wait to meet you,” Ivanka wrote on Twitter shortly after the news was announced.

Now that there’s another Trump running around, many will want to see the newest grandchild, and Lara‘s Instagram might be the best place to start! She posts everything else up there so it’s expected that when the time is right, she will capture the perfect moment with her new son. The president has commented on his family genes in the past and likely won’t hold back on all comments of a family resemblance.