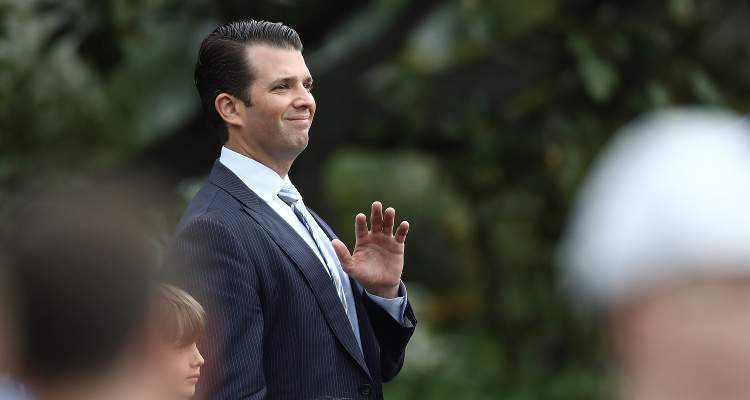 Donald Trump Jr. is being ripped apart on social media for his mini lecture on socialism, after posting a picture of his three-year-old-daughter and her Halloween candy. Trump Jr.’s quote about teaching her a lesson has landed him in a heap of online trouble.


Whether or not you follow any of the Trumps on social media, you know that they are constantly being trolled for their posts. Donald Trump Jr.’s Instagram account might only have one million followers, but he has over double that number on Twitter.

He is currently facing backlash for his post-Halloween photo of his little girl, Chloe which he captioned, “I’m going to take half of Chloe’s candy tonight & give it to some kid who sat at home. It’s never to early to teach her about socialism.” In light of this online controversy, here are some other Donald Trump Jr. quotes you need to check out.

An example of when the phrase “think before you speak” fits perfectly:

“I think there was a time in my life, probably in college, that I wished every guy was gay because it meant more woman for me! I don’t know what everyone’s problem with it is, I wish everyone was gay!”

Maybe we will see a Trump sporting line soon?

“My father knows more about sports than any human being out there. He relaxes. The ribbing that we give each at the Christmas holidays is incredible. He’s much more of an ordinary American and a proper American than a lot people would probably ever believe.”

A pre-teen Trump Jr. said something about his father that a lot of kids would not…

“How can you say you love us? You don’t love us! You don’t even love yourself. You just love your money.”

When he defended his actions about Russian collusion during the 2016 election:

“Russians make up a pretty disproportionate cross-section of a lot of our assets… we see a lot of money pouring in from Russia.”

“I can’t think of bigger lies, but that exactly goes to show you what the DNC and what the Clinton camp will do. They will lie and do anything to win.”

“Did I meet with people that were Russian? I’m sure, I’m sure I did … But none that were set up. None that I can think of at the moment. And certainly none that I was representing the campaign in any way, shape or form.”

But Trump Jr. is not all stark, he does have a great talent for being a successful businessman:

“…if you spend days walking in the African bush trailing Cape buffalo while listening to lions roar, you’re sure to learn hunting isn’t about killing.”

“When you have the opportunity to do something, you have to jump on it.”

“You’ve already lost the battle if you’re afraid to fight.”

“This country has had 200 years of hegemony over the rest of the world, and it feels like our politicians, they just want to give that back.”