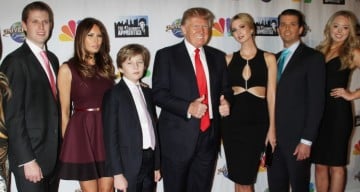 The Republican National Convention is at the midway point and, as expected, the candidate is Donald Trump. And after having his family speak about his qualifications, many people are looking for more information about the five Donald Trump children: Donald Trump Jr., Ivanka Trump, Eric Trump, Tiffany Trump and Barron Trump. However, it may be inappropriate to place them all under a banner like, “Donald Trump children,” because each is as unique an individual in comparison to their father as Donald Trump is to other people in politics. With that in mind, here’s some information about each of the Republican candidate’s five children.

The executive vice president of development and acquisition for The Trump Organization, Donald Trump Jr. has sought to earn what he has, once telling Time Magazine how the life of a “trust fund child”—a person born into wealth with a trust fund to do with as they please—did not suit him. He is currently married to model Vanessa Haydon, who was introduced to him by his dad, and they have two daughters and three sons together. He is also big into hunting, which has given him a love of nature.

Perhaps the most famous of the Donald Trump children and once called their father’s “favorite,” Ivanka Trump was the one who first suggested to her dad that he run for office. Also, as a Trump Foundation vice president, she has received a lot of attention recently for attempting to empower women through numerous campaigns, which seems to be clashing with certain comments made by her father. However, she believes his words were taken out of context and that, “He is not gender specific in his criticism of people,” but simply, “very blunt” and, “very direct.” She clearly has a lot of faith in Donald Trump, stating that she wouldn’t be the successful woman she is today without his love and influence.

In comparison to his other siblings, Eric Trump’s life may seem pale in comparison. The third of the Donald Trump children with first wife Ivana, Eric Trump went to a boarding school (like his older siblings) to avoid the media and currently serves as a Trump Organization vice president. His job sees him focusing primarily on the company’s winery and golf-related assets, having expanded the latter from three courses to 17 since joining the Trump Organization in 2013.

Tiffany Trump is 22 years old and was born to Donald Trump and his second wife, actress and TV personality Marla Maples. She has apparently chosen to take up modelling (after her mother), having walked a runway during New York Fashion Week (she has her mother’s legs, according to her dad), She also recorded a pop single, though it wasn’t well received by Amazon reviewers. And while she supports her father’s campaign (having spoken at the RNC 2016) she’s not completely opposed to Democrats. After all, she’s dating one named Ross Mechanic. She even brought him to the Republican National Convention!

Barron Trump is the youngest of the Donald Trump children and his mother, Melania, has often compared him to his dad, even going so far as calling him “little Donald.” Despite his young age and being the last in line for the Trump fortune, he leads a pretty sweet life for a kid. He has his own floor in the Trump penthouse and plenty of toys, preferring those that foster his creativity, such as Lego. He also likes spending time alone with his dad, having one-on-one dinners and playing golf together.