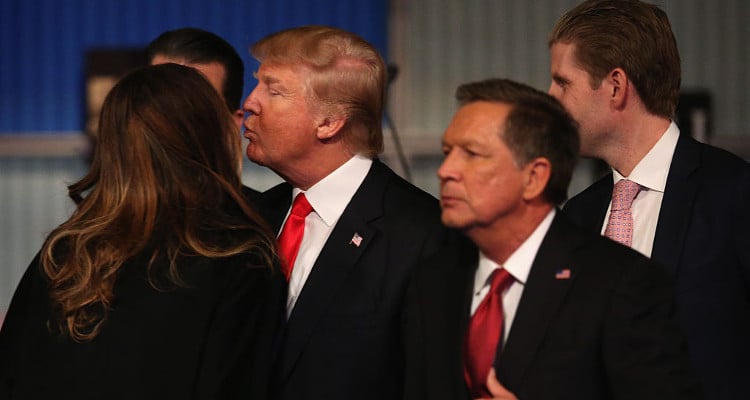 It seems that President-elect Donald Trump is expected to tab former New York City mayor Rudy Giuliani as his Secretary of State! As news buzzes about this possibility, a video is circulating the Internet of Trump trying to kiss a drag queen-attired Giuliani. The Donald Trump and Rudy Giuliani video shows Giuliani, dressed in drag with a lavender dress and a blonde, Marilyn Monroe-style wig, walking towards a clearly interested Donald Trump inside a New York City department store. The two engage in flirtatious banter that ends when Trump tries to kiss and grope Giuliani, but is clearly rebuffed when Giuliani slaps Trump. The “Donald Trump kissing Rudy Giuliani” video was taken from the 2005 documentary Giuliani Time directed by Kevin Keating. While the two never actually kissed, people are referring to the funny video as the “Donald Trump Rudy Giuliani kissing video.” Some find the video hilarious, but others are raising questions about how the two men will behave if the Rudy Giuliani Secretary of State expectations become a reality.

In light of allegations of Donald Trump’s views on women, his recent election victory and now his potential appointment of Giuliani as his new Secretary of State, this video of Donald Trump hitting on Rudy Giuliani while he’s dressed in drag could bring up some major questions on the abilities of both men to act professionally on the world’s stage. Giuliani spoke on Monday, sharing his foreign policy vision to the Wall Street Journal CEO Council. He expressed that he would prioritize dealing with ISIS and made some bold statements about Russia as a military competitor, “It [Russia] really isn’t. It’s our unwillingness under [President Barack] Obama to even threaten the use of our military that makes Russia so powerful.” Giuliani said the Trump administration would “prefer to engage with [China] on economic issues such a trade,” according to a CNN report.

Donald Trump’s cabinet is also rumored to have John Bolton, Richard Haass, Bob Corker, and Jeff Sessions as candidates for Secretary of State. “You’re going to see a number of different names that are ultimately becoming a part of the President-elect’s administration,” Transitions Communications Adviser Jason Miller said. “There will be non-traditional names, a number of people who have had wide-ranging success in a number of different fields; wide-ranging success in business.”