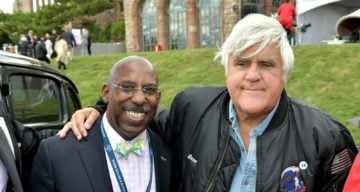 Jay Leno and Donald Osborne are seen at Audrain's The Gathering At Rough Point on October 4, 2019 in Newport, Rhode Island. (Photo by Paul Marotta/Getty Images for Audrain)

A new season of Jay Leno’s Garage brings back our favorite car appraiser, Donald Osborne. The car enthusiast has been giving viewers the lowdown on star cars for a long time. But his personal life has been elusive to his legions of fans. Social media’s car-collecting community is eager to know more about Donald Osborne’s family and if Osborne is in a relationship. Thanks to his social media, we get a glimpse at his adoring family and partner, and we reveal all about them here.

Donald W. Osborne was born on March 27, 1956, and hails from New York. He is currently based in Newport, Rhode Island.

Osborne graduated from Andrew Jackson High School in Queens in 1972 and attended the Hartt College of Music. He graduated with a BA in opera in 1977.

Osborne has worked in sales and branding for most of his career. Since 2004, he’s been the owner and operator of his eponymous branding and consulting firm.


While initially heading boards in the opera and music fields, he began contributing to sports car publications in 2000. He was a writer and auction analyst for Sports Car Market Magazine for over a decade. He was also the co-host of Discovery Channel’s What’s My Car Worth?, and contributed to the New York Times automobile section.

A noteworthy appraiser in the car collectors domain, he was appointed the CEO of Audrain, LLC in 2019. And you can tell his expertise from his regular appearances on Jay Leno’s Garage.

Donald Osborne is the youngest of four children born to Earle Osborne and Jimmie Lee Leneau Osborne. The family was based in New York, but in recent years has lived in different parts of the country.

Before he passed away, Donald’s father Earle served in the U.S. Army during World War II. His mother Jimmie had many roles in her lifetime before she passed away in Newnan, Georgia in 2017. But she is perhaps most remembered for her efforts to end racism.

An ordained Presbyterian elder of over five decades, she served on the Anti-Racism Task Force of the National Capital Union Presbytery and also worked in church schools. She served as a deacon, church school superintendent, and director of Christian education.

While in New York, Jimmie worked with multiple teachers and education organizations. She also encouraged Black youths to pursue a career in aerospace with the Bessie Coleman Aerospace Legacy, Inc.

Among Donald’s siblings, his brother Carl is continuing one of the many legacies their mother left behind. He is a flight attendant with United Airlines, works with ACE Academy (Aviation Career Education), and is part of the Organization of Black Aerospace Professionals.

Donald Osborne has been in a relationship with Frank Garofalo for decades. Connecticut native Garofalo currently lives with Osborne in Newport.

Garofalo studied literature at Rider University and special education and teaching at Saint Joseph College. In the ‘90s, he went back to school to complete his culinary certification.


He was the program director at the Italian Culinary Institute for Foreigners in Italy. He’s also been a director at culinary institutes in New York and Connecticut. He’s currently a culinary curriculum development specialist based in Newport.

He is fluent in Italian and French, which perhaps explains Osborne’s fluency and affinity towards the Italian culture beyond Italian-made cars. He occasionally shares his latest culinary creations, which he makes either with Osborne or as a surprise for him.