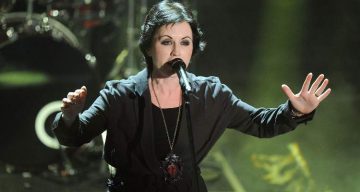 The music industry is grappling with Dolores O’Riordan death, who passed away on January 15, 2018. The Cranberries frontwoman was a multi-platinum artist with an estimated net worth $25.0 million at the time of her death, after leading the band to worldwide success.

Dolores O’Riordan, The Cranberries’ lead singer who rose to global success in the ‘90s, passed away on January 15 at the age of 46. With the band, she sold over 40 million records worldwide.

The latest estimates put Dolores O’Riordan’s net worth in 2018 at $25.0 million. But, how did she build her music legacy over a decade?

Here’s a breakdown of her career.

How Rich Was The Cranberries Singer?

– Irish-born Dolores O’Riordan was born on September 6, 1971; she was the youngest of seven children born to Terence and Eileen O’Riordan.

– Guitarists Mike and Noel Hogan, and drummer Fergal Lawler, were looking for a female singer for their band, The Cranberry Saw Us; O’Riordan auditioned and joined the band.

– After their first EP, the band shortened their name to The Cranberries and recorded early demo tracks of “Linger” and “Dreams” (their future hits); their demo had British labels scrambling to sign them.

Came across this today. Didn't even know I had it. #dream

– The Cranberries signed with Island Records and released the EP, Uncertain; the poor reception for the album led to the band parting ways with their manager, Pearce Gilmore.

– While recording their first album, O’Riordan and The Cranberries toured around the U.K. and recorded studio and live versions of their songs.

– With the release of their first album, Everybody Else Is Doing It, So Why Can’t We? in 1993, they enjoyed mainstream success, especially when MTV frequently played their videos.

'Zombie' was released 22 years ago this week!! The first single from our second album, 'No Need To Argue', made it to the No. 1 spot in Australia, Belgium, Denmark, and Germany and won 'Best Song' at the MTV Europe Music Awards. The 7" single was backed with the track 'Away' (later to be featured in the movie Clueless), while the CD formats added the previously unreleased 'I Don't Need', along with live versions of 'Waltzing Back' and 'Linger' (both recorded at the Fleadh Festival in June 1994). Who remembers buying this single from their local record store?

– The Cranberries sold 40 million records worldwide and won Best Song at the MTV EMA for their biggest hit, “Zombie.”

Dolores O’Riordan outside The Cranberries

– Dolores O’Riordan and her bandmates went on hiatus in 2003 after 13 years in the business; during that time, she embarked on a solo career.

– After appearing on albums by other artists, O’Riordan released her solo debut album, Are You Listening? in 2007; her second album, No Baggage was released in 2009.

– A decline in health forced O’Riordan to cancel tour dates in 2007. Instead, she performed in small American clubs to major acclaim.

– The Cranberries reunited in 2009 and toured around North America, Latin America, and Europe, performing Dolores O’Riordan’s songs from solo albums; they released their sixth album, Roses, in 2011.

– O’Riordan and bandmate Noel Hogan were locked in a legal battle for undisclosed reasons.

– The Cranberries’ 2017 tour was canceled owing to O’Riordan’s health issues.

– O’Riordan and her ex-husband, Don Burton, owned a 150-acre stud farm in Ireland; they sold in 2004 for an undisclosed amount.

– Dolores O’Riordan’s family moved to County Dublin and spent summers at a log cabin they owned in Canada.

Check out how Dolores O’Riordan compared to other artists in terms of wealth: