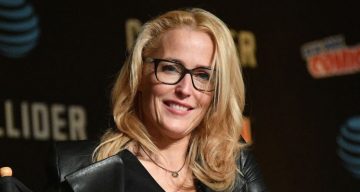 What is with Gillian Anderson’s raspy voice in the latest episodes of The X-Files? It was so noticeable that numerous online forums are filled with questions about it! Does Gillian Anderson smoke, or was she sick when they were filming? We took a deep dive into the topic, and might have a few answers for you.

Gillian Anderson on The X-Files is an actress who has a garnered a following that can best be described as loyal. From her first appearance on the show as Dana Scully over a decade ago, Anderson earned a fan base that follows her from project to project.

For example, between 2013 and 2016, she executive produced and starred in a show for BBC’s The Fall. The show picked up a very large North American following due to her involvement, which it probably wouldn’t have otherwise, considering its nature.

This following has been with her from The X-Files to American Gods. Those same fans notice when things change, like Anderson’s hair and voice.

While the actress has been a smoker on and off over the years, Anderson has a naturally deeper tone to her voice, which she exploited for years in The X-Files. She emphasizes that part of her voice for the role of Scully.

We believe that Anderson’s voice sounds harsher now because she’s just playing it up even more, especially since Scully has spent a bit of the latest season in pretty terrible condition. She’s been in the hospital, had seizures, and she’s on the run from the government. So, it’s no surprise she sounds a little rough!

Those situations can affect your voice. So, maybe Anderson is making her voice a little weaker and more raspy to add to the situation that her character is currently in.

To give her credit, Gillian Anderson has done such a good job of it that people are worried that she is now smoking 12 packs a day! Weirdly, we think that it’s a rather bigger compliment to her vocal skills!