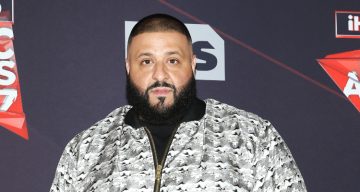 DJ Khaled is a very versatile artist. Besides being a radio personality, record producer, DJ, and an author, Khaled will also be gracing our TV screens by appearing as a celeb mentor for Alicia Keys on The Voice. In an interview with Extra, Alicia Keys said, “I feel like it’s so incredible to have the diversity that I’m able to bring to the show, especially through Khaled.” Keys further added, “I feel like there’s so many ways to look at music, there’s so many ways to create. It’s not just about being a great performer, it’s about being a personality, for the energy that you bring to come out. I think that is what Khaled does very naturally.”

Khaled now has another thing to add to his resumé. It goes without saying that he is a brilliant DJ and record producer, so he will definitely be able to guide and give insight on how to give a killer performance on The Voice stage. Now that we know that DJ Khaled will be Team Alicia’s advisor, let us get to know him better.

Khaled Mohamed Khaled (a.k.a. DJ Khaled) was born on November 26, 1975, in New Orleans, Louisiana. His parents are Palestinians, who immigrated to the United States. Khaled’s parents were musicians and played Arabic music, which is how Khaled got his knack for music.

His interest in rap and soul music began at a very young age. Fortunately, his parents supported the idea. To further pursue his interest in rap, Khaled started working in a local recording store called Odyssey.

During his early days in the music industry, Khaled formed relationships with several artists like Lil Wayne, Mavado, and Birdman. In 1993, while working at the New Orleans record store, he met and befriended Birdman and Lil Wayne. After resigning from Odyssey, Khaled started DJ-ing in reggae soundclashes, hip-hop, and dancehall.

DJ Khaled’s Net Worth and Book

@webuygold my new show The Bless Up soon come !! I’m watching your DMs on the @webuygold page. If you want to spend the day riding wit me, DM a video to @webuygold with your name, your city and why you need some BLESSINGS in your life. I’m grateful !! #WBGxTheBlessUp

According to sources, DJ Khaled’s net worth is estimated to be $30.0 million. Besides, his albums and songs, Khaled also earns money from promoting several products and endorsement deals. Khaled’s new book, The Keys was released on November 22, 2016, and includes his perspective on real life stories, success, and mogul talk. His book was well-received by readers and fans alike, who were anticipating the keys to DJ Khaled’s success.

Khaled has produced and released many albums and singles. His albums include Listennn…the Album, We Global, We the Best Forever, Victory, We the Best, Suffering from Success, I Changed a Lot, Major Key, and Victory. On February 9, 2017, Khaled revealed that his 10th album, Grateful would be released later this year. Last month, he released his first single from Grateful, “Shining” featuring Beyoncé and Jay Z, on TIDAL and iTunes.

Me and my son on set ? follow @asahdkhaled @jumpman23

DJ Khaled is not yet married, but he is engaged to Nicole Tuck. Nicole went to Marymount Manhattan College to pursue her undergraduate degree and then attended Fordham University to earn her masters degree. She began the clothing line, ABU Apparel in 2011, which DJ Khaled endorses. On October 23, 2016, Khaled and his beautiful fiancée welcomed their baby boy, Asahd.