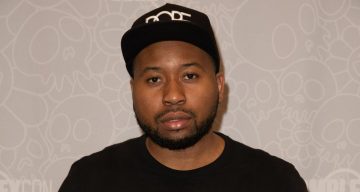 Known to be the king of hip-hop gossip, DJ Akademiks is now a legit rapper! The social media personality was a DJ before he took to hosting shows on YouTube. And today, he has become a go-to source for all things entertainment.

DJ Akademiks has been bringing us fresh deets on rapper feuds, baby mamas, and newest gossip around town, but speaks very little of himself. And there are many things about him that his fans don’t know about.

So, keep reading to know more about this social media personality with details from DJ Akademiks’ wiki.

Who Is DJ Akademiks?

According to some sources, DJ Akademiks’ real name is Livingston Allen, but he has refused to confirm this. He comes from Spanish Town, Jamaica, and he emigrated to the United States around 2001.

Born on May 17, 1991, DJ Akademiks is 27 years old. After he arrived in the U.S., he settled in New Jersey, finished high school, and attended Rutgers University.

At first, Akademiks was shy and reserved. He found it difficult to cope with the culture and would only hang out with his Jamaican friends.

When he was not in school, he would listen to hip-hop. He found solace in the genre and soon start rapping.

There is not much known about DJ Akademiks’ childhood as he is a very private person. He graduated with a bachelor’s degree in Biomathematics, which involves scientific research that aims to understand biological processes using mathematical models.

So, it appears that DJ Akademiks is rightly named!

A Career That Made Akademiks a Master

The young gun started DJing when he was in college, playing at the local barbecues and parties. He began uploading some videos of his music and soon became popular among the youth.

Akademiks then took his passion to YouTube and began posting videos. Today, his channel has more than 1.7 million subscribers, with millions viewing him regularly. Meanwhile, DJ Akademiks’ Instagram account has 1.2 million followers.

According to some sources, he tried his hand at music production first. But it was like trying to fit a square piece into a round hole.

Instead, Akademiks focussed on his DJ career. And he soon became everyone’s favorite on college radio and at parties.

DJ Akademiks then realized how powerful the Internet was in reaching out to people. He found a window of opportunity to make a strong career out of his skills and created the website, Late Night Creeps.

The website was all about the latest news in hip-hop, and there was no stopping DJ Akademiks after that. And although it was first used for clip notes, he turned the website into a proper blog and began reviewing and critiquing everything that happened in hip-hop.

His satirical style of commenting on issues has made him a favorite host and entertainment journalist.

Entertaining Every Day with Opinions

DJ Akademiks and his good friend, Joe Budden, were the hosts of the YouTube show called Everyday Struggle. It was a mega-hit among hip-hop lovers, as they received first-hand news through Akademiks and Budden on celebrities’ lives. He soon came to be known as “The Negrotiatior.”

The duo would also interview celebrities who would open up about their experiences. Sadly, Everyday Struggle came to an end after Joe Budden decided to call it quits in December 2017.

DJ Akademiks held the reigns for a while, but he probably did not like to fly solo. So, the show announced that they were shutting down temporarily.

Everyday Struggle returned on May 21, 2018, with new hosts Nadeska, Wayno, and, of course, DJ Akademiks.

While the new cast of the show might look very similar to that of The Breakfast Club, we’re sure fans of the show are more than excited to have Akademiks back with all his wacky opinions.

The funny yet on-point DJ Akademiks is making sure his fans get to see him more as a rapper and DJ and less as a gossip king. But he does have the best of both worlds!

Since his announcement of becoming a rapper (complete with face tattoos and all), Instagram users have been gushing over the news.

Akademiks, who partnered with Tekashi 6ix9ine as a ghost producer in the past for platinum-selling “Gummo,” has now dabbled in rap himself!

He announced on Instagram that his alter ego’s rap name would be Lil AK. He also said that he had signed a $6.0 million deal with Atlantic Records for mumble rapping!

Nonetheless, DJ Akademiks’ song, “Blues Clues,” is very real. It is available on iTunes for $0.99.

The song was released on April 20, 2018. And in the video, Akademiks appears in a double role as himself and Lil AK.

The video has received more than 1.9 million views on YouTube alone. So, we’re guessing that his rapping career is now pretty much underway.

DJ Akademiks and “Gotti” singer 6ix9ine have been friends from the beginning. And although Akademiks is mostly neutral in his relationships with his celebrity friends, he seems to have a soft spot for the rapper.

He is seen hanging out with 6ix9ine regularly and has “ghost” produced his song, “Gummo.” It received a shiny RIAA Multi-Platinum plaque after the song sold more than 2 million copies.

The song has received over 200 million views on YouTube, proving that the Akademiks-6ix9ine collaboration is working well!

Girl of His Dreams

DJ Akademiks is very picky about what he reveals about his personal life. But being the celebrity that he is, he sometimes likes to flex his girlfriend, Angelica!

The couple has been together for less than a year now, or so it seems.

Angelica is from the Dominican Republic, and she’s a pescatarian who believes in fitness. She is an Instagram model and has over 70K followers.

She loves to promote her boyfriend and is seen wearing his merchandise, including the “Chat N#gga” hoodie, which is regularly sported by Akademiks himself.

The DJ-turned-talk show host and now rapper has a loyal fan base. So, it’s no surprise that he has an online store which sells his merchandise.

He is seen sporting the infamous black hoodie with “Chat N#gga” written on the chest. And his fans can have them, too.

Shop.djakademikstv.com is the place where you can find tees, hoodies, and sweatshirts just like the ones Akademiks wears. The products range from $34.00 to $40.00 on the online store.

DJ Akademiks’ net worth is estimated at roughly $2.0 million, with his social media earnings amounting to $1,800 per endorsement post. He earns close to a million annually through his YouTube channel, DJ Akademiks, making him one of the most followed celebrities in the U.S.