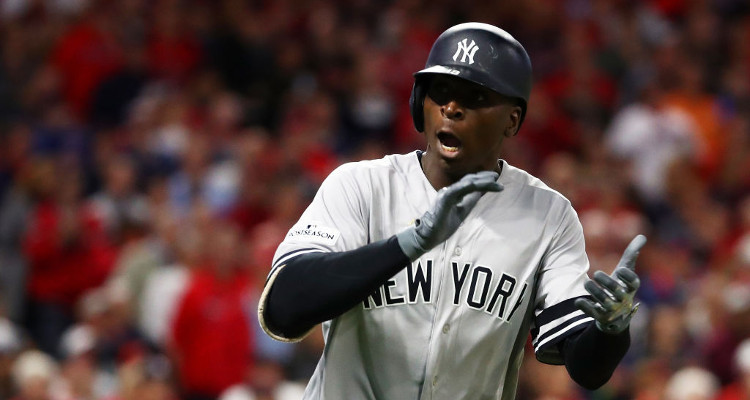 Born in the Netherlands but living in the U.S., Didi Gregorius is a star player for the New York Yankees and arguably the reason they recently made it into the A.L.C.S. His rare ability to consistently hit home runs is a big asset for his team, and has fans overjoyed in the stands. Gregorius is just 27 years old and on the way to becoming a baseball superstar. His girlfriend, Judy, is his biggest supporter.

Thanks to Didi Gregorius’ fantastic play, the New York Yankees beat the Cleveland Indians, 5-2, in Game 5 of the ALDS on Wednesday, October 11, 2017. Even though Cleveland went into the game strong, Gregorius turned it around by hitting two glorious home runs, propelling the Yankees to a surprise victory! After his game-winning performance, people are curious to know more about the shortstop, including details about where Didi Gregorius is from. Here are a few details from Didi Gregorius’ wiki.

Inspired by His Parents

Born on February 18, 1990, in Amsterdam, Netherlands, to Sheritsa Stroop and Johannes Gregorius Sr., Didi Gregorius’ age is 27. The Dutch professional baseball shortstop now plays in the MLB for the New York Yankees. He played for the Cincinnati Reds in 2012 and the Arizona Diamondbacks in 2013 and 2014. Gregorius inherited his love for baseball from his parents. His father was a pitcher for the Amsterdam Pirates, while his mother played for the Dutch national softball team. Gregorius’ love for sports began with tee-ball, and graduated to soccer and basketball.

Gregorius was noticed by a Cincinnati Reds scout in 2006 at an under-18 tournament in The Hague, and was signed on as an amateur free agent in 2007. He performed exceptionally well for both the Cincinnati Reds and the Arizona Diamondbacks before being acquired by the New York Yankees on December 5, 2014. After an initial struggle, Gregorius started increasing his batting average and became a valued player for the team. Didi Gregorius’ Yankees career is prominent, thanks to his unique ability to hit home runs. On June 21, 2017, he hit his 50th home run of his career, earning him a place as the Final Vote candidate for the 2017 MLB All-Star Game. Didi Gregorius’ stats currently read 635 games played, 2268 at-bats, 281 runs, 604 hits, and 67 home runs.

Gregorius has had a successful international career while playing for the Netherlands in the 2011 Baseball World Cup. He was an important part of the Dutch national baseball team, and after defeating Cuba in the finals, his team members were awarded the Order of Orange-Nassau, 5th class instead of prize money. Now, Gregorius rightly uses has “Sir Didi Gregorius” as his Twitter handle.

Didi Gregorius’ contract with the New York Yankees lasts one year and gives him a guaranteed salary of $5.1 million. This is way more than the $2.42 million he earned in 2016 and puts him in a very comfortable financial situation. There are no details about Didi Gregorius’ net worth at this time, but considering that his career as both an amateur and professional baseball player for almost a decade now, it must be substantial.

Last day of #playersweekend Rocking my @traxnyc LETS GET THIS W

Gregorius is not married, but he does have a girlfriend named Judy, who is a model and student from Curacao, Netherlands.  She speaks Dutch and is a big supporter of her boyfriend. Judy is a positive person and believes that “life is a story and you should make yours a best-seller.” Another belief of hers is that “being alive doesn’t mean you’re living.” With a supportive girlfriend and a warm family that encourages him, as well as a talent and passion for baseball, Didi Gregorius’ future looks very bright. If his performance against the Cleveland Indians is indicative of his future, then expect to see many more home runs from this exciting player!