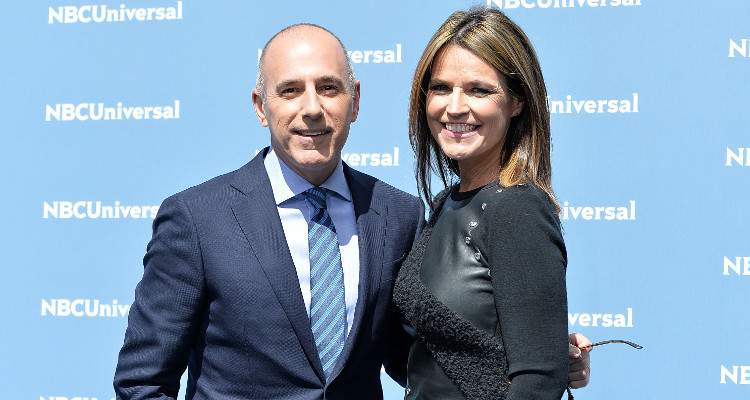 Much like Norah O’Donnell and Gayle King having to announce Charlie Rose’s firing from CBS This Morning, Savannah Guthrie and Hoda Kotb had to break the news of Matt Lauer’s ouster on the Today show. Guthrie spoke about the email from NBC News Chairman Andrew Lack explaining Matt Lauer was fired over allegations of sexual misconduct. But she didn’t stop there. She explained how heartbroken she is to learn about her colleague’s behavior. While many are praising her for her professionalism, some are asking about Matt Lauer and Savannah Guthrie’s relationship.

Morning shows on news broadcasts like NBC’s the Today show have a special place in attracting viewers. They sell the idea that everyone working on the show —the anchors, panelists, guests, crew— are family to build a connection with their viewers. In the public eye, Matt Lauer was known to be a doting dad of three, and happily married to his wife, Annette Roque.

Also Read: Did Matt Lauer and Natalie Morales Have an Affair?

Reality proved to be different. Andrew Lack informed the Today show anchors that the longstanding face of the show for 20 years, Matt Lauer was fired. Savannah Guthrie and Hoda Kotb broke the news live on air as professionally as ever. Guthrie announced that they learned of his dismissal via Lack’s email only moments before coming on air.

“As I’m sure you can imagine, we are devastated, and we are still processing all of this. And I will tell you right now, we do not know more than what I just shared with you,” she said, “But we will be covering this story as reporters, as journalists. I’m sure we will be learning more details in the hours and days to come, and we promise we will share that with you.”

She continued by expressing what most female anchors have gone through while reporting about their male counterparts’ termination over sexual harassment allegations. “All we can say is that we are heartbroken. I’m heartbroken for Matt — he is my dear, dear friend and my partner. And he is beloved by many many people here. And I’m heartbroken for the brave colleague who came forward to tell her story, and any other women who have their own stories to tell.”

Since Lauer became the crown jewel of Today in 1997, his female co-anchors rotated several times, from Meredith Vieira and Katie Couric, to Anne Curry and Natalie Morales, and now Savannah Guthrie. During his tenure, he was known to have tense relationships with Couric and Curry. He also has a notorious history of bad behavior which NBC top brass reportedly turned a blind eye to until now.

Annette Roque filed for divorce when she was pregnant with their third child. It was rumored that it had to do with his alleged affairs. But they reconciled soon after she filed the request.

He was rumored to be cheating on his wife with one of his co-anchors, Natalie Morales, who Roque was also reportedly against him working with. But both slammed the rumors as false. Morales said she was “shocked” to know he was fired and expressed support for the accusers.

Those in the Today staff who knew of Lauer’s misconduct, felt awkward when he spoke about Bill O’Reilly’s own sexual harassment scandal. It was a sort of open secret that he made crude sexual advances at women in the staff.

But there’s no evidence to prove that he dated any of his co-anchors. Neither Savannah Guthrie nor Natalie Morales were among the women he had a relationship with.

Kotb went on to speak of her relationship with Lauer saying, “I’ve known Matt for 15 years, and I’ve loved him as a friend and as a colleague, and again just like you were saying Savannah, it’s hard to reconcile what we are hearing with the man who we know. Who walks in this building every single day.”