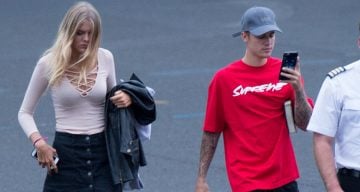 People are speculating that the whole mess between Bieber and his fans regarding his closeness to Richie is the root cause of their alleged break-up. Bieber made good on his threat that he would deny access to his Instagram pictures if his fans didn’t stop being hurtful to Richie. His fans continued to spew hate on Richie, which angered Bieber even more. To make matters worse, ex-girlfriend Selena Gomez also jumped in and added her share to this mess. She wrote that Bieber was over-reacting to his fans’ behavior and he should not post pictures of Richie if he couldn’t handle the ire of his loyal fans. Gomez did apologize later, but the damage was done.

Now, he is being seen with this mystery blonde girl in London. Who is she? She is Bronte Blampied, a member of the crew who was with Bieber when he was vacationing in Hawaii last month. Most of the time her face was covered but finally the paparazzi got some good photographs of her face that cleared the mystery of who she was. Not much was known about her until now, but things might change fast. Now that she has been seen with Bieber, the spotlight is on her. The media will try to bring details about her to the hungry public,  who is obviously wondering, “Is Justin Bieber dating Bronte Blampied?”

Too Soon, Too Early!

So, where does all this leave Sofia Richie? Maybe everybody is over-reacting to the whole thing. It’s too early to say that the budding romance between Bieber and Richie is over. It could also be that they have decided to keep it quiet after the fury over their closeness among Bieber’s fans. It could also be that Justin Bieber and Bronte Blampied are just friends! One thing is sure, Bieber can’t take a step forward without the media jumping on him. Being famous has it’s downside, as well.

For more on Justin Bieber and Sofia Richie, just click on:

Why did Justin Bieber Delete His Instagram? Angry Young Bieber!

Sofia Richie Wiki: Age, Boyfriend, Parents, Music and Facts To Know About Her