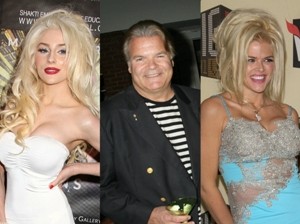 It’s barely been a month since Courtney Stodden ended her controversial May-December marriage to 53-year-old actor Doug Hutchison because she wanted to enjoy being single and to be “as much as a normal 19 year old” as she can possibly be. Stodden also made it clear that she wouldn’t jump into another May-December relationship with “another 50-year-old man.”

It looks like she may have spoken too soon. Stodden was recently spotted cozying up to 53-year-old Edward Lozzi at an event in L.A. Although her rep denied reports that they’re dating, the pictures sort of tell a different story—Lozzi has his arms around her waist in one shot, and another one shows Stodden dancing in front of him while he watches her.

Lozzi is exactly Stodden’s type—old and rich; he used to work as a White House aide, but now owns a successful public relations firm in Beverly Hills. And Lozzi is no stranger to dating sexy blondes; he dated one of the most famous ones, Anna Nicole Smith, before she died in 2007.

Nobody was really surprised when Stodden and Hutchison revealed that their marriage was over, given the celebrity couple’s 34-year age difference. It only took three years of marriage for Stodden to figure it out herself. “I think the age difference is 99.99 percent of it. I think I missed the experience of being youthful and being single,” she said in a recent interview. It also took her three years of marriage to realize that Hutchison was much older in more ways than age. “Our sex was good, I’m not going to lie, but I’m a young girl who wants to experience sex of all kinds and he’s an older man who’s slowing down a bit,” she said in a recent interview.

In any case, it looks like she’s enjoying her newly discovered life as a single woman. We’ll have to wait and see if she sticks to her guns about ruling out older men. If these pictures with Lozzi are any indication, being a sugar baby is a hard habit to break.

What do you think: Would you ever date a man who was more than 30 years older than you?