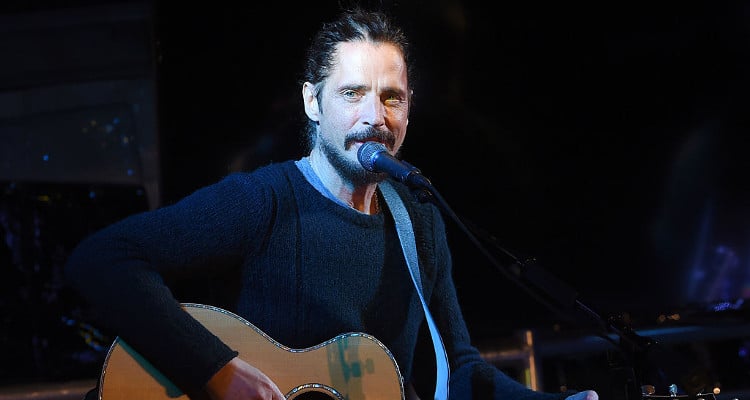 The cause of Chris Cornell’s death has been revealed. The lead singer of Soundgarden and Audioslave was found dead in his bathroom on May 18. His death has been ruled as suicide by the Wayne County Medical Examiner’s Office. Did Chris Cornell leave a suicide note? Why did the singer commit suicide? We have details below.

On May 17, 2017, Chris Cornell was found dead in his hotel room in Detroit. He was only 52 years old at the time of his death. The Wayne County Medical Examiner’s office released a statement confirming the singer’s cause of death saying, “The Medical Examiner has completed the autopsy on 52-year-old Chris Cornell, the Soundgarden musician who died last night in Detroit.” Adding, “The cause of death has been determined as suicide by hanging. A full autopsy report has not yet been completed. There is no additional information at this time.”

Why Did Chris Hang Himself?

It has been reported that Chris Cornell’s last words to his fans were, “I love you” before leaving the venue of his final show. He is said to have behaved normally and greeted fans and took selfies with them. Chris even told concert goers that he would see them at the band’s upcoming show in Columbus, Ohio. A member of his security team said that Chris did not show any signs of torment and was absolutely normal the night of his death. Once she could not reach the singer in his hotel room, his wife, Vicky Karayiannis, became worried about Chris and asked a friend to check up on him.

Security at the hotel had to force open his the door to Chris’ hotel room, where he was found dead on the bathroom floor. The autopsy report revealed that Chris hanged himself and was discovered with “a band around his neck.” However, further tests need to be done to determine if Chris Cornell was using drugs and if any narcotics played a role in his suicide. At this point, no suicide letter has been found, but according to Daily News, Chris Cornell had been taking Ativan, an anxiety medication prescribed to him. Reportedly, side effects of Ativan can include suicidal thoughts and impaired judgement.

“Chris, a recovering addict, had a prescription for Ativan and may have taken more Ativan than recommended dosages. The family believes that if Chris took his life, he did not know what he was doing, and that drugs or other substances may have affected his actions,” an attorney for the family, Kirk Pasich, said in a statement.

“I think of [my songs] as children with strengths, weaknesses & secrets that reveal themselves over time.”

Chris’ wife maintains that the singer showed no signs of being distraught and had no suicidal tendencies. She said she spoke to him twice —once during soundcheck and then after the show— before failing to reach him a third time.

Police spokesman Michael Woody said, “We are doing everything to look into this death. There is absolutely no motive at this stage for this suicide. But we hope to be able to bring closure for his family and his fans as soon as possible.” Although Chris Cornell did not leave a suicide note, investigators are still looking into the possibility of drug use.

Considering multiple reports have claimed that Chris was in good spirits after the concert, the possibility of an accidental suicide must be considered. There are fans who believe that his death is part of a bigger Chris Cornell conspiracy theory which, of course, cannot be confirmed.