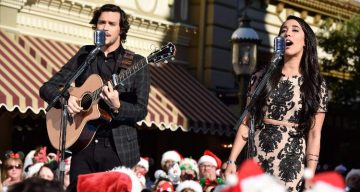 Note: We hope you love the products we recommend! Just so you know, Earn the Necklace may collect a small share of sales from the links on this page.

Alex Kinsey and Sierra Deaton won The X Factor and our hearts with their romance and music. But now, the duo announced their breakup and the dissolution of their band. What happened to Alex and Sierra?

Another X Factor group has reportedly broken up. In more ways than one, Alex & Sierra have called it quits a year after Camila Cabello left Fifth Harmony. True love is officially dead. This romantic duo that won The X Factor U.S.’s final season parted ways, both romantically and professionally. Why did Alex and Sierra break up? Take a seat and grab a tissue A&S fans. It’s going to get emotional. Here’s why our favorite duo split up.

Alex Kinsey and Sierra Deaton auditioned as a duo for the third season of The X Factor and blew away Simon Cowell, Demi Lovato, Kelly Rowland, and Paulina Rubio. With Cowell as their mentor, they won the competition. After their win, they released a studio album, It’s About Us, and most recently the EP, As Seen on TV.

But at the time, there were many, including the judges, who questioned the future of their relationship. As they predicted, Alex and Sierra eventually parted ways after eight years together.

They recently wrapped up their “Take Me” tour before posting a written statement on their official Twitter account: “We may be artists, but it seems the next words are some of the hardest we’ve ever had to write. Many of you have been keeping up with us for years; you watched us go from two kids who met on the beach in Florida in 2009 to a couple who won a TV show and released albums and toured the country. We’ve had an awfully magical time with each other and with you.”

Don’t miss the chance to get their album! Get it here at a great price!

According to the statement, they broke up a year ago but remained together professionally until the end of their tour. “Unfortunately, things change a lot in 8 years, and though we didn’t tell the public, our romantic relationship ended over a year ago. But as everyone does know, we’ve been best friends forever and really tried to keep A&S going. However, we’ve arrived at a point where it feels better to branch out rather than continue making music together.”

They continued the statement thanking their fans for their continued support saying, “Thank you to anyone who ever watched videos of us, bought a CD, came to see us live, bought merch, or simply enjoyed the music and listened and shared with friends.”

It’s hard to believe that the couple who couldn’t let go of each other’s hands in the auditions are no longer together. But that’s the sad truth.

The former couple ended their statement saying, “No band lasts forever, whether they dated or not, but we will most certainly last forever. We have a lot of love for each other and ALWAYS will, and we are the real people behind the screen you’re looking at, so keep that in mind before you say anything and please respect our privacy.”

The statement further added that their last album and tour weighed heavily on Alex and Sierra, who were no longer dating at the time. According to some reports, the stress of working together got to them, and they decided to part ways amicably.

There doesn’t seem to be any apparent negativity regarding their breakup and their relationship remains a beautiful one. They decided to remain friends and pursue their own solo careers.

While many A&S fans have been struck by grief, they understand and have expressed their support on Twitter. Alex and Sierra were overwhelmed by their sweet messages and thanked fans in a separate tweet.

Until Alex and Sierra announce their next ventures (or that this whole breakup thing is not true) we’re going to sit here with a tub of ice-cream, watching their old performances on The X Factor.

Crying reading your responses. Didn't expect such understanding and kindness. Truly love you ALL. Always.