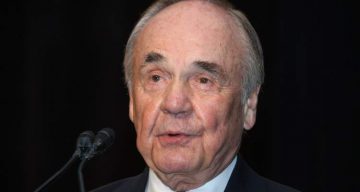 At 82, Dick Enberg’s net worth of $6.0 million is due to his long association with various sports channels, shows, and radio performances. Survived by his wife and six children, Enberg will be missed by the sports broadcasting community.

It is a time of mourning for the Dick Enberg household, as they discovered the body of the legendary sportscaster. Enberg was found dead at his home in La Jolla, San Diego.

According to his daughter, Nicole Enberg, he was due to fly out to Boston but never turned up. Enberg was apparently found near the door of the house, all dressed up and ready to leave. His wife believes that he could have suffered a heart attack.

Dick Enberg was born on January 9, 1935, in Mount Clemens, Michigan. Enberg graduated from Central Michigan University and completed his master’s and subsequently his doctorate degrees from Indiana University.

Dick Enberg’s career was spectacular, to say the least. He did his first radio broadcast of the Little 500 and was the play-by-play announcer for the Indiana Hoosiers basketball and football games.

Later, Enberg was appointed as an assistant professor and baseball coach at Cal State Northridge. He started working as a full-time sportscaster for KTLA television and at KMPC radio in the 1960s. Since then, he has been associated with many sports channels including ESPN, NBC, and the CBS.

Due to Dick Enberg’s TV shows and other professional commitments, his net worth is estimated to be around $6.0 million, according to sources.

Catch phrases such as “Oh, my!” and “Touch ‘em all” became popular, as Enberg used them frequently during his shows and other television appearances.

Dick Enberg leaves behind his wife and kids. However, Barbara Hedbring is not his first wife.

Enberg was married to Jeri Taylor in 1959. The couple divorced in 1975, and they both moved on in their lives. They had three children together—Alexander, Andrew, and Jennifer Enberg.