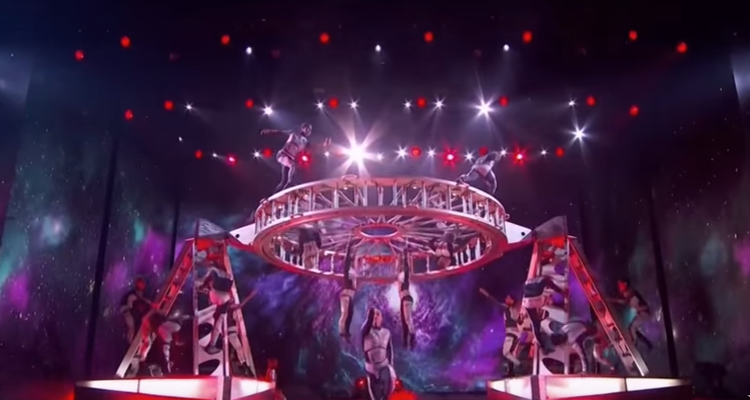 If you’ve been keeping up with this season of America’s Got Talent, then you may be wondering who Diavolo on AGT is, and where they came from. Diavolo on America’s Got Talent is an acrobatic dance group from Los Angeles, who has captured the attention of those, not only across the country, but around the globe! AGT’s Diavolo gave the performance of a lifetime last night, and their acro-dance stunts had all four judges on their feet! If you want to find out more about this amazing performance group, take a look at our Diavolo wiki.

The Diavolo dance group uses acrobatic stunts and dance to explore the relationship between then human body and its architectural environment—which explains their use of grandiose props. Founder Jacques Heim was born a raised in Paris, France, and moved to America after some troubled teen years. When he arrived in the U.S., his plan was to be an actor. But unfortunately, he couldn’t get the language down pact soon enough, so his friends encouraged him to take a stab at dance. As soon as he was introduced into the industry, Heim realized that dance was the outlet he needed to release all of his pent-up energy.

The idea to begin Diavolo, the architecture in motion group, came from a rather traumatic experience he had. When he was younger and living in an apartment building, an earthquake stuck and inevitably brought his community together; people were sharing water, food, blankets, and supporting each other with no expectations of their kindness being returned. Heim wanted to create a performance group where members depended on others for support, and where everyone offered their support no matter what. And thus, Diavolo was born.

Moving to the AGT Stage

For Diavolo’s audition on AGT, they chose to perform their “Trajectoire” piece, which represents the “visceral and emotional journey through the ebb and flow of the human experience.” Their performance was meant to portray the transcendence of the human soul as the dancers “struggled to find their balance on a voyage of destiny and destination.” Accompanied by a 3,000 lb rocking wooden structure, it was no wonder that the judges—and likely all of America—were floored by the jaw-dropping routine! Diavolo received a unanimous “yes” from all the judges, which sent them straight to the “Judge Cuts” episode.

They Made It to the “Judges Cuts”

Diavolo’s AGT “Judge Cuts’” performance was—if you can believe it—even more awe-inspiring than the first! They chose to perform a piece entitled “Passengers,” which included the acrobatic dancers leaping and dancing to and from stairs, a train set, and down a slide. They performed this routine, which seemed to have bodies flying across the stage from every angel at any given time, to Hidden Citizens’ cover of “I Ran,” originally by A Flock of Seagulls. As dictated on their website, this piece was meant to represent the themes of journey and transition, and the “transition and the tenuous balance we attempt to strike each say as both indomitable drivers and unwitting passengers.” The judges were unable to resist praising the group on their incredible dedication, co-ordination, and the sheer talent that it took to put their entire act together. This earned them a spot in the quarterfinals!

Last night, the group took to the stage for their fourth performance, which had the audience and judges glued to every aspect of their routine. Again, complete with a giant structure (that may have represented a time/space continuum), Diavolo brought yet another hard-hitting performance, that many are arguing may be enough to win them the competition. What else could this phenomenal supergroup have in their kitty?!

We’re positive that the final draft of AGT won’t be without Diavolo, as there hasn’t been a negative thing said about the group yet. Tune into NBC tonight at 8:00 p.m. every Tuesday to see what they have in store next, and if they have what it takes to win this thing!