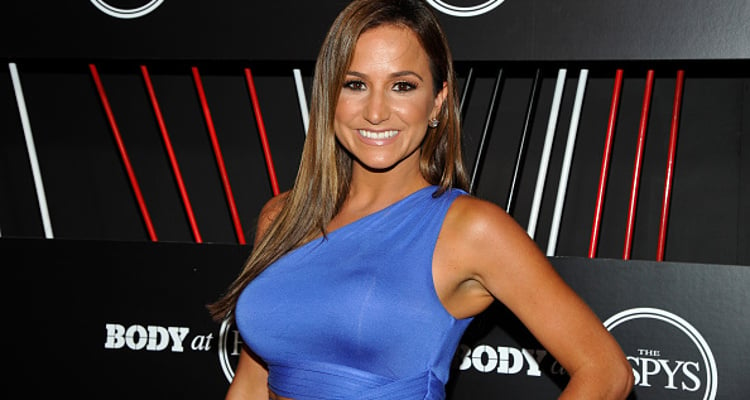 Dianna Russini has become a familiar face on ESPN. She brings us the latest updates straight from the football field, and fans can’t wait to see her again this NFL season! The ESPN NFL Live female host will make your day a little better with player interviews and more. Keep reading to learn more about her!

The first game of the NFL season starts on September 7, 2017, with the Kansas City Chiefs facing off against the New England Patriots. With four games left in the pre-season, fans are getting amped up! Some are almost as excited about the coverage than the actual games —especially with ESPN’s NFL Live female host, Dianna Russini broadcasting from the field. Take a look at Dianna Russini’s wiki, Instagram, and hot pics right here.

A Sporty Life for Russini

Dianna Russini was born on February 11, 1983, making her age 34. After a little digging through the otherwise private sports anchor’s life, we found out that she has two siblings (an older brother and a sister) and she grew up in NYC. Even at the age of five, she knew that she wanted to be a sports broadcaster. When playing with her siblings in the backyard, Russini would add commentary to her brother’s games. She went to Old Tappan High School in New Jersey and was very involved in sports, just like her brother who is four years older than her. “In high school, sports were everything,” she told The Spun. “I was the biggest jock. You think of a jock in high school and my picture is right there. I played soccer, basketball, softball and I ran track my senior year,” she added.

Russini then went to George Mason University, where she continued to pursue her love for sports. She played soccer in college, and she took on the challenge of reporting from the sidelines for Comcast SportsNet’s CAA basketball games. With her broken, rattled Ford Explorer, she would drive from Fairfax to D.C. for her Verizon Center’s in-arena hosting gig during the Wizards’ 2004-2005 season.

Looking for my hardworking photographers on the field. #redskins

A Career of Breaking News

Her competitive spirit grew, and Russini decided to report the news, as well. She worked as a crime and general assignment reporter for News12 in Westchester, and soon she saw herself in NYC reporting for NBC 4. During her time there, she helped sports anchor Bruce Beck cover Shea Stadium’s closing in 2008.

Throwback! Every time I say it's HOT lately…. I think about how cold I was here! #REdskins #nfl

Though it was a sad day for many fans, she found herself smiling, saying, “That was the first time in probably 10 months I had smiled on camera. I felt so comfortable. That was the world I had lived in forever. News was a challenge for me, but sports was natural.”

Seeing her reaction, Beck told her that news was probably not the best option for her career. Russini agreed, and worked for CSN Northwest where she reported for the Seahawk’s and anchored the Blazers’ coverage. It’s funny how news takes you places, and before she knew it, Russini was in Connecticut reporting for NBC. However, their sports coverage was minimal which is why, after a small stint there, she found her calling with ESPN.

Dianna Russini is now a public image, and she doesn’t fail to show off her amazing sporty life on social media. She seems to love her niece a lot, and her Instagram account is dominated by clips and interviews with players. Check out these top five Dianna Russini’s Instagram pics.

In sync on the soccer field…dance floor… and in life. @cwentzler Nothing changed in 3 decades except your last name. ❤️❤️ Lets never stop dancing together ?? (photo cred: @garyflomphotography)

Her inspiration and reason behind loving sports

My brother still wears the same shirts…I'm also excited that I knew floral skirts were going to be trendy in 2017 all the way back in '87. Thankfully my sister eventually joined us because the reality is, she was the only cute one my parents created.

We hated each other on the soccer field when we were kids then realized we were stronger, more powerful together. Joyful to be by her side on her big day. @cwentzler

Swipe left! Link in my bio if you care. Had the opportunity to talk about real issues women face covering sports and wear clothes that I absolutely love. Win, win. Thanks @athleisure magazine. You can read more about my colleagues too @antoniettaespn @moralesmorales amazing empowering women www.athleisuremag.com/mar-2017 and thank you @shirleysmu_ for makeup/therapy

Her favorite person in the world!

My god daughter is the best part of our family