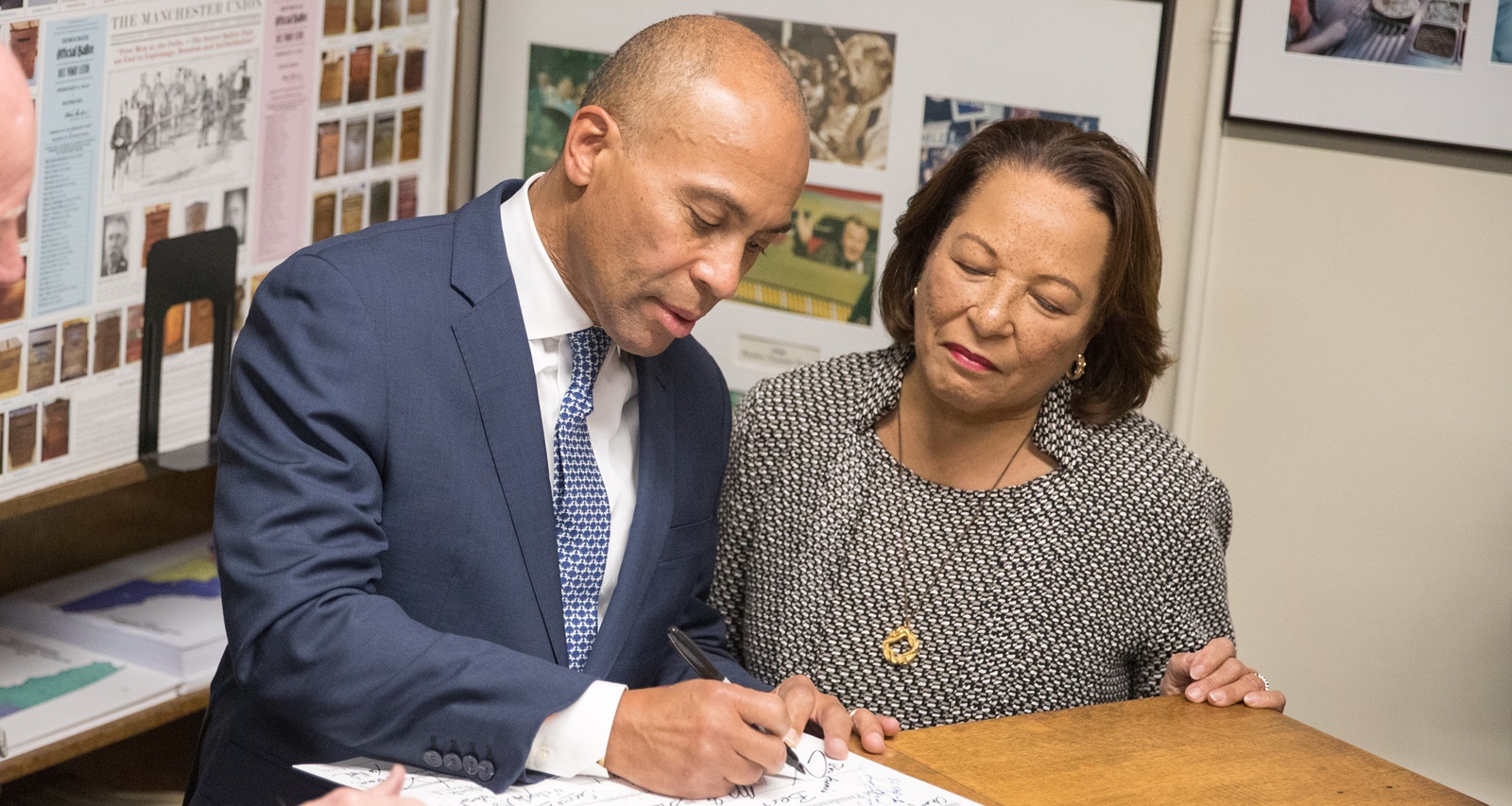 Former Massachusetts Governor Deval Patrick signs a board with signatures of other 2020 presidential candidates after he filed his paperwork to run for president in 2020 at the New Hampshire State House, alongside his wife Diane on November 14, 2019 (Photo by Scott Eisen/Getty Images)

Former Governor of Massachusetts Deval Patrick has announced a last-minute bid for the White House. With him joining the crowded 2020 presidential race, the spotlight has also fallen on his family, particularly his wife, Diane Patrick. The former First Lady of the Bay State used to be reluctant to get behind a political campaign. But after some major persuading by Barack Obama and Michelle Obama, Diane is backing her husband for the presidency. Her own background speaks of a remarkable legacy in politics, as you’ll see in Diane Patrick’s wiki.

Born Diane Bemus on December 17, 1951, she is one of three children of John Charles Bemus and Lillian Bemus. Diane, her sister Lynn Bemus Prime, and brother Jon Bemus are natives of New York, with a West Indian heritage.

Her grandfather is Bertram L. Baker, a member of the New York State Assembly from 1948 to 1970, representing Brooklyn. He was the first black person to be elected to any public office in Brooklyn. He was also the first African-American to have a leadership position in the State Legislature.

Baker passed away in 1984, but Diane and her husband Deval Patrick have continued his legacy, as Deval is the first African-American to serve as the governor of Massachusetts.

Baker’s eldest daughter, Lillian Baker, was a public school teacher. After Lillian married John Bemus, a biracial U.S. Navy veteran, they lived in Brooklyn before relocating to Queens with their kids.

John Bemus is the former owner of Bemus Electrical Contracting in New York. He passed away from cancer in 2015, at the age of 91. Lillian had passed away in 2009, on Diane and Deval’s 25th wedding anniversary.

Diane Patrick Is a Labor Lawyer

Much like her husband, Diane Patrick has had an extensive legal career. But first, she was a teacher like her mother. After receiving her B.A. in education from Queens College of the City University of New York in 1972, she worked as an elementary school teacher in New York.

She later moved to L.A., where she acquired her JD from Loyola Law School in 1980. Diane found a position in the Los Angeles-based firm, O’Melveny & Myers.

When she was a third-year associate, Diane and few colleagues were moved to her home state to establish the New York branch. While there, she worked as a labor and employment attorney.

After marrying Deval and moving to Boston, Massachusetts, Diane Patrick was employed by Harvard as the university’s attorney. Harvard would promote her to director and associate vice president of human resources in 1992.

But she’d return to her former labor attorney job, first working in D.C. for a year, and then returning to Boston to work at Ropes & Gray LLP. She kept her job even after Deval was elected, taking on more active responsibilities. Diane Patrick was appointed the chair of the diversity committee at Ropes & Gray in 2010 and made co-managing partner at the firm in 2013.

However, she ended up retiring from the firm and her law career in 2016, a year after Deval completed his tenure. There was speculation at the time that she would be helping Deval campaign for the 2016 presidential election. However, the Patricks had ruled out running for the White House back then.

Diane and Deval Married in 1984

Diane was previously married, though it ended in divorce. Back when she was Diane Whiting, she tied the knot with second husband, Harvard graduate Deval Patrick on May 5, 1984.

Diane’s sister Lynn was her maid of honor at the wedding in Deval and Diane’s Brooklyn home.

Shortly after assuming office in 2007, Deval Patrick addressed the media saying that Diane would be taking a timeout from her very public role as the First Lady of the state as she struggled with depression. Since then, the couple has been very open about her personal mental health struggles.

While explaining that her personal difficulties were magnified in the political fishbowl, Diane also revealed that she’d suffered alleged abuse in her first marriage. It was why she made spousal abuse her platform during Deval Patrick’s tenure.

She used to keep her depression to herself, afraid about how her fellow attorneys or clients would react if they knew. Diane did overcome her illness with the help of a therapist, but it all came rushing back with the new stressors of being a political wife.

Diane spoke about resisting seeking help, fearing what others might think. But since opening up about it, she has received an outpouring of support and compassion.

Deval was reluctant to seek presidency even though he is seen as a strong candidate in the Democratic Party, because he didn’t want to put his wife through the campaign wringer. However, it appears that Barack and Michelle Obama, who have made no secret about their confidence in Deval Patrick as a presidential candidate, convinced both Diane and Deval to campaign for the 2020 presidency.

Diane and Deval Have Two Daughters

The Patricks are parents to two adult daughters, Sarah and Katherine. Their younger daughter, Katherine, made headlines when she publicly came out as a lesbian in 2008.

Deval Patrick was among those in public office who led state lawmakers in voting down an anti-gay marriage amendment to the Massachusetts Constitution in June 2007.

Katherine Patrick was extremely proud of her father, who reportedly didn’t know she was gay at that time, as he campaigned for marriage equality. She came out to her parents a month after the historic event, and both Diane and Deval were very accepting of her news.

Sarah Patrick married Marco Morgese, an Italian and former soldier, in 2011. Diane and Deval became grandparents for the first time when Sarah gave birth to a son, Gianluca Noah Patrick Morgese, on May 20, 2013.