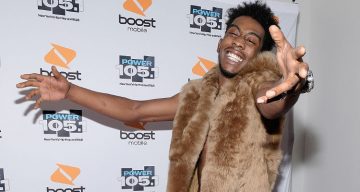 Hip-hop artist, Desiigner has dropped the video for his song “Zombie Walk” from his debut mixtape New English. Here’s everything you need to know about Desiigner’s latest video.

After the successful Billboard Hot 100 topping single, “Panda,” hip-hop artist Desiigner has released a nearly 10 minute video for his song “Zombie Walk,” featuring King Savage. The song is from his debut mixtape, New English, which was released back in June. The song first debuted in December 2015, but that doesn’t make the video any less amazing. Just in time for Halloween 2016, Desiigner is seen turning into the undead in the music video.

Desiigner shared behind the scenes shots of the music video on his Twitter page. The nine-minute short film-style video is directed by Grant Curatola, and the chilling animation is done by Pixel Pirate Studio, under the direction of Carl Jones.

The cinematic music video begins with Desiigner on his way to a party. Like any horror flick, his car breaks down and he has to hitch a ride from a stranger. In a scary turn of events, the driver turns into a zombie. Desiigner gets chased by the zombie through the woods with no help in sight. The live-action scenes are mixed with a few animated parts where Desiigner turns into a zombie himself.

“Zombie Walk” by no means is inspired by The Walking Dead or the zombie apocalypse. The story behind the title of the song is a heartwarming one, as Desiigner explained in an interview. The song is about King Savage, who is the featured artist in “Zombie Walk,” and is Desiigner’s childhood friend. He was born with a rare condition that resulted in the curvature of his joints and he is unable to walk normally.

King Savage had a tough childhood struggling with his condition, and the bullying that came as a result, but the two artists stuck together. Regarding the song title, Desiigner said, “He walks a little funny. So when I made the song, I was boosting this information. I made that point, ‘Yo we gonna make a song called ‘Zombie Walk,’ it don’t matter how you walk.'”