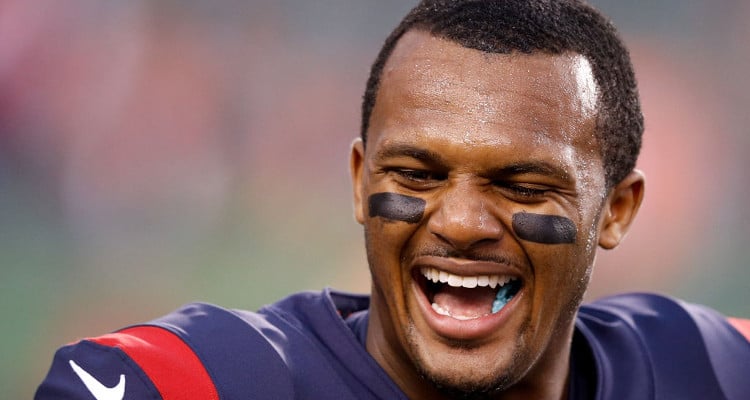 Although Dallas Robson and NFL player Deshaun Watson have been seen together in public several times recently, it is not very clear if they are still a couple. Robson has not been posting pictures with Watson on her social media accounts, while Watson himself has been quiet about her. Does this mean that the couple are no longer together? Nobody seems to be sure, and they are not saying anything to clarify the matter.

Who is Deshaun Watson? He is a quarterback for the Houston Texans, and played college football at Clemson University, where he led his team to a national championship game appearance in 2015 and a win in 2016. He was selected 12th overall by the Houston Texans in the 2017 NFL draft.

It is not clear at the moment whether Dallas Robson is still Deshaun Watson’s girlfriend or not. While they have been seen together recently, a look at Robson’s Facebook account tells us a different story.

Robson is from Gainesville, Georgia, where she first attended Gainesville Middle School and later Gainesville High School. Watson went to the same high school and the two started dating after a while. Being tall (5’7″), Robson played basketball and football in high school until she graduated in 2016. She was also captain of the varsity team.

The Picture Is Unclear

It is a bit unclear if Robson and Watson are still together or not. The two used to post multiple photos of each other on Instagram and other social media accounts. But lately, Robson has stopped posting any photos or news about Watson. That might suggest that things have cooled down between the couple. Then why was Robson supporting Watson at the NFL draft way back in April? Things are confusing, aren’t they?

There’s more! Robson’s Facebook account currently says that she is single! It could mean that she hasn’t updated her account for a while, isn’t currently using it, or they are no longer a couple. However, there have been other incidents that make us believe that Robson and Watson still have a thing for each other.

According to reports, Robson traveled to Cozumel, Mexico, this past June. It was during the NFL off-season, which means that Watson may have been there, as well.

And what about the incident where Watson got kicked out of a bar in Alabama earlier this year. The rumor was that he was kicked out for being Robson’s boyfriend, after a video surfaced of the staff allegedly asking him to leave.

The rumor stemmed from another rumor that Dallas Robson’s ex-boyfriend was there at the time. From the video, it looks like she was there with Watson when he was “kicked out of the bar” and was a witness to the whole incident. The bar, which is an Irish pub in Tuscaloosa called Innisfree, released a statement denying they kicked him out:

“Over the years we have had thousands of visitors from rival schools and have always treated them fairly. Today was not any different. The unfolding of today’s events were not led by our staff or anyone employed by Innisfree Irish Pubs. Unfortunately a customer attempted to invoke the right to refuse service on our behalf and after being identified, was immediately asked to leave the premises following the incident. We apologize for any inconvenience this incident caused to our customers. We appreciate anyone that chooses to visit our establishment and hope to continue welcoming sports fans for years to come.”

It looks like at the time, Robson and Watson were still together, as she seemed to be with him during this incidient, which occurred in April.

That feeling when you see a few open days in your schedule and immediately start to plan a trip back to DC… how about I come crash @publicbar_dupont's NFL kickoff night ? who do y'all have winning that game? Chiefs (lol) or Patriots?

There is no information on Deshaun Watson’s dating timeline, so we can’t tell you who he dated before (or after) Dallas Robson. However, he does seem to have a big fan in Mia Khalifa, the former adult film actress and current DC Sports Girl.

Khalifa recently tweeted out for Watson’s birthday with a video of the two playing basketball at her home. Before anybody jumps to conclusions, Khalifa made it clear that nothing romantic is going on between her and Watson, and the two are “just friends.” Now, where have we heard that before?

So, as of now, it appears that Robson may still be the only woman in Watson’s life, even if the signals from them are confusing. Then again, couples make up and break up faster then can keep up with, so it’s possible the two has already parted ways.