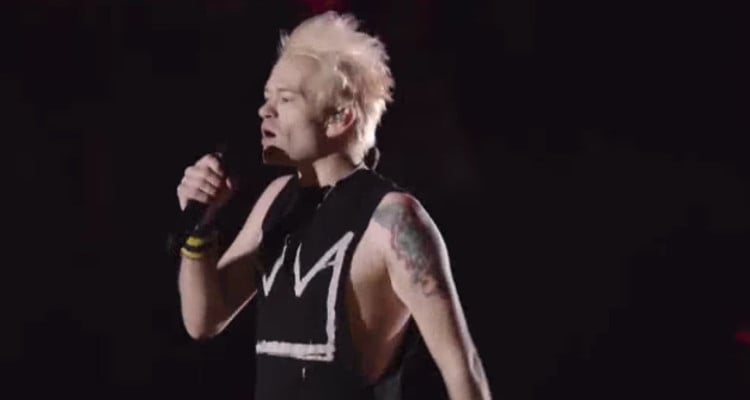 On October 28, many artists performed to pay an emotional tribute to late singer Chester Bennington. One of the performers was Sum 41’s, Deryck Whibley. In fact, Deryck Whibley’s wife also attended the tribute show and had great things to say about it. Whibley has been married to Cooper now for two years. If you want to take a look at Ariana Cooper’s hot pics, then hang on, as we have selected 20 pics from Ariana Cooper’s Instagram account.

Many artists took over the stage on October 28 at Linkin Park’s power-packed concert honoring Chester Bennington. Singers and artists such as Alanis Morissette, No Doubt, Blink-182, and Sum 41’s Deryck Whibley took part to sing their songs. He was a last-minute addition to the concert.

The singer sang “The Catalyst” and fans were swooning to his voice. It was indeed a perfect night. Not only for the audience, but also for Whibley’s wife, who couldn’t be more proud of her husband.

Deryck Whibley and Ariana Cooper walked down the aisle on August 30, 2015, in Los Angeles. They got married at Hotel Bel-Air with close friends and family present at the venue.

A source close the couple revealed, “It was a chill and intimate ceremony. They had a violin play at the ceremony and the music was mellow, not typical rock that Deryck’s band plays, which was surprising.”

The newlyweds cut the cake and enjoyed an apple cider toast instead of a champagne.

Their wedding planner, Christine Zohrabians, said, “Their love for one another is contagious. They spent the day smiling and giggling and set such a comfortable tone for the wedding.” She further explained that she had an amazing time working with both of them.

Ariana Cooper is a model, and unlike her husband, there is not much known about her. Cooper and Whibley give all of us major #relationshipgoals.

If you want to have a look at a couple of Ariana Cooper’s stunning photos, then you can do so below.

Too lazy to wash my hair this morning…or to wash the paint off my arms. ??‍♀️

When it is officially summer. ?

#4. The Art of Posing Underwater

Going through our wedding day over and over, I can't believe it's almost been a year. #finallypickingoutweddingphotos

#10. Hitting the Ceiling in a Good Way

Greetings from me and my super awkward body. ??

#15. Chilling in Style with Her Man

The perfect day with the perfect man @sum41 ??? #vacation#nyc#centralparkchillin

I wish I was at the beach…#summer#LA#work#tb

Deryck, you are the center of my life and marrying you was the best idea I've ever had. You have not only pulled yourself out of hell, but you have saved me as well. No matter how dark life has ever felt, you have always been there to remind me of all of the beauty still left in it. These past two years of being your wife have been unreal, you are the most supportive and unconditionally loving husband. I am not scared of anything because I know I will always have you by my side. I know it sounds lame, but I have fallen deeper and deeper in love with you every single day. Thank you for being you and for choosing me. #herestoforever

So, which one is your favorite? Let us know your opinion in the comments section below.