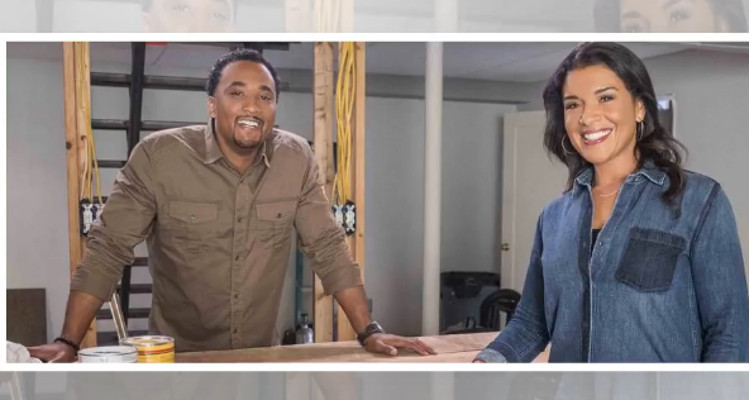 HGTV is reviving its flagship show and bringing it to Nashville. DeRon Jenkins and Page Turner are making their TV debut on Flip or Flop Nashville, not as clients but as contractors. They’re taking over the reins from Tarek and Christina El Moussa in the home-flipping spin-off.

Keep reading to know more about the former footballer and new star on HGTV right here!

His First Love was Football

Before flipping houses, DeRon Jenkins had a long-running relationship with football. He was the star of the football team at Ritenour High School in St. Louis, Missouri. Jenkins went on to play collegiate football at the University of Tennessee, where Peyton Manning was his junior.

Interestingly, Peyton Manning had to wait until he was drafted in the NFL to claim his prized No. 18 jersey. During his time in the Tennessee Volunteers, the No. 18 jersey belonged to Manning’s upperclassman, Jenkins.

He Played in the NFL

DeRon Jenkins was a second-round pick in the 1996 NFL draft when the Baltimore Ravens selected him. He spent the first four years of his pro career with the Ravens, where he started 30 of 63 games and recorded 202 tackles, two interceptions, and a sack.

Jenkins signed with the San Diego Chargers before the start of the 2000 season, starting 14 of 15 games with them. He signed with the Tennessee Titans in 2001, and during that single year he played with them, he recorded 41 tackles in 6 games.

The 44-year-old’s house-reno career began when he was a rookie in the NFL. Two years after being drafted by the Ravens, Jenkins bought his first home. The house needed a lot of work before he could live in it.

DeRon Jenkins’ HGTV bio states, “To his own surprise, he decided to tackle wide receivers and DIY construction.”

And #suddenly this happened to us @deron_jenkins !! #swipe⬅️ to see my reaction when @hodakotb came out on @todayshow !! ?? #yesicried ???? …And @deuces1966 was amazinggg!!! Hope you loved our segment☺️ And tune in TONIGHT for the series premiere of #fliporflopnashville on #hgtv 9|8p ????

“I really had no idea what I was doing,” recalled the athlete-turned-contractor. “I just came up with some ideas of how to finish out the basement and add a bathroom, and I added a room for a pool table. Before I knew it, I renovated this home. And so that was always in my back pocket.”

Jenkins’ natural talent for redesigning homes wasn’t explored again for most of his football career. But the ideas kept flowing and it was something he couldn’t let go of.

The former football star calls his house-flipping process “DeRoncizing.” He searches for new ideas everywhere from the Internet to other people’s homes, including homes in other countries. Jenkins then adds his own personal touch or style with the inspiration he gets from perusing homes.

“I look at the way other people do things and take bits and pieces of that and add my own spice to it, and kind of create my own idea,” said Jenkins.

From the Football Field to Flipping Homes

When Jenkins signed with Tennessee, he was back in the city where he went to college. The return ignited his passion to renovate. So after hanging up his cleats, Jenkins turned into a licensed contractor and started his own business in his favorite city of Nashville.

“My mission ever since has been to transform this city one house at a time,” Jenkins said.

DeRon Jenkins is accomplishing this with Page Turner’s help. He and Turner go back 10 years and have an interesting history.

The new Flip or Flop duo used to date, but they broke up. They now maintain an amicable relationship as they beautify houses throughout Nashville.

Many would feel iffy about working with an ex but not Jenkins and Turner. He has an adorable friendship with the real estate broker, which they spice up with some humor. But how do these exes get along so well?

“The secret is respect and trust. We respect each other,” dished Jenkins. “We feel like we both are at the top of our craft. We work well together as far as trusting. I know what she’s gonna do, she knows what I’m gonna do. Our expectations of each other are very realistic. We make it work.”

OMG!!! The countdown is on for an all new Flip or Flop Nashville on 1/18/18!!!! I hope you are as excited as I am!! Vision building works! Dreams can be realized! When you work plans, they work for YOU! #setyourdvr #please&thankyou❤️ #fliporflopnashville #fliporflop #hgtv #flippers #realestate #entrepreneurship #reallife #ificandoitsocanyou #dothework #egap #jopa #nashville #lifechangers