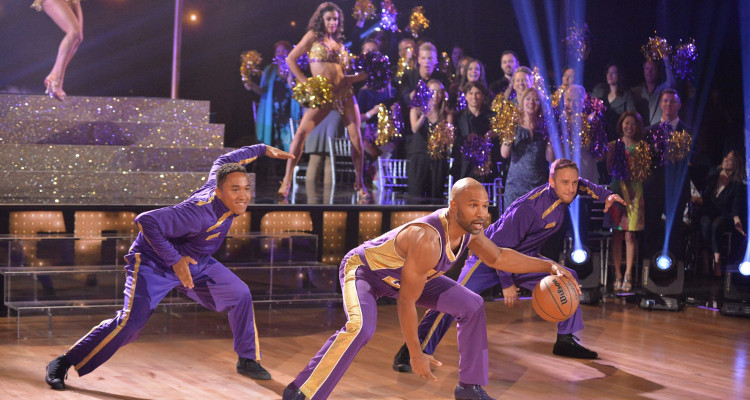 NBA legend Derek Fisher’s Dancing with the Stars debut definitely took viewers by surprise. Who knew he was so light on his feet? Derek Fisher and Sharna Burgess performed the Foxtrot this week, following their basketball-themed dance from last week. Proving himself to be quite the contender, Derek Fisher from DWTS has garnered attention from viewers across the nation. Want to find out more about this NBA icon-turned-ballroom beau? Then have a look at Derek Fisher’s wiki.

Before entering the NBA, Derek Fisher, age 43, spent his youth in Little Rock, Arkansas. He was an avid player on his high school basketball team, playing for Parkview Arts and Science Magnet High. Fisher was drafted in 1996 by the Los Angeles Lakers, and played more than 18 seasons with them, winning five championships with the team. During his time with the Lakers, he also held the position of President of the National Basketball Players Association.

Derek Fisher’s Career after the Lakers

As soon as he retired from playing basketball, Fisher was offered a position as the head coach of the New York Knicks. When he accepted this offer, he cemented his place as the first NBA player ever to go straight to a head coaching job after playing on the court.

Two years later, Fisher moved to Los Angeles to work as a professional broadcaster. He’s made appearances on networks like TNT, NBA TV, and SportsNet. Making frequent appearances on Inside the NBA and Player’s Only, Derek Fisher often gave his commentary on basketball games, working alongside the likes of Shaquille O’Neal, Grant Hill, and Brent Barry.

After spending decades fostering his career in the NBA and sports entertainment industry, Fisher decided to give back to the community and started the Derek Fisher Basketball Academy. Founded in 2009, this organization aims to develop the basketball skills in youth, as well as leadership and overall life skills.

With such a rich career in sports, you may be wondering about Derek Fisher’s net worth. A five-time championship winner and the previous head coach of the Knicks, it may come as no surprise that Fisher’s net worth it valued at a whopping $40.0 million.

As for his personal life, Derek Fisher and wife Candace Fisher were divorced in 2015, and now share custody of their eight-year-old twin boys. They endured a quite public, tumultuous divorce. TMZ reported that his wife was “completely ‘blindsided’ when the NBA legend served her with divorce papers … and was even more shocked that he moved all of his stuff out of their home in the middle of the night.”

As for his social media presence, Derek Fisher’s Instagram is always updated with the latest news about what he’s up to. Recently, he’s shared quite a few pictures of himself and his DWTS partner, Sharna Burgess.

He also shared an adorable video of him chatting with his parents, telling his mom that he’d be on this season of the dance show, which just happens to be one of her favorite programs. He captioned the video, “When your mom finds out you’re going to be on her favorite show @dancingabc, with @sharnaburgess #DWTS #TeamHoopsAndHeels.”

When your mom finds out you’re going to be on her favorite show @dancingabc, with @sharnaburgess #DWTS #TeamHoopsAndHeels

As for his performances on the show, he’s definitely giving the other contestants a run for their money. He and Burgess scored 19 points out of a possible 30 for their Foxtrot.

Fisher received feedback that included encouragement to work on his technique from Len Goodman and Carrie Ann Inaba told him to try not to dance as “small.”

To see what Derek Fisher and Sharna Burgess bring to the table for their next performance, tune into ABC tonight at 8:00 p.m. EST.