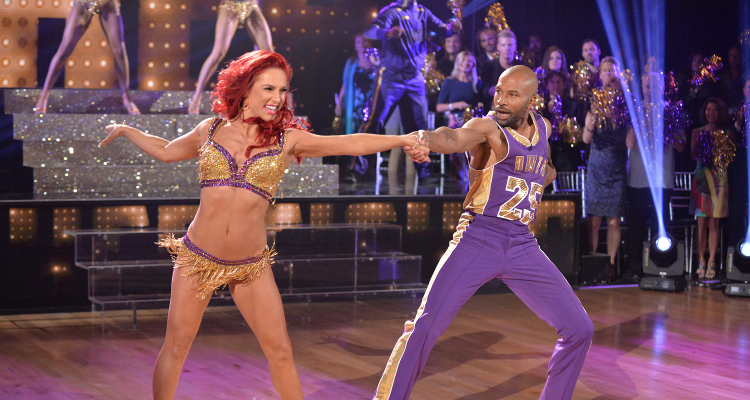 Will basketballs be flying around on the dance floor? After all, it’s not every day that a pro athlete like Derek Fisher signs up as a contestant on Dancing with the Stars.

Last week, when being questioned on what fans can expect from the dancing duo, Derek Fisher replied, “There’s going to be some basketballs flying around a little bit.” He definitely delivered because Derek Fisher and Sharna Burgess danced to Kurtis Blow’s “Basketball.”

Fisher also said, “Sharna’s amazing! I’m hoping I can keep up, but I’m excited and looking forward to it for sure. Sharna is a firecracker. She can get after you, but she’s really patient.” He continued, “She’s really sure of what she wants you to do, but sometimes it’s hard to translate what you know in your mind and give it to someone else. She’s been great to work with, and I think we got a good chance. As long as I listen to her, we have a good chance.”

After hearing this, we can’t wait to watch Derek Fisher and Sharna Burgess’ performance. Although Fisher is a five-time NBA champion and is well-versed with hard work and crazy practice times, he admits that dance training is completely different than what he’s used to.

We thought you’d like to know more about this unique pairing. So, here’s everything you need to know about Derek Fisher and Sharna Burgess on Dancing with the Stars.

Derek Fisher is currently a basketball coach and a former basketball player. He played 18 seasons in the NBA and spent most of his career with the Los Angeles Lakers. With them, he won the NBA championship five times.

Fisher’s accomplishments also include serving as the President of the National Basketball Players Association. And most recently, he served as the head coach of the New York Knicks in the NBA.

After proving himself as a great athlete, Derek Fisher is now on Dancing with the Stars to prove himself yet again. But this time, with a little poise and elegance in his movements.

A two-time runner-up on the show, Sharna Burgess is definitely a strong contender in Dancing with the Stars season 25. She is a professional ballroom dancer from Australia whose journey as a dancer started at the age of five when she began training in jazz, ballet, and gymnastics. She started learning ballroom at eight, and went on to earn both local and national titles.

At the age of 15, Burgess was selected to represent Australia in both standard and Latin styles at the World Championships. She also performed at the 2000 Sydney Olympic Games closing ceremony.

Also Read: Vanessa Lachey and Maksim Chmerkovskiy on “Dancing with the Stars” 2017: Down but Not Out!

Since season 16, Burgess been a constant as a dance pro. During season 20, she was paired with Noah Galloway and made it to the finals, finishing in third place. And in season 21, she returned with Nick Carter as her partner and finished in second place.

The audience has seen this lady’s talent time and again. And fans are hoping she takes home the Mirrorball Trophy this year.

With a decent score of 18 out of 30 during the premiere, the couple started off on a good note. Sharna Burgess’ talent as an ace choreographer is well-known to the world, and Derek Fisher is trying his best to keep up. Together, they are tough competition for the rest of the Dancing with the Stars cast.

Now that the excitement is well underway, let’s see who takes home the Mirrorball Trophy!