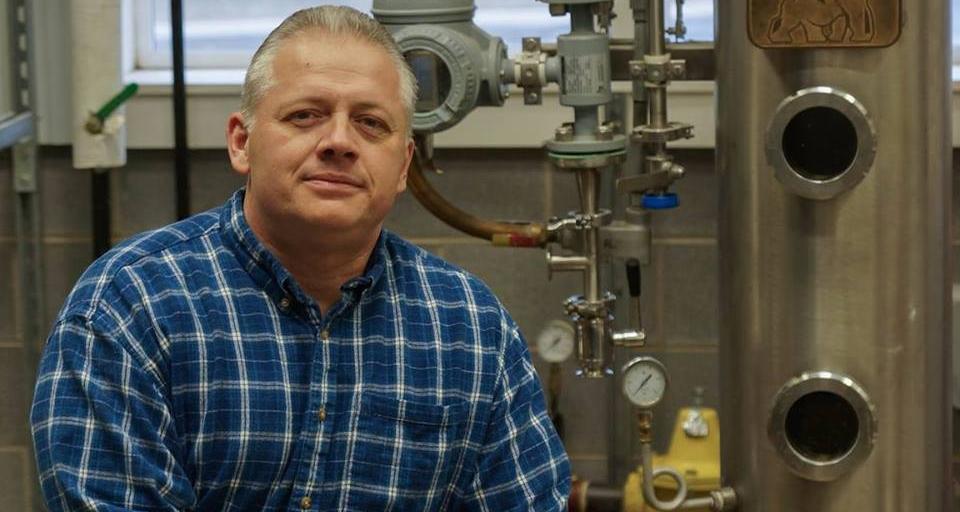 Just when you thought politics couldn’t get more bizarre, the race for the House of Representatives from Virginia’s 5th Congressional District took an unusual twist. GOP candidate Denver Riggleman’s opponent has called him out for being a “devotee of Bigfoot erotica.”

The contentious House race for Virginia’s 5th Congressional District just reached a whole new level of hilarious for the Twitterverse. Denver Riggleman entered the race to replace Rep. Tom Garret (R) when the incumbent announced he wasn’t seeking re-election. And it has since become a controversial campaign.

We’ve got Denver Riggleman’s wiki to elaborate more on his off-beat fascination for Bigfoot.

Riggleman Co-Authored a Book on Bigfoot

Both candidates from Virginia’s 5th Congressional District are facing heat from books they have written.

Leslie Cockburn has been accused of anti-Semitic writing in her 1991 book, Dangerous Liaison: The Inside Story of the U.S.-Israeli Covert Relationship.

Denver Riggleman has reportedly co-authored the book, Bigfoot Exterminators Inc. The Partially Cautionary, Mostly True Tale of Monster Hunt 2006. He also supports decriminalizing marijuana and opposes the Atlantic Coast Pipeline. But no one’s talking about that.

It appears that Riggleman’s connection to the story that mythological enthusiasts have been hunting the truth for, goes a lot deeper.

She accuses Riggleman of being a “devotee of Bigfoot erotica” in the tweets. Cockburn also accuses him of aligning with white supremacists.

The caption in Riggleman’s post indicates the image is the cover art for a book he’s writing on Bigfoot.

“I hide nothing in this magnificent tome. Don’t erase the censor box…” he captioned.

This is not the first time in the campaign period that Riggleman’s fascination for the mythical beast was a topic of discussion.

Journalist David Wasserman mentions a now-deleted Facebook page promoting his book, The Mating Habits of Bigfoot and Why Women Want Him.

Riggleman Said the Images Were a Joke

Denver Riggleman’s Instagram is private. But his interest in Bigfoot is evident in his Facebook posts, which include the images Cockburn shared. Further, his response to Cockburn indicates that the images were truly posted on his page. 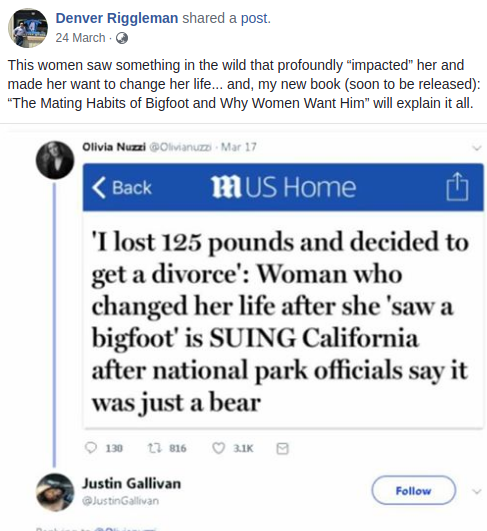 But that’s not all Riggleman is being accused of. He campaigned with a self-proclaimed white supremacist named Isaac Smith, alongside other neo-confederate factions. His stance on white supremacist groups is still not clear.

He, however, wrote an op-ed for a local publication condemning white supremacists.

Cockburn’s supporters advised her to stick to important issues instead of using ridiculous and irrelevant tactics against her opponents.

He Was in the Air Force

Denver was born and raised in Virginia. He played football at Stonewall Jackson High School.

He has an A.A. from Burlington County College in 1996, an A.A.S. degree in Avionics Systems from the Community College of the Air force in 1996.

Riggleman grew up in Charlottesville and returned there in 1996 to attend the University of Virginia on an Air Force scholarship. He acquired a bachelor’s degree in foreign affairs in 1998 with a focus on Yugoslavia’s ethnic strife. He also received a Master’s Certificate in Program Management from Villanova in 2007.

After graduating, he served in the fighter wing and bomb squadron at Mountain Home Air Force Base, Idaho and in the National Security Agency (NSA) at Fort Meade, Maryland.

Riggleman fought against Serbian forces in the Kosovo war. He was among the first teams deployed to counter the Taliban after 9/11.

Since leaving the Air Force, Riggleman has served as CEO of defense contracting companies. He also ran an unsuccessful campaign for governor.

He Owns a Distillery with His Wife 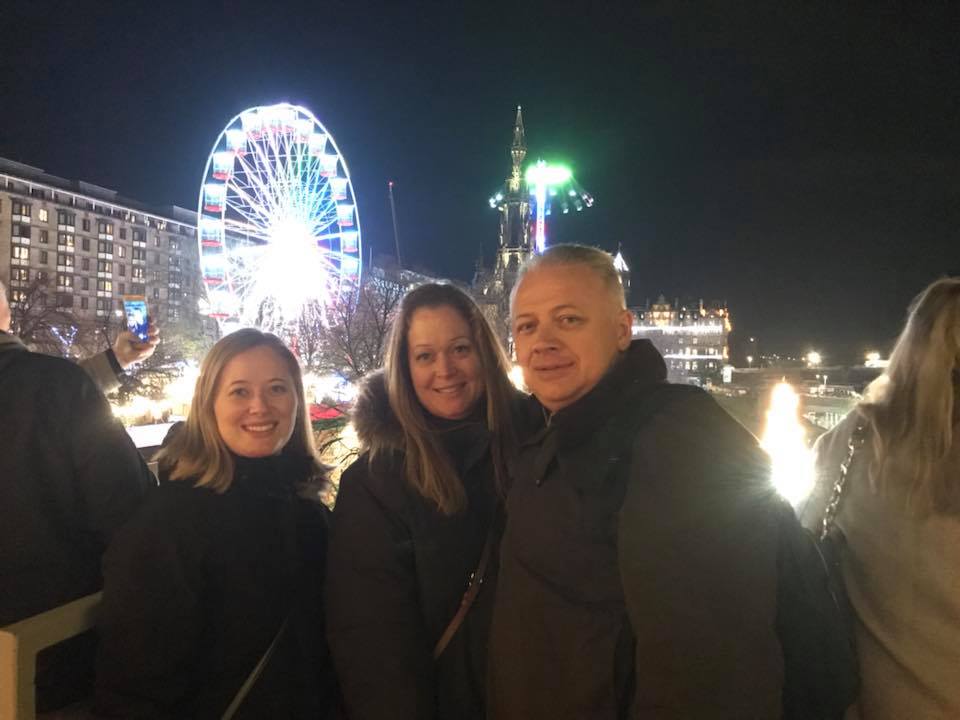 In 1989, Riggleman married his wife, Christine, and they are parents to Lauren, Abigail, and Lillian Riggleman. Christine Riggleman came from a long line of distillers.

On a trip to Scotland, Riggleman’s wife declared to him that she was going to make whiskey. And that’s how the couple started Silverback Distillery in Afton in 2013. The name comes from the couple’s “three wonderful, wise-ass daughters” making fun of Riggleman’s prematurely graying hair.

Christine Riggleman is the heart and soul of Silverback. She distills and distributes the gins, vodkas, and whiskeys.

Their daughter, Lauren Riggleman, graduated from the University of Virginia and studied brewing and distilling in Scotland. With a master’s in fermentation sciences, Lauren and Christine Riggleman run the family-owned business together. 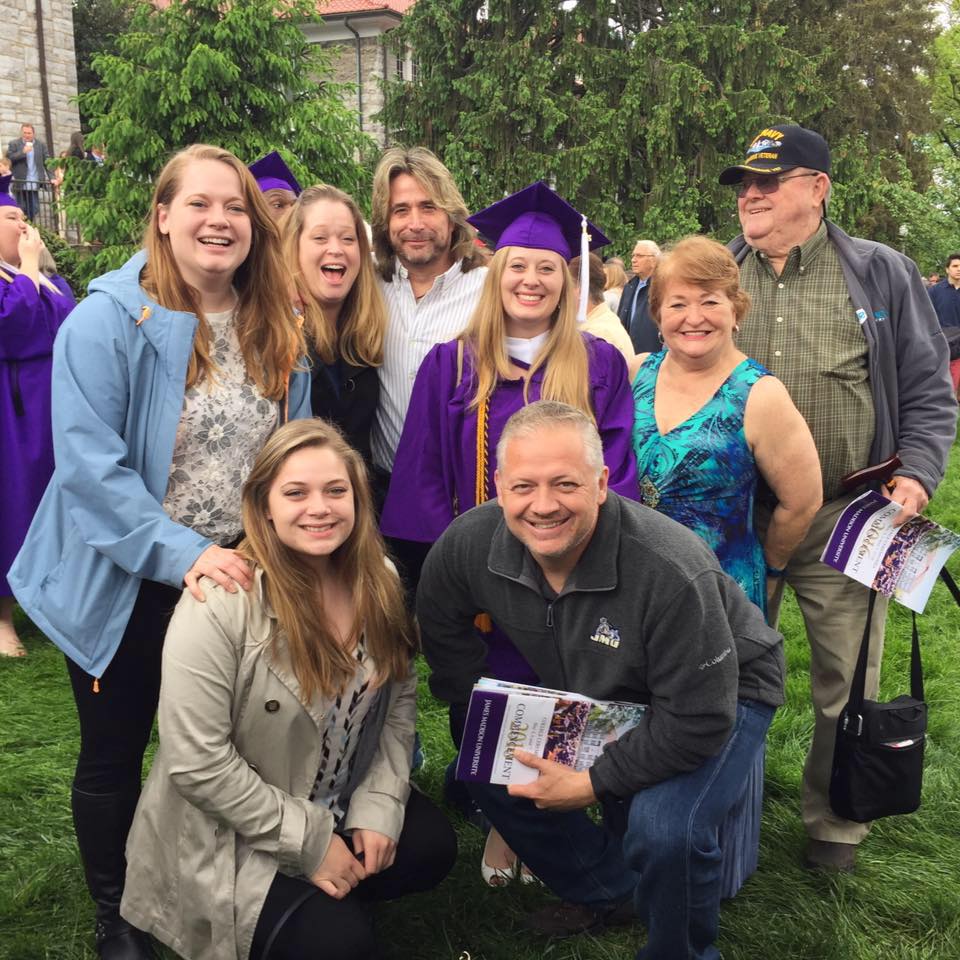