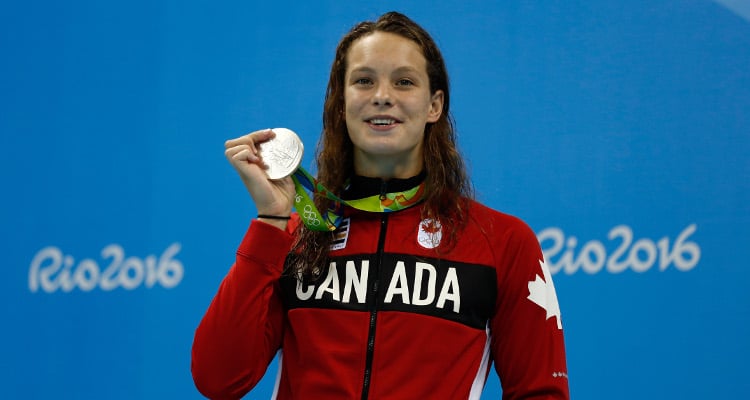 Denis Shapovalov proved that his tennis skills are beyond his age and experience when he was up against Rafael Nadal. The teen played on home soil at the Montreal Rogers Cup and impressed even Nadal!

Tennis fans might be fawning over the sport’s rising star, Denis Shapovalov after his breakthrough play at the Rogers Cup recently. But for all his skills, there’s one person he can’t get to play tennis. Denis Shapovalov’s rumored girlfriend, Penny Oleksiak, is also an athlete, but plays a different sport. Together, they might become the next Canadian sports’ cutest star power couple! But why won’t Oleksiak pick up a racket? Find out in our Penny Oleksiak wiki.

She is a Swimmer

The 17-year-old Penny Oleksiak is a competitive swimmer, Canada’s youngest Olympic champion, and youngest gold medalist. She won four medals at the 2016 Rio Olympics —one gold, one silver, and two bronze. At the 2015 FINA World Junior Swimming Championships, she won a whopping six medals! She made world records at 15 and broke them when she was 16.

She is one of the country’s top female athletes at such a young age! When she was nine, Oleksiak learned how to swim just enough to stay afloat while she played Marco Polo in a neighbor’s pool. Encouraged by her father, she took up competitive swimming. But swim clubs in Toronto rejected her because she couldn’t complete the requisite laps.

Eventually, Gary Nolden of the Toronto Olympian Swim Team tried to fix her messy style. By the time she was 11, she was swimming on the national team and caught the attention of Olympic swim coach, Ben Titley. Before long, she was raking in medals and setting records.

OLYMPIC BRONZE MEDALISTS!! Thanks so much to my whole relay you guys are amazing

She Comes from a Sporty Family

Penelope “Penny” Oleksiak is the youngest of five kids born into a family of athletes. Her parents were college athletes, with her mother holding records in backstroke and freestyle swimming. Her father was a multi-sport athlete who played basketball, football, and field athletics. One of her brothers, Jake, played hockey in the NCAA, and the other, Jamie Oleksiak, is an NHL defensemen playing for the Dallas Stars. One of her sisters, Hayley, is a rower at the Northeastern University.

These are the moments we live for❤ thanks to everyone for all the support going into this race.. so happy to have come out with this medal????

Penny Oleksiak is 6’1”, and had an impressive stature even as an 11-year-old kid. The length of her limbs and the way they moved in the water caught Ben Titley’s attention first. He recounted the first time he met the prodigious young swimmer saying, “I said, ‘Hi I’m Ben,’ and I shook her hand, and I said, ‘Holy s**t! Her hand is the same size as mine!’”

While they talked about their favorite styles, he noticed her large build and asked how tall her dad is. “And she laughed and pointed to the stands, and there’s Richard, this six-foot-nine giant sitting up there,” said Titley. She also elaborated that her NHL-playing brother is 6’7”.

Honestly couldn’t be happier to finally announce my partnership with the asics family????

She’s a Fan of Drake

She may be an inspiration for many young girls in her country, but at the heart of it all, Oleksiak is like any other 17-year-old. And like any teen in Canada, she is a fan of one of the best musicians to come from the country: Drake. That’s why Oleksiak was over the moon when her idol noticed her!

Drake and Oleksiak not only follow each other on Twitter, but Drizzy also gave her a shoutout on Instagram for her magnificent performance at the Olympics! And when she couldn’t return from Rio fast enough to get a ticket to Drake’s concert, the rapper reportedly made sure she didn’t miss his show. When asked what’s better between winning gold or a shoutout from Drake, she couldn’t decide.

OVOPenny aka @typicalpen we are so proud of you!!!! Can’t wait to see you when you are back from Rio at a show!

Even Coach Titley took to listening to Drake and Chance the Rapper or “music stuff,” as he called it, in order to connect with the young swimmers under his charge. But it wasn’t so easy for the coach to get in the groove! He said, “But I had to get down with it, or whatever. I’ll just stand there and bob my head. And they’ll find it funny that I’m into it. I don’t care, but they do.” The coach, however, fears that Oleksiak’s rising stardom might affect her ability to bring home medals for the next three Olympics, while her parents are afraid she might miss out on a normal life if she became too obsessed with training.

Denis Shapovalov, an Israel native of Russian lineage, settled in Canada with his family when he was a baby. He began playing tennis at the age of five, and at 18, he competed against his idol and top seed, Rafael Nadal at the Rogers Cup and won. His suspected girlfriend was there to cheer him during the Rogers Cup in Montreal, as well.

Penny Oleksiak tweeted a picture to prove she met Shapovalov sometime during the Rogers Cup and it looks like they sparred a little on the court. Obviously, the second-youngest player to defeat Nadal was a bit too much for the Olympics medallist. She tweeted that she’s never playing again.

What about Shapovalov jumping in the pool then? The tennis pro replied to her tweet, saying that he mastered the doggy paddle technique. It’s safe to say these two aren’t switching sports anytime soon!

One of the first, and definitely the last time I will be holding a racket #thanksbutnothanks #RogersCup2017 pic.twitter.com/OSIuSg94Aw