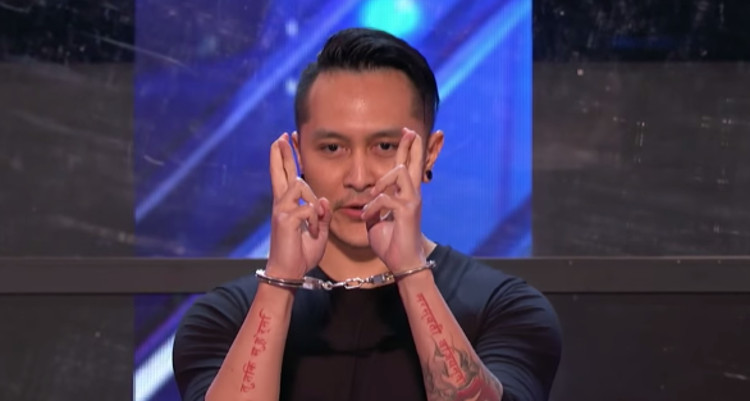 Escape artist, Demian Aditya made everyone nervous last night on America’s Got Talent! Howie Mandel, in particular, was astounded after seeing the act. Aditya did the impossible —or so it seemed— when he was almost buried alive. The illusionist is breaking barriers as a magician and makes sure to play on the fear factor. Take a look at what Demian Aditya did on AGT that gave even the bravest people goosebumps.

If you missed last night’s episode of America’s Got Talent, then you need to catch up! The judges and entire audience saw something that was so nerve-racking they were nearly out of breath after the performance ended. Demian Aditya, the master illusionist and escape artist from Indonesia, stunned everyone when he escaped death on the TV show. Here’s more information about Demian Aditya on AGT as well as his wife. So if you want to learn more about his personal life, read on to know everything about the America’s Got Talent’s magician in our Demian Aditya wiki.

Abracadabra from the Beginning

Born as Aditya Pambudhi in Jakarta, Indonesia on June 19, 1980, Demian Aditya’s age is 36. The magician has been at it since he was 10 years old after teaching himself magic and slight of hand. He knew he had talent after winning both the Mr. Congeniality and Favourite awards after entering the Abang & None Jakarta Kepulauan Seribu in 2002. His first TV debut was in 2007 with his show Demian Sang Illusionist (Demian the Illusionist) for two years, before hosting another TV show called House of Demian. In April 2010, Aditya was also featured in the show Gara-Gara Magic (Because of Magic), which boosted his fame in Indonesia, and made him want to shift to prime-time TV. He often performs for big events like Award Ceremonies and channel anniversaries.

Sara Wijayanto is an Indonesia-born singer and actor born on May 6, 1979, in Jakarta. She began her career when she met two members of the band Slank while singing in Gang Potlot. Wijayanto went on to sing in the band, later working on solo tracks like “Never Gonna Stop, Never Gonna Stop” and “You” feat. Urban Vibe, which she dedicated to her husband. She also starred in horror movies like Doll and Doll 2 (which will soon be released in Indonesia). The couple got married on May 22, 2014, in South Jakarta. Wijayanto is seen in most of Aditya’s performances and sometimes his helpful pawn.

Demian Aditya on America’s Got Talent

Aditya surprised the audience the second he got on stage. He made things even more intriguing after revealing that he could die if things went wrong —which was a definite possibility considering he only practiced once before! During his audition, Aditya was restrained with handcuffs and metal bars and put inside a glass box that would drop 900-lbs of sand on him within two minutes if he could not get out.

This was not all the illusionist did! Things were looking bad as Aditya worked on his neck restraint. Before the audience knew what was going on, the sand fell, and the magician could not be seen. While the audience was left speechless, Howie Mandel managed to ask, “Is that a problem?” before two men rushed on stage, one with a hammer, and broke the glass in an attempt to free Aditya. What made the trick so amazing? The man with the hammer turned out to be none other than Demian Aditya.

Aditya is an amazing magician and an even better showman. He knows how to captivate his audience and has found success in misleading them. The TV star has a pretty impressive Instagram page as well, with posts of his shows and upcoming acts, as well as snippets of some magic tricks, he’s worth a follow! Here’s a look at some of his whimsical Instagram posts.

So, if you are a fan of magic, Demian Aditya is one to watch out for. The illusionist is currently performing on America’s Got Talent season 12 that airs Tuesdays at 8:00 p.m. EST on NBC.