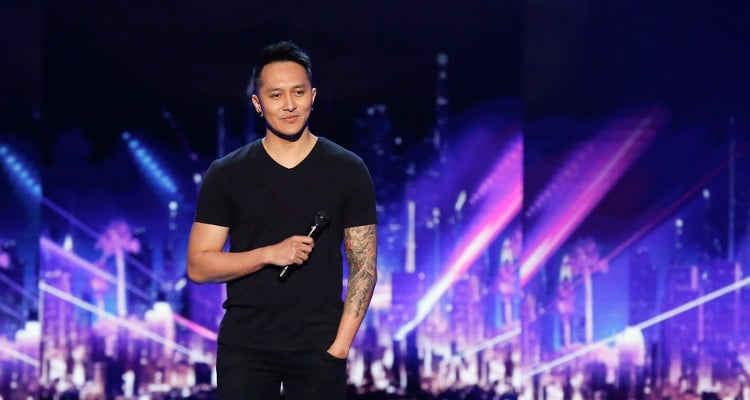 America’s Got Talent has had its fair share of terrifying and mind blowing acts. This year, escape artist Demian Aditya is bringing the horror to the show. Adding to the tension of his act is his very terrified wife.

Every time Demian Aditya comes on stage, it’s always a good thing to glance at the wings where his wife is biting her nails. Demian Aditya’s wife, Sara Wijayanto, is more than just a good looking show-stealer. Aditya likes to play with fear in his illusions and his wife certainly adds to it. She’s never sure if her husband will come out of his acts alive and well. Her screaming certainly gets our attention! Find out more about this illusionist’s wife, who has to put up with his death-defying craziness, in Sara Wijayanto’s wiki.

So is Aditya, in case anyone was curious. The couple traveled from Indonesia, where they live, so Aditya can compete in AGT. Wijayanto was born in Jakarta in 1979, which makes her age 38. Aditya, born in Central Java, is 37 years old.

Aditya, a self-taught illusionist, has performed in his own shows and events in Indonesia. Wijayanto is not just someone who watches her husband from the sidelines; she’s a celebrity too.

She Started as a Singer

Sara Wijayanto grew up in a musically-inclined family. She began singing at the age of four, but didn’t consider a career in it until 2007 when a friend suggested she take it up full time. She collaborated with that friend, Andrey Chilling, and Mori Vebrani to record a song. She nearly gave up when Chilling and Vebrani passed away in 2009, but made a musical comeback.

She got her big break performing the Indonesian tourist hub of Gang Potlot. The place is associated with the music group, Slank who have a big Indonesian fan following. There, she met two members of the group, vocalist Kaka, and drummer, Bimbim.

Wijayanto lent her vocals to Slank’s album which was recorded in a bathroom that was converted into a studio. She sang in their song, “You Have to Go Home Fast” and toured with the group. Her popularity grew and she went on tour with Indonesian artists like Oppie Andaresta, and Imanez.

The AGT contestant’s wife went on to pursue a solo music career. She penned her own songs like “Never Gonna Stop” and its various versions. Wijayanto wrote and sang the Indonesian song “In the Heart Forever and You” which was dedicated to her husband, Aditya. She also formed the music duo, Rokenrol with the singer, Melanie Subono.

She appeared in TV shows and even co-hosted games shows. But it was her stint hosting a horror-themed show that has made her Indonesia’s resident “Scream Queen.” She acted in a few horror movies and her most recent work, The Doll 2 will hit Indonesian theaters on July 20. Just her Instagram posts about the movie are giving us Annabelle feels!

Also Read: Johnny Manuel on “America’s Got Talent:” Singing Whitney Houston’s, “I Have Nothing.”

Wijayanto wrote about her songs and inspirations in her book, Risara. Her sister, Adinia Wirasti, is also an actress. She graduated from the New York Film Academy.

Sara Wijayanto and Demian Aditya got married in 2014 in South Jakarta and they show each other love on social media. Until two years before he married Sara, Demian was married to another actress, Yulia Rachman.

Rachman is a famous model and TV actress in Indonesia and has children from her previous relationships. They have a son, Kiandra Aldya Arka together. In 2012, the couple filed for divorce and a few months after it was finalized, Rachman made a shocking revelation. She said she contemplated suicide when she found out Demian was having an affair with Sara when they were married.

Two years after his divorce, Demian married Sara. These days, we see a terrorized Sara being comforted by Tyra Banks on AGT while Demian does his death-defying tricks.