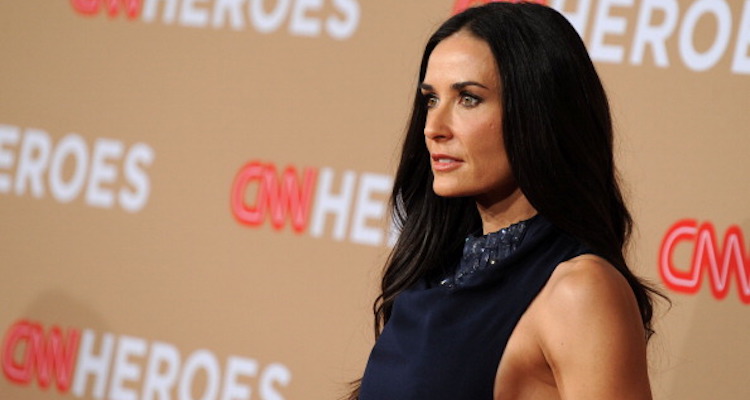 To say that Demi Moore has had a very hard and topsy-turvy life would be an extreme understatement. From a slew of failed marriages dating back to her youth in the early 80s; to being estranged from her drug addicted and alcoholic mother for a number of years; to dealing with her own addictions and mental demons that caused her own children to temporarily sever ties with her; right down to her box office and critical successes and flops in Hollywood, Demi Moore has certainly been dealt her fair share of hardships. Even though she’s always been a tabloid and red carpet fixture to some extent, her presence on the big and small screens in recent years has substantially dwindled, leading many of her fans to wonder what Demi Moore is doing now and what her plans are for the remainder of 2017.

Unfortunately, the Ghost (1990) actress doesn’t seem to be very active on social media. Though her last tweet was in June 2017, the one before that was September 2016. Thanks to her daughter’s account, we know that Demi Moore is active on Instagram, but it’s not only private, but also doesn’t have that blue checkmark of authenticity. There are still plenty of fan accounts that give us a glimpse into the actress’ life. Including this one of her then-husband, Ashton Kutcher.

However, there’s plenty of proof that Demi Moore is still as gorgeous as ever at age 54 as she ever was! Here’s another pic of Demi Moore when she was just 28 years old, proving that she could rock even the shortest hair styles!

From a young age, it seemed like things started off on a negative note for Demi Moore. Her biological father divorced her mother after just two months of marriage and right before baby Demi was three months old. A few months later, her mother met and married another man, whom Demi believed to be her father until she was about 13 years old, when she came across their marriage certificate and discovered that the dates didn’t add up. After asking them a few questions, her parents finally came clean and told her the truth. On top of that, her family was always moving around because her stepfather worked as a newspaper advertising agent and could never hold down a job. So, Demi never really had the opportunity to plant her roots in one place when she was a kid, making her an instant outcast pretty much everywhere they went. By the age of 16, Demi dropped out of high school to pursue her acting and modeling career.

In 1980 when Demi was just 18 years old, her stepfather committed suicide two years after separating from her mother.

The Beginning of an Illustrious Career

By that point, Demi had already moved out of her mother’s house in West Hollywood and signed on with Elite Modeling Agency. They took her to Paris, where she began her career working as a pin-up girl for various men’s magazines. The jobs were no doubt a little sketchy —given the fact that she had to lie about her age because she was technically only 17 when she started doing risqué photoshoots. It was her next door neighbour in Paris, actress Nastassjia Kinski, who inspired her to make the transition into acting and enroll in classes. Ultimately, this was a very smart and appropriate career move for the young beauty because she would go on to star in some of the most memorable and beloved movies of the ’80s including St. Elmo’s Fire (1985) and About Last Night… (1986). Although these films were largely commercial successes and blockbuster hits, her appearances in them lead people to affiliate her with the Brat Pack, much to her chagrin. Demi wanted very badly to dissociate herself from that ensemble and took on more adult and hard-hitting roles as the years wore on.

Over the years, she’s taken several breaks from acting and being in the spotlight due to personal and health problems, but arguably her biggest success to date has got to be the movie Ghost in which she stars alongside the late Patrick Swayze. That scene with the two of them making pottery before making love is one of the most iconic scenes in cinematic history, and everyone knows the song Unchained Melody by the Righteous Brothers because of it!

Since Demi Moore seems to be mostly MIA these days, her fans have definitely been wondering whether she’s in a relationship and who she could possibly be married to now. Demi’s been married three times in the past and none of them have worked out for one reason or another, so it’s possible she’s just done with the whole idea of ever getting married again. From 1980-1985, she was married to rocker Freddy Moore and even co-wrote the song It’s Not A Rumour (1980) with him for which she still receives royalties. Two years later, she married Bruce Willis and their marriage lasted from 1987 until 2000. They have three daughters together: Rumer Willis, 28, Scout LaRue Willis, 25, and Tallulah Belle Willis, 23. Her last marriage was to Ashton Kutcher, who is 16 years her junior.

It certainly seems like Demi has an affinity for younger men as it was rumoured in 2014 that she was spotted heavily flirting back and forth with then 23-year-old Magic Mike (2012) actor, Alex Pettyfer. The two were seen partying it up in an L.A. nightclub and sources said there was quite a bit of heavy petting going on. Who can blame her when he looks like this?

After a long hiatus from acting, Demi Moore has returned to the big screen this year in the black comedy starring Scarlett Johansson, Rough Night. The movie was released on June 16, 2017 and has received mixed reviews on Rotten Tomatoes, but it’s exciting to see that Demi Moore is working again. Lately, the actress has suffered a great deal of stress and even lost her two front teeth from grinding them so hard in her sleep due to a condition called bruxism. Luckily, she was able to get them fixed before appearing on The Late Show Starring Jimmy Fallon on June 12, 2017! Here’s wishing her all the best in the future!