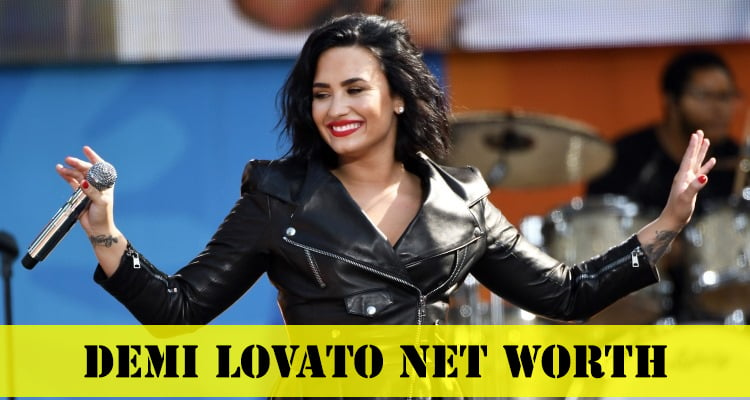 Demi Lovato has had a pretty dramatic career rife with ups and downs on the personal front. She is one of the best-selling singer-songwriters of the generation, but her entertainment career began when she became a child actress on the Disney Channel. Thanks to her immense talent, Demi Lovato’s net worth in 2018 is estimated at $33.0 million.

Singer-songwriter Demi Lovato is currently in the middle of her Tell Me You Love Me World Tour. However, the tour has hit a roadblock with her hospitalization.

The 25-year-old is reportedly fine and awake. Although the cause of Lovato’s medical scare is not known, it is speculated to be a drug overdose.

Her entertainment career is stricken with drug addiction struggles and other issues. She had previously taken a hiatus from the limelight to focus on her recovery, which has impacted her net worth.

Demetria Devonne Lovato was born to a former Dallas Cowboys cheerleader, Dianna De La Garza, and musician Patrick Lovato. A young Lovato got her start in showbiz by securing a role on Barney & Friends in 2002.

Her stint on the show ended in 2004, but Lovato was already on the path to stardom. She learned the piano and guitar, and she took dance and acting lessons as a child.

Being bullied in school led her to continue her studies through homeschooling. She pursued her acting career simultaneously, appearing on Prison Break, Grey’s Anatomy, and Just Jordan.

She’s One of the Most Famous Disney Stars

Demi Lovato, Miley Cyrus, Selena Gomez, and the Jonas Brothers are part of one of the most famous generations of Disney stars. Lovato’s Disney career jumpstarted in 2007 with the Disney Channel short series, As the Bell Rings.

She passed the auditions to land simultaneous breakout roles in the DCOM flick, Camp Rock, alongside the Jonas Brothers and comedy series Sonny with a Chance. She sang on the Camp Rock soundtrack and its sequel, launching her music career.

The curse of early fame struck Lovato who quit Sonny with a Chance and took a break from her entertainment career to focus on her recovery. She was dealing with depression, bulimia, and self-harm stemming from being bullied in her youth. She was diagnosed with bipolar disorder and went to rehab to fight cocaine addiction.

Lovato’s Disney success set the foundation of her music career. She embarked on the Demi Live! Warm Up Tour in support of her debut album, Don’t Forget.

The album debuted at No. 2 on the Billboard 200 and certified gold by the RIAA for selling over 500,000 copies.

Lovato has sold over 2.4 million copies of her albums in her career. She has over 20.8 million digital sales to her name.

She topped it with appearances in the Jonas Brothers’ Burnin’ Up Tour and Jonas Brother Live in Concert Tour World Tour 2010.

The Demi Lovato: Live in Concert Tour of 2009 and 2014’s Neon Lights Tour both crossed $7.0 million each in estimated earnings. Her current Tell Me You Love Me World Tour has raked in $20.0 million in sales in 2018.
Lovato released more critically lauded albums in her career and has seven top 20 entries in the Billboard Hot 100 with songs like “Sorry Not Sorry,” “Heart Attack,” and “Here We Go Again.”

She Made a Comeback with The X Factor

After promising to return to the limelight when she felt confident enough, Lovato staged the comeback of a lifetime. She mentored aspiring musical talent on The X Factor US. By then, she had become a role model for her young fans for speaking out about social causes she has experienced.

The singer-songwriter was reportedly paid $1.0 million for her first season on The X Factor. She doubled that salary the following season and was the highest paid judge on that season’s panel. Demi Lovato’s salary hike made her the youngest and highest-paid woman on the show.

She continued to release new music and had a recurring role on Glee. Lovato has sung on hit soundtracks, including a pop version of “Let It Go” for Frozen.

Lovato joined Seventeen magazine as a contributing editor and wrote pieces on her personal struggles. She released an eBook, Demi, in 2013 on iBooks.

Her 2013 book, Staying Strong: 365 Days a Year, topped The New York Times Bestseller List. It was part of a multi-book deal with Feiwel and Friends. She is also working on a memoir as part of the deal.

Recently, Lovato’s mom released her own memoir, Falling with Wings: A Mother’s Story (2018) about her abusive marriage with Lovato’s father.

She Is a Businesswoman

Lovato became a young entrepreneur in 2014 with the launch of her own skincare line, Devonne by Demi. But being an inspiring role model for young people makes her a sought-after brand ambassador.

She’s currently the face of Kate Hudson’s brand, Fabletics, which carries the starlet’s collection of athleisure wear. Lovato reportedly earns around $250,000 every time she’s models in Fabletics on Instagram.

Fabletics announced it’s sticking by Lovato in the wake of her recent hospitalization.

Aside from Fabletics, she also inked an endorsement deal with CORE Hydration in 2018.

Lovato endorses the temperature-controlled mugs by Embers where she invested millions. The company that started out with a crowdfunding campaign received around $24.0 million in investments reportedly from Lovato and Drew Taggart of The Chainsmokers.

Lovato’s $8.3 million home in Los Angeles was tagged as unsafe for living when a landslide sent debris to her doorstep. Not that the singer had anything to worry about as she could move into any of her other properties.

At only 16 years of age, Lovato had bought a new home worth $1.8 million in Toluca Lake. The neighborhood housed fellow Disney alums Vanessa Hudgens and Ashley Tisdale. She listed the Mediterranean villa for sale at $2.25 million in 2014.

Lovato was found unconscious at her Hollywood Hills home on Tuesday (July 24) afternoon. She was rushed to the hospital where she’s awake, according to a statement by her family.

It is suspected that Demi Lovato overdosed on drugs. However, the family denied those claims.