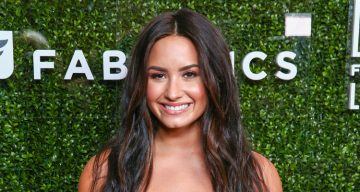 Singer Demi Lovato will soon be celebrating her birthday on August 20! The “Heart Attack” singer will be turning 25 and since her birthday is just two weeks away, we have assembled five of Demi Lovato’s hot pics. Take a look at them.

Who does not know the brilliant singer Demi Lovato, who made her debut in the Hollywood industry as a child actor? She first appeared as a child star in Barney & Friends. But it was in 2008 that Lovato earned fame, when she appeared in Disney channel’s TV film Camp Rock and also released her debut single “This Is Me,” which received positive feedback from listeners.

Lovato was born on August 20, 1992 in Albuquerque, New Mexico to Patrick Martin Lovato and Dianna De La Garza. Her father was a musician and her mother was a former Dallas Cowboys cheerleader. Now we know where Lovato gets her musical talent from! Her parents got divorced when Lovato was really small. At a very young age, Lovato was drawn towards music, and at the age of seven, Lovato started playing piano. By the age of ten, she got the hang of guitar. Simultaneously, she also went for acting and dancing classes.

On Monday in an interview, Lovato opened up about her battle with bipolar disorder saying, “It’s something that I have, it’s not who I am.” The singer further added, “I think when people refer to me as being bipolar, it’s something that’s true – I am bipolar – but I don’t like people to use it as a label. …I think it’s very important that people raise the importance of mental health because it’s something that’s so taboo to talk about.”

Besides earning a name for herself in the music industry, Lovato has also appeared in several TV shows such as Barney & Friends, As the Bell Rings, Sonny with a Chance, The X Factor, Glee, and We Day. Throughout her music career, Lovato has released a total of five albums. Her debut album, Don’t Forget was released in 2008, followed by Here We Go Again in 2009, Unbroken in 2011, Demi in 2013 and Confident in 2015. Throughout her career, Lovato has earned a lot of awards such as MTV Music Video Award, 13 Teen Choice Awards, five People’s Choice Awards and also a Latin American Music Award.

Lovato is a brilliant singer and has a huge fan following throughout the world. If you have been looking for Demi Lovato’s sexy pics, then keep on reading. We’ve found some of the hottest shots from Demi Lovato’s Instagram account!

Objects in this picture may seem bigger than they actually are……

5. Bringing the One-Piece Back in Sexy Style!