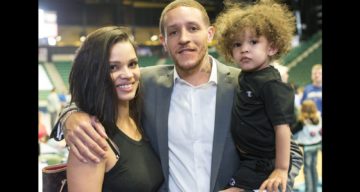 Delonte West with his wife Caressa and son Cash pose for a photo at the Dr. Pepper Arena on April 1, 2015 in Frisco, Texas. (Photo by Michael Mulvey for The Washington Post via Getty Images)

Videos of former NBA talent Delonte West during and after an alleged altercation have raised concerns for his mental health. His fans and other athletes are rallying for more support to get West the help he obviously needs. But his condition also begs the question, where is his wife? According to reports, West’s current wife is Caressa Madden. His marriage to his first wife, Kimberly Awad, ended very early into his career, when his mental illness struggles were brought to the fore. West’s relationship history is connected to his public struggles with his mental health, and Celtics fans are curious about his current and ex-wives.

Delonte West began his professional basketball career with the Boston Celtics in 2004. Towards the end of his first term with them, his personal life and mental health struggles started to unravel in the public eye.

During his Celtic days, West was in a relationship with one Caryn Taylor, who was his live-in girlfriend. However, things turned ugly in 2007 when West attempted to break up with her.

Taylor lashed out at West, reportedly trying to choke him and also shoving his sister. She also tried to slash her wrists with shards of glass, according to police records.

Taylor was charged with domestic assault and battery at that time. But the extent of the attack was only made public when she skipped her court hearing.

West Divorced His First Wife, Kimberly Awad, in a Month

The then-Cavaliers player moved on from the Caryn Taylor debacle very soon, with Kimberly Ashley Awad. They ended up tying the knot in the 2009 off-season.

“They’ve been together on and off over the last four years,” Dmitri said. “She’s a nice girl from an upscale family in New Jersey.”

Kimberly and Delonte eloped and married in Nevada in July 2009, according to Clark County records. Not long before that, he was diagnosed with bipolar disorder in 2008 after a pre-season Cavaliers game. 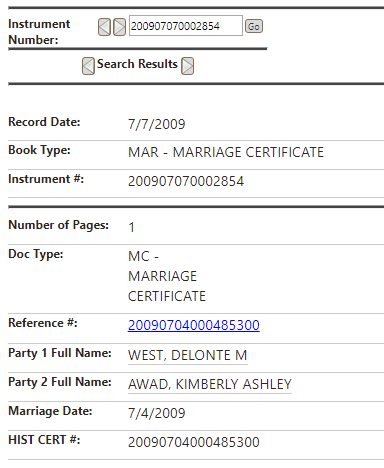 Delonte later disputed the diagnosis and had a breakdown on court. In 2009, he was also arrested on weapons charges.

His mental state was believed to have worsened amid the breakdown of his marriage to Awad and the pressures of his public life. West and Awad reportedly separated a few weeks after their wedding and ended up finalizing their divorce in 2010.

According to her Facebook, Awad is doing pretty well for herself. She is currently based in New York, where she works as a director of business development at Condé Nast. There’s no indication of any current relationship or any contact with West.

West’s legal troubles saw him with very little play time in the NBA. Additionally, the NBA Lockout of 2011 took a toll on him, and he reportedly worked odd jobs to earn money.

Then with Dallas Mavericks, West met Caressa Suzette Madden (born May 13, 1988) at a mutual friend’s home. They not only hit it off, she quickly moved from Dallas to West’s mansion by the Potomac River in Fort Washington.

West hoped to wait out his NBA unemployment with Madden at their home. But his financial situation continued to worsen such that when winter came, he couldn’t afford additional heating for the house.

Madden was pregnant with their first child back then. To help her get through the harsh cold, West filled the house with multiple portable space heaters and heated water on the stove to make a warm bath for the pregnant Caressa.

As the legend goes, West proposed to his pregnant girlfriend with a piece of string from a jump rope he found. “It’s all I can afford, baby,” he punctuated the proposal. “I’m broke, heat ain’t working, brain ain’t working right, but I love you.”

They reportedly got married in 2013 and pictures that surfaced of their low-key wedding show that she was pregnant at that time. Madden gave birth to their son, Cash West, shortly after their wedding. According to some reports, she and West have a second child, too.

Delonte West’s disturbing video has many questioning whose care the former athlete is in. Some reports state that he’s currently living with his mother in Maryland and working with his brother, Dmitri Jr.

While Madden’s current whereabouts can’t be confirmed, it’s believed that she’s still married to West. There is speculation that she is back in Dallas with their children.