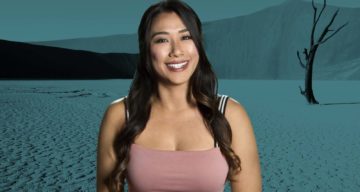 Dee Nguyen went from a popular contender on MTV’s The Challenge to the subject of social media’s ire in a day. The Geordie Shore breakout star posted insensitive comments about Black Lives Matter and George Floyd, which led to her getting fired from The Challenge: Total Madness. Nguyen is especially being slammed for making those comments as a POC herself. Our Dee Nguyen wiki explains this reality starlet’s background in detail.

Dee Nguyen Is the Daughter of a Vietnamese Immigrant

Dee Nguyen, born on February 28, 1993, hails from Australia. She was raised in Sydney by her mother who immigrated from Vietnam. During one of her many reality TV appearances, Nguyen said that she had a tough upbringing, as her mother struggled hard to work and raise her.

We’ve been celebrating my birthday all week but it’s officially my birthday weekend in Vegas! Feel so blessed to not be stressed about being 27 🎉💖🎊 #vegas #birthday #piscesseason

Her mother is from a large family with many siblings in Vietnam. She sold cigarettes on the street and saved enough money to leave her home country. But Nguyen’s mom had to pull off a stealthy escape at night owing to the conflict-ridden environment in Vietnam back then.

The reality starlet’s mother arrived in Hong Kong without papers, for which she was arrested. Dee Nguyen’s father, also a Vietnamese refugee who escaped to Hong Kong two years before her mother, married her to keep her out of jail.

Dee Nguyen was born in Hong Kong, where she was raised until she was four year old. Done with her father, who Nguyen described as a “POS,” the mother and daughter left him and moved to Australia.

They had it tough living in a tiny apartment until Dee was 12. But their lives improved when her mother married again.

Don’t Miss: Facts about Brad Fiorenza From The Challenge: Vendettas

Nguyen broke onto the reality TV scene through the British MTV reality show, Geordie Shore. The series moves from Newcastle to Australia for season 17 in 2018 and Nguyen was one of the four Aussies in the cast. The reality debutante made a splash right away by revealing some sides to her that are unknown even to her mother.

Nguyen introduced herself on the show as a “pole dancer” from Sydney. Pole-dancing is the secret to her toned bod, and she continues to post some cool moves and techniques on social media.

Nguyen went from Geordie Shore to The Challenge, debuting in War of the Worlds.

She recently moved to Kansas City, Missouri, near her cast mate and friend, Wes Bergmann, and his family while she continued to appear on The Challenge for two more seasons.

Nguyen feels that she’s lived a double life as a dancer-turned-reality star. She confessed that her mother has no idea what she’s been doing.

Her mother doesn’t know English and doesn’t check the Internet. So Dee is sure she’d never find out about her antics on a reality TV show.

“If she knew even half the stuff I get up to, she’ll probably disown me.”

Also Read: Everything You Need to Know about Cara Maria, Paulie Calafiore’s Girlfriend

Nguyen Was Fired from The Challenge for Her BLM Comments

Since moving to the U.S., Dee Nguyen’s reality career has been on an upward trajectory. She parlayed her reality fame into social media endorsements, earning between $300.00 and $500.00 per sponsored post on Instagram.

And she also won the cash prize on her second The Challenge stint. After War of the Worlds 2, Dee returned for the latest installment, Total Madness, as a reigning champion.

Nguyen, who has 11 wins to her name, got herself fired from the current season for her insensitive comments on social media regarding the Black Lives Matter movement and the ongoing fight for justice for George Floyd.

Nguyen had posted pictures of herself despite declaring her participation in #blackouttuesday. She was criticized for not following through with her words, though she pledged to support the BLM movement.

In since-deleted tweets, Nguyen wrote “Idk why some of u think I’m anti BLM. I’ve been saying that since the day I lost my virginity.” [sic] She also commented on an Instagram post about Floyd, writing that “people die every f*****g day.”

Bayleigh Dayton, Nguyen’s The Challenge co-star, and her husband brought attention to Nguyen’s tweets and accused her of using BLM for “clout.” As a result of her tweets, MTV fired her from The Challenge, which will continue without her.

Nguyen followed her comments up with an apology on her social profiles. She stated that she will be taking time off from work.

Don’t Miss: Amanda Cerny Wiki: Her Boyfriend and Other Facts about the Internet Sensation