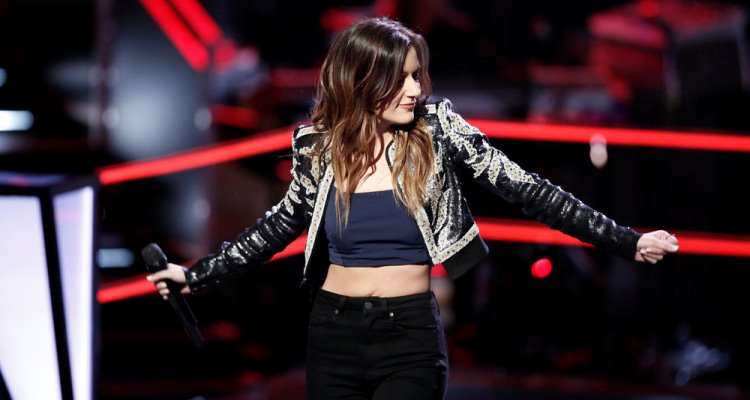 Each week The Voice contestants get better and better, leaving fans in shock and awe. Some are still recovering form the series of knockouts that are just wrapping up, and we don’t blame them! If you want to find out all the best ways to keep tabs on the talented Voice contestant, then scroll down for all you need to know about Davina Leone’s social media accounts!

Davina Leone‘s Instagram username is “davina_leone” and she has 14k followers! We can’t say we’re surprised, having witnessed her vocal talents each week. The former Team Gwen member blew us away with her cover of Sia’s hit song “Cheap Thrills,” but after she lost her battle against Brandon Royal, she was instantly stolen and joined Team Adam. Fans can stay updated on everything Leone is doing (a lot of it is enjoying the California sun), so feel free to follow her. There are also videos of the up-and-coming singer giving her fans a behind-the-scenes look of what she does best.

Davina Leone’s Twitter username is “@davinaleone” and you can stay in touch with the 24-year-old in real time, from anywhere. The award-winning YouTube star used music as an outlet for the years of bullying that she went through, and now she she’s surrounded by people that support her each week. If you’re lucky, she might follow you back!

Davina Leone’s Facebook username is “davinaleonemusic,” where fans can follow her journey on The Voice and stay updated on whatever she’s doing on and off the show. With all of these social media contacts, there’s no excuse for not following Leone as she gives it her all into every song she sings!

Davina Leone’s Snapchat username is “davina leone” and whether you’re using the app or not, you will be notified of what she’s up to next. Whether she’s taking notes from John Legend and Adam Levine or enjoy the sun, fans get to see first hand what the rising star is doing. The show is only getting better with each episode and fans are starting to see their favorite singers either advance or get eliminated. Unfortunately, they can’t all be winners as there can only be one and we have a feeling team Adam would like to beat Team Blake this season!

We wish Leone all the best and don’t forget to watch The Voice on Mondays and Tuesdays at 8:00 p.m. EST on NBC!