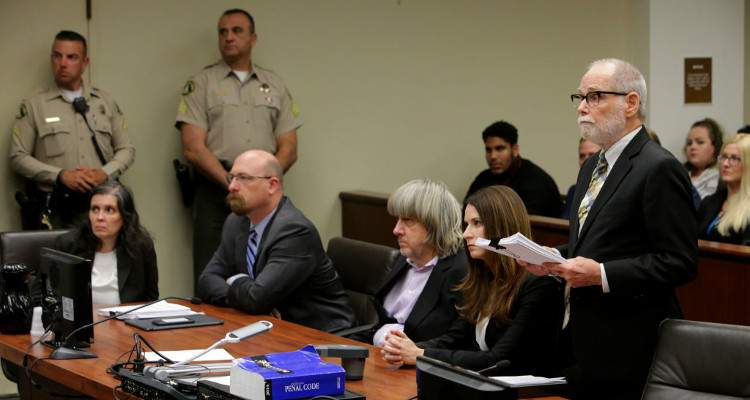 David Turpin, age 56, and his wife, Louise Turpin, age 49, were recently charged with multiple felony counts of torture and child abuse. The Riverdale County couple are known to have held their children captive in a dilapidated and foul-smelling home for years. Owing to continuous emotional and physical abuse, the Turpin children showed signs of trauma and severe malnourishment. They are currently being treated at different medical centers in the area. We have more about David Turpin’s family below.

The Turpins’ Tale of Torture

It’s almost impossible to believe that parents could be the ones to cause any level of harm to their own kids. But, as reported, David Turpin’s children were not only hurt but were also faced with severe mental and physical agony for years.

While a series of photos revealed the Turpins as a happy family, they were far from it. David Turpin and Louise Turpin are currently facing multiple charges at the California District Court.

Their dark and outright terrible secrets were revealed last Sunday, when one of their daughters managed to break out of their Perris home through a window.

After carefully planning her escape for two long years, the 17-year-old fled and immediately called 911 from an un-serviced cell phone. Investigators then reached the Turpin residence to discover the shocking circumstances in which they lived.

Officers entered the home to find three children shackled to their beds. The state of the residence was also revealed to be extremely “filthy” and “foul-smelling.”

David Turpin and Louise Turpin were immediately arrested and are currently facing the below charges:

How David and Louise Turpin Abused Their Children over the Years

The couple reportedly held their children hostage and repeatedly beat them, often chaining them to pieces of furniture.

As per circumstantial evidence and recorded statements, David Turpin’s children were not allowed to play with toys or meet relatives. They were only provided with one meal each day, although the couple often had food, like pies, for themselves. The children were only permitted to write in journals, hundreds of which are reportedly being read for evidence.

Each of the 13 siblings could shower only once a year and were accused of “playing with water” if they washed their hands above the wrists. The Turpin kids also lacked knowledge of basic life terms and were reportedly unaware of what police officers were.

Aged between two and 29, they confessed that the abuse started while they were living in Texas, and continued when they moved to their home in California.

Neighbors stated that they seldom saw the Turpins playing outside. On one occasion, a neighbor revealed that they “froze” when she and her son complimented their Christmas decorations.

Louise Turpin’s sister, Elizabeth Flores made shocking revelations about her sister and her troubled childhood, adding that she was also not allowed to enter their home

Though the majority of the children were home-schooled, one was said to be attending a public college. He was reportedly dropped off and picked up by his mother, who waited outside of his classroom until he was done.

What’s Next for the Turpin Children

While Louise and David Turpin’s kids show no signs of irrecoverable damage, they are victims of trauma and abuse, and are severely malnourished. The 29-year old weighs a shocking 82 lbs, while the 17-year-old is said to resemble a 10-year-old.

The six children are currently undergoing medical treatment at the Riverside University Health System Medical Center in Moreno Valley, while the adults are in Corona Regional Medical Center, in Corona, California.

The Riverside County Department of Public Social Services is seeking court authorization to provide oversight and care for the 13 siblings. In the meantime, David and Louise Turpin are being held on a $12.0 million bail until their next hearing. If convicted, they can each face a maximum sentence of 94 years to life in prison.