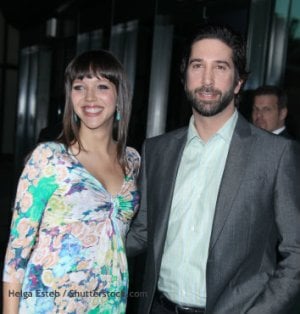 You probably know David Schwimmer better as Dr. Ross Geller from the TV sitcom Friends. The actor landed the role at the start of the series in 1994 and held on to it till the final episode in 2004. Friends—which also starred Courteney Cox, Jennifer Aniston, Lisa Kudrow, Matt LeBlanc, and Matthew Perry—was a huge success, earning 63 Emmy nominations among a slew of other awards. The ratings were a hit from start to finish and the show was named one of the 50 greatest TV shows of all time by TV Guide.

If you’ve ever followed Friends, it’s probably hard for you to imagine Schwimmer being with any woman but “Rachel” (Aniston’s character on the show)—the on-again-off-again relationship between Ross and Rachel was arguably the underpinning of the series. But in real life, Schwimmer is happily married to Zoe Buckman.

Schwimmer and Buckman, a part-time photographer, first met in 2007 while he was in London directing the movie Run Fatboy Run—she was working as a waitress at a restaurant he visited. They started dating shortly after, and Buckman reportedly moved from London to L.A. just to be with him. While Schwimmer had been with younger women before, the gap had never been as large as 18 years. When they tied the knot in 2010, Buckman was 25 and Schwimmer was 43.

The celebrity couple welcomed their first child, a baby girl named Cleo, in May 2011. Schwimmer has said that becoming a family man saved him from letting the celebrity status take over his life, admitting that at one point—before he met Buckman—he did get too caught up with being famous. “During those years there were times when it came to women and dating when I let celebrity get the better of me and I lost respect for myself,” he told Seven Magazine, adding, “Having a child has added a whole new dimension to my life.”