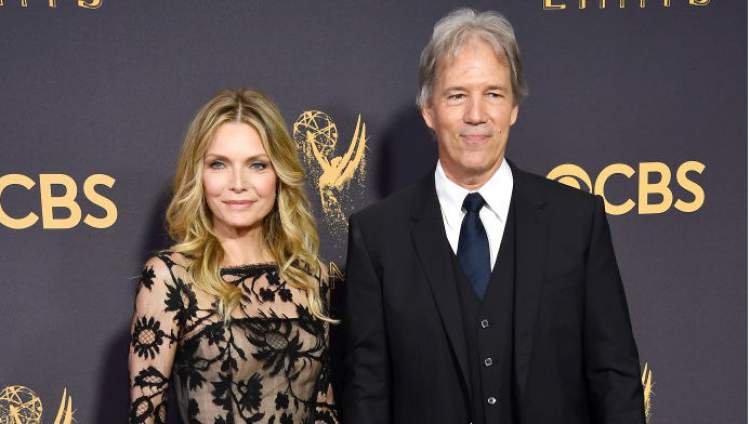 Who is Michelle Pfeiffer’s husband? He’s been in the entertainment business forever but many are curious to know more, now that his wife is making her career comeback in a big way. For more on her husband, have a look at our David Kelley wiki.

Who is David E. Kelley?

David E. Kelley’s age is 61 and he was born David Edward Kelley on April 4, 1956, in Waterville, Maine. He’s a TV producer and writer who has been behind shows such as Boston Legal, Ally McBeal, Harry’s Law, and Big Little Lies. David Kelley’s net worth is estimated at $250.0 million.

Michelle Pfeiffer and David Kelley were married in November 1993 (this month is their 24th anniversary) and have two children: Pfeiffer’s adoptive daughter Claudia Rose, 24, and their son John Henry, 23. The 59-year-old actress was also previously married to Peter Horton from 1981-1988.

While many remember Pfeiffer from roles in Grease 2, Scarface, and Batman Returns, she wasn’t very active sometime in the mid 2000s and reflected that she was “unhireable” for a while. Now, with roles like Wizard of Lies, mother!, Ant-Man and the Wasp, and Murder on the Orient Express under her belt, she’s back due to a scheduling accident.

Any acting breaks in her career were due to wanting to be close to her family but now she has an empty nest, telling Interview, “I’m an empty nester now. I’ve never lost my love for acting. I feel really at home on the movie set. I’m a more balanced person, honestly, when I’m working. But I was pretty careful about where I shot, how long I was away, whether or not it worked out with the kids’ schedule.”

His Views on Amazon Exits

Amazon has gone through many changes due to the recent scandals/allegations and the executive turnover is hard to miss.

“It can only be good for Amazon. It was not well-run,” Kelley told The Hollywood Reporter before a panel in October. “I’ve gone on the record with it, and I think the changes they make show that they’ve got good management at the top, so I’m hopeful that they’ll turn that around.”

“I think a good first step is getting grown-ups in the entertainment division, because I think that they were in over their heads,” he added. “Amazon itself is obviously a hugely well-run company, they know what they’re doing. The entertainment division now has to catch up and rise up to the bar set by the troops in Seattle, and I think they will.”

The show that won Nicole Kidman an Emmy recently, is up in the air about making its return for another season.

“We don’t know yet,” Kelley said to Entertainment Weekly.” We’re kicking it around. If we feel that the material warrants it, we’ll do it. Everybody’s game for getting the band back together, but we want to make sure that we’ve got the music to justify it. That decision hasn’t been made yet, and it’ll be story-driven when it is.”

Kelley is most proud of the more challenging scenes, saying: “The ones that were the most difficult to write and the most disturbing to me were obviously the ones involving Celeste and the violence and domestic abuse. That was just tough stuff to wade into. It was really, I know, equally difficult — probably more so —for Nicole to play, and for Jean-Marc to direct. But there was some gratification when I saw it on the screen to see how well they had executed it. It was very powerful. We ended up being pretty proud of the depiction of it.”

Fingers crossed on that second season and if you want to check out David E. Kelley’s pics, you can view them online!