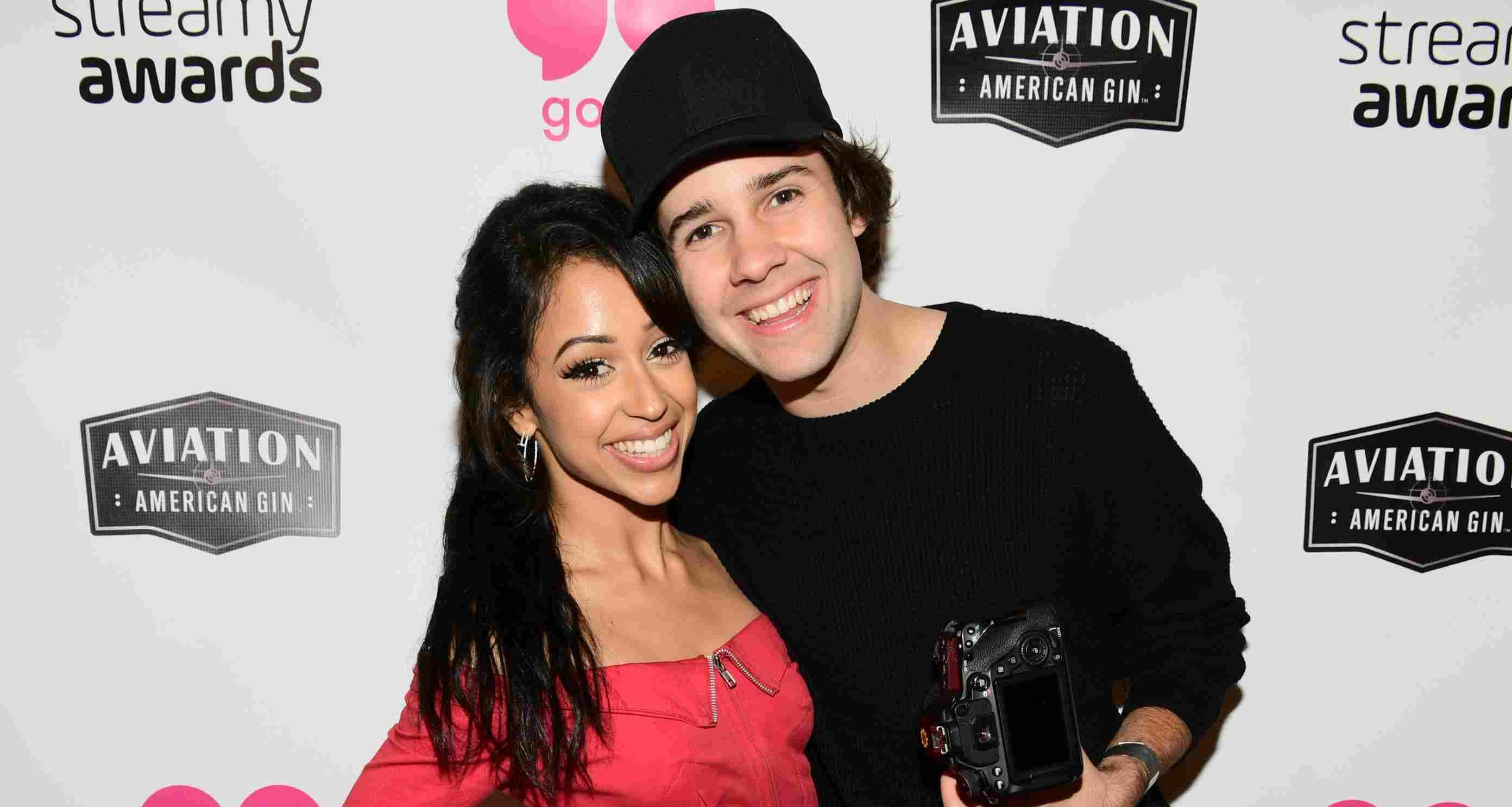 Right now, people are in complete shock over David Dobrik and Liza Koshy’s breakup. The fellow YouTube stars recently took to the video-sharing platform and spoke about their split.

Liza Koshy and David Dobrik rose to prominence thanks to Vine. Since then, they’ve explored other social media platforms and have become extremely popular with many fans all over the world.

Many of their fans and friends were rooting for them to be together forever. But, at least for now, the two have decided to take a break.

On Monday, Koshy and Dobrik uploaded a YouTube video explaining to their fans that they are no longer together.

Did David Dobrik and Liza Koshy Really Break Up?

In the past, there have been rumors about the couple’s breakup. And every now and then, news would spread that the couple called it quits. However, each time, the couple put the rumors to rest, often by appearing in each others videos or showing up together at events. However, along with their increasing popularity, they both became so busy with their respective careers.

So proud of everything this girl has accomplished in so little time. Never have I ever been so impressed with such a tiny human. Congrats for being the cutest person to ever win a Teen Choice Award. Love you Liza!

Koshy and Dobrik officially told the viewers that they were dating each other in 2016 and for the last two years, many have followed their adorable relationship.

Which is why the confirmation of their breakup came as such a shock. And yes, this time, sadly the news about their breakup is true. Dobrik and Koshy sat down in a tear-filled video together to explain what happened.

At the start of the video, Dobrik starts off by saying that Koshy cheated on her (which she didn’t). He jokingly adds that there were seven guys in her bedroom.

Although they talk about their breakup, there wasn’t a hint of awkwardness between them. Though they joke off an on for a bit, they finally get serious and admit that they have decided to take a break.

Koshy says in the video, “David and I are not together anymore.”

In fact, they kept it a secret from their friends and fans for some time. Dobrik explains that Koshy broke up with him six months ago! So, for the past six months, Koshy and Dobrik have been living single lives.

Of course, when a relationship ends, it hurts. But Dobrik explains that it was not healthy for them to continue their relationship for now.

It looks like Koshy is dealing with some stuff. She explains that she is currently going through some personal issues, and in order to give love, she must love herself first. Through her tears, she explained she still very much loves Dobrik, but right now, it’s best for her to be alone. (Get the tissues, the video is heartwrenching!)

Coachella was great but Koshella was wild

In the video, Dobrik also says that Koshy is literally the best girl ever he has met, adding that her “niceness” isn’t just an act for the camera. Koshy tries to hold back her tears, as does Dobrik.

Koshy explains that they told their friends after three months about their split. Dobrik says that in case one of them finds somebody else, they need to be respectful of that.

The reason why Koshy broke up with Dobrik is that she felt they had become distant due to their busy lives. Although Dobrik hates to admit it, he explains that he also felt the same but didn’t have the courage to end their relationship.

So, Koshy decided to end things with Dobrik. They didn’t tell anybody because they were trying to figure things out and were upset that they ever distanced from each other in the first place. With success comes busy schedules, and these two only keep heading upward!

Koshy states that she loves Dobrik and he is still her best friend. She further explains that Dobrik is a good guy and has always been the best person to her.

Warning to Their Future Partners

Koshy says that Dobrik has always been there for her and has no doubt he will be in her future. She says that he is not going anywhere and gives a sarcastic “heads-up” to his future girlfriend.

Through tears, Dobrik says that he has had a lot of fun making videos with Koshy and their two years together were the best years of his life.

Koshy clarifies that nothing bad happened between them to cause their breakup. It’s simply timing, and she added that both of them are still so young. They still have a lot of learning, growth, and development to do in their careers and in their lives.

Dobrik kisses Koshy on the cheek, and she playfully slaps him with tears in her eyes. Of course, they end the video in typical fashion; laughter.

Koshy says that since Dobrik is single now, there is one girl who is dying to meet and hook up with him. Dobrik excitedly closes his eyes while Koshy seemingly goes to get the girl. She returns in glasses, and kisses Dobrik while playing Helga’s character.

Bust out the tissue boxes, people are upset! And fans are in a frenzy over the heartbreaking news! (The comments section alone is filled with sad comments, many who are in disbelief and crying uncontrollably!)

And of course, the entire Twitterverse is distraught over the fact that their favorite couple is no longer together! Many of them took to Twitter to voice their pain: 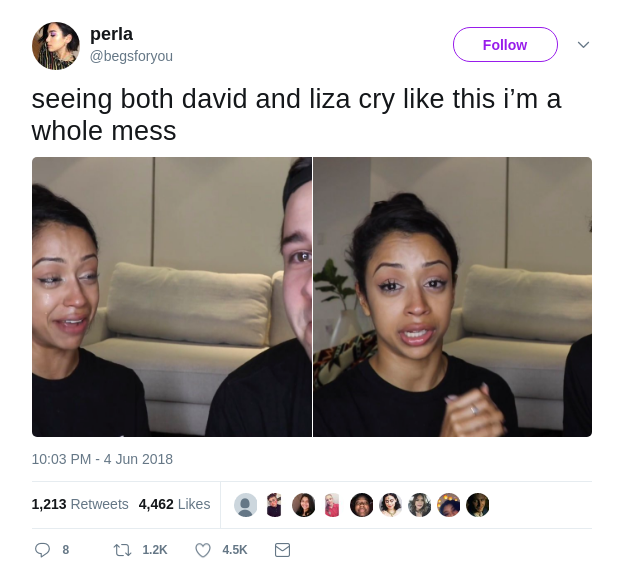 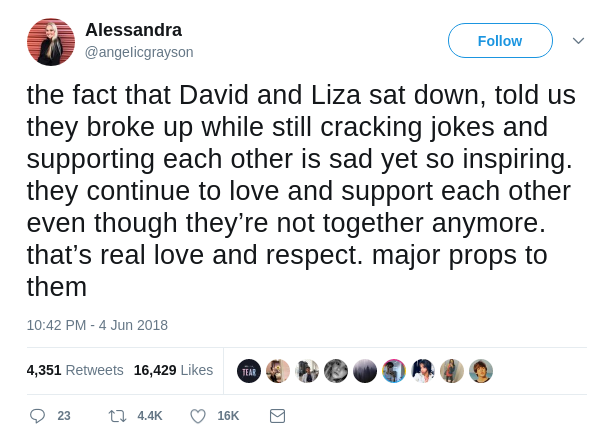 In case you haven’t watched the video, then feel free to click on the link below. Warning: Tears will ensue.