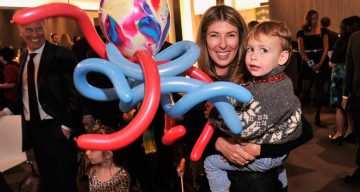 Nina Garcia holding her son with husband David Conrod at the back. (Photo: Stephen Lovekin/Getty Images for Ringling Bros. and Barnum & Bailey)

Nina Garcia returned to Elle magazine as editor-in-chief in 2018, but we’re really just waiting to see her trademark eye-roll when she returns to the Project Runway judging panel in 2019. But what’s it like at home for the blunt-talking fashion guru? Garcia is married to David Conrod and together, they have a pretty normal home life (well, as normal is it get when you’re a power couple). Our David Conrod wiki takes you into the home life of the Project Runway star.

David Lucas Conrod, 57, and 53-year-old Nina Garcia married well over a decade ago and reside in New York where Conrod’s business is based. He is well known as the CEO of FocusPoint Private Capital Group, a firm he founded in 2010.

He’s also a member of LANDC Investment, a financial services platform. It’s the parent company that includes FocusPoint and Rise Line under its umbrella.

Before founding his independent financial ventures, he was a senior managing director at Guggenheim Partners, LLC. As the head of the Guggenheim’s distribution arm, the Private Fund Group, Conrod raised over $13.0 billion for Guggenheim Partners between 1999 to 2010.

Shortly after acquiring his master’s degree, he set about raising HSBC Asset Management’s private equity fund in Asia and Europe as the financial giant’s director of sales and marketing.

He Played Soccer in College

David Conrod graduated from Ohio’s Kenyon College in 1982 with a bachelor’s degree. At Kenyon, Conrod played soccer and was a letterwinner in the Kenyon men’s soccer team during the 1979-81 seasons.

A few years after graduating from Kenyon, Conrod pursued his MBA degree at Columbia Business School in New York. He has since settled in New York City with his wife and kids.

Conrod features prominently among Kenyon’s esteemed alumni. In a 2016 issue of the Kenyon alumni bulletin, he mentioned that he runs into fellow Kenyon Lords and Ladies often in the Big Apple.

Delighted to announce that over the wknd we welcomed 8lb13oz Alexander David Conrod into our home! Baby is doing great & Lucas is thrilled!

The Conrod-Garcia family used to call an apartment in Manhattan’s Upper East Side home. They listed the apartment for sale at $8.5 million when they were expecting their second child.