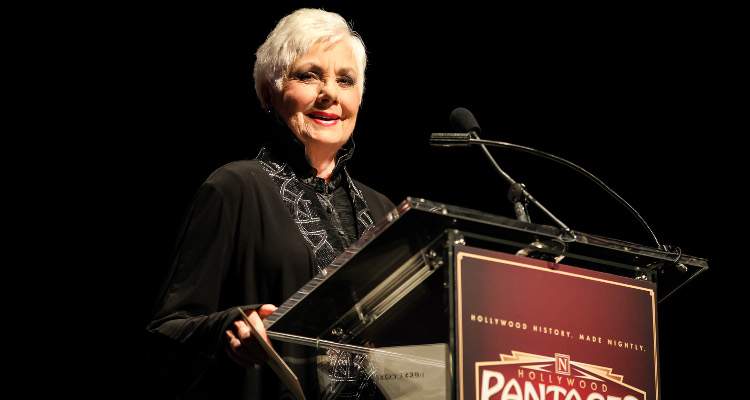 Iconic teen heartthrob, David Cassidy passed away on Tuesday night. He was famous for playing the son of Shirley Jones on The Partridge Family, who is his stepmother off-screen. Is Shirley Jones still alive? Find out here.

In the ‘70s, we fell in love The Partridge Family. The musical sitcom followed Shirley Partridge and her children on their music career. The eldest son, Keith was played by the late David Cassidy who passed away on November 21. His on-screen mother was actually his stepmother in real life. After the death of David Cassidy, many are asking if Shirley Jones, who played the Partridge matriarch, is still alive. She often spoke out about her stepson’s personal struggles. Find out about Shirley Jones and David Cassidy’s relationship in Shirley Jones’ wiki.

#1. She was a Natural-Born Singer

Jones was born in Pennsylvania to Marjorie, a homemaker and Paul Jones, the owner of Jones Brewing Company. Her parents may have known she was destined for stardom since they named her after the iconic Shirley Temple.

At a young age, her mother noticed that she had a natural talent for singing. A six-year-old Shirley began singing in her church choir. In high school, starred in school plays. She studied drama at the Pittsburgh Playhouse. It was when she won Miss Pittsburgh in 1952 when she realized her dreams of being in the spotlight, and embarked on her performance career.

#2. She Started with Rodgers and Hammerstein.

Jones and her parents were vacationing in New York when she was 19. There was an open casting call for Rodgers and Hammerstein productions. It was her first audition and she had not heard of the famous Broadway duo beforehand. Nevertheless, she impressed casting director, John Fearnley with her talent.

He actually ran across the street to fetch Richard Rodgers, who was busy rehearsing. Rodgers then called Oscar Hammerstein at his home. They saw Jones’ potential and signed a personal contract with the songwriters, the first and only singer to have this honor. They cast her in a minor role in South Pacific, then a choir girl in Me and Juliet.

The duo soon cast her as the lead in the film adaptation of their hit musical, Oklahoma!. In 1955. The multi-million dollar production was critically acclaimed and launched her career. She followed this success with more film musicals like Carousel, April Love, and The Music Man.

Tired of playing the same wholesome, kind, girl-next-door characters in musicals, she shocked fans by portraying a vengeful prostitute in Elmer Gantry. It won her an Oscar and cemented her status as a versatile actress.

She soon made her transition to the small screen with The Partridge Family, for which she is remembered for even today. The cast capitalized on the phenomena and recorded few chart-topping albums. But after the show’s cancellation, much of the cast, including Jones, struggled to find work of a similar caliber.

On The Partridge Family, Jones played a widowed mother of five who travelled and performed as a family band. David Cassidy played her eldest son, Keith Partridge and they were family in real life. Jones was married to Cassidy’s father and was his stepmother.

David Cassidy’s father, Jack divorced his mother, Evelyn Ward in 1956. The same year, he married 20-year-old Shirley Jones. David was six at that time, and it was too much for him to see his father divorce and remarry so soon. He narrated his experience when his father remarried and his relationship with his stepmother.

“The day he tells me that they’re divorced, he tells me, ‘We’re remarried, and let me introduce you to my new wife.’ He was thrilled when her first film, Oklahoma!, had come out; and my dad took me to see it—I just see her, and I go, uh-oh, it doesn’t really quite register with me, ’cause I’m in total shock, because I wanted to hate her, but the instant that I met her, I got the essence of her,” said Cassidy in an interview, “She’s a very warm, open, sweet, good human being. She couldn’t have thawed it for me – the coldness and the ice—any more than she did.”

Shirley didn’t know her stepson was going to audition for The Partridge Family, and David didn’t know she was cast as the matriarch. About his on and off-screen mother-son relationship, he said, “She wasn’t my mother, and I can be very open, and we can speak, and we became very close friends. She was a very good role model for me, watching the way, you know, she dealt with people on the set, and watching people revere her.”

Shirley and Jack had three children: Shaun, Patrick, and Ryan. They divorced in 1974 but David maintained a close relationship with Shirley and his half-brothers until his death.

Jack died in 1976 when his penthouse caught fire. That night, Jones rejected his offer for reconciliation. In a later interview, Jones who remarried, confessed that if Jack was alive, they would have been together.

After her divorce from Jack Cassidy, Jones met comedian and actor, Marty Ingels at a party thrown by Michael Landon. Love blossomed and they married in 1977. They were an odd couple and Ingels commented on it saying, “I was a Jewish kid from Brooklyn and she was Miss America. A lot of people never got that.”

Their marriage was rife with ups and downs. They detailed their mismatched relationship in a joint autobiography, Shirley & Marty: An Unlikely Love Story. They separated only to reconcile again. Jones once filed for divorce, then withdrew her request. In 2002, she sought a divorce petition again, but they remained married until Ingels’ death in 2015.

After his death, Jones said, “He often drove me crazy, but there’s not a day I won’t miss him and love him to my core.”

#5. She Spoke out about David’s Problems

David Cassidy became The Partridge Family’s teen heartthrob, but the curse of early fame followed. His fans moved on after the show’s cancellation, and his subsequent work was less successful. He switched gears to a music career and toured extensively.

He shared his struggles with substance and alcohol abuse in 2008, was charged with a DUI, and spent a stint in rehab. In 2015, he filed for bankruptcy and in 2017, was diagnosed with dementia, following which he took a break from touring.

In 2015, Jones revealed that Cassidy’s family was concerned about his well-being. “We are just scared to death that we are going to wake up one morning and find out that he is dead on the floor,” she said.

The 83-year-old also revealed that his alcoholism caused him to isolate himself. He had very little contact with his half-brothers or Jones. “David has not had a relationship with anyone in the family for years. We are sick over it.”

According to reports, when Cassidy was hospitalized on November 18, he was glad to see his brothers. It was reported that his family rushed to be by his side.