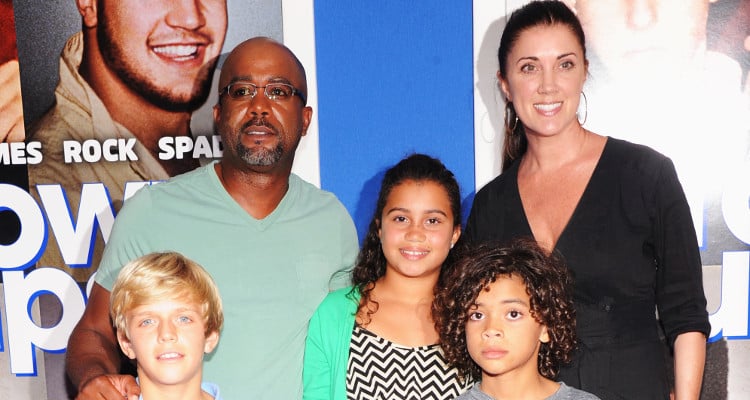 When Darius Rucker transitioned from rock to country music, it was his wife, Beth Leonard, who encouraged and supported him. Today, Rucker is a successful country music artist and he thanks Leonard for everything. She had a successful career at VH1 before giving it up for the most satisfying job in the world ─taking care of her three adorable children with Rucker.

The lead vocalist and the rhythm guitarist of Hootie & the Blowfish, Darius Rucker, forged a successful career in country music. He made a triumphant transition from being a rock singer to a solo country music artist and released five studio albums, as well as a clutch of successful singles.

Is Darius Rucker married? Yes! Rucker has been married to Beth Leonard for the past 17 years, and the couple are still going strong! In fact, the person who made his musical transition possible is Darius Rucker’s wife. He even revealed that it was love at first sight when he saw Leonard. Here are some details from Beth Leonard’s wiki.

Though there are no details about Beth Leonard’s age, we do know that she is from New Jersey and used to work for VH1 in New York. Her schedule included booking talented singers and bands, planning events, and working with various artists and managers. At that point, Rucker was still with Hootie & the Blowfish and Leonard had a crush on him. Rucker, on the other hand, was already in love with her. Remembering those early days, he said, “I don’t know what it was about her. I mean, it was EVERYTHING about her. I told her I was going to marry her on our first date.”

Leonard, however, was a bit reluctant to go out with Rucker. According to Rucker, “I had been trying to get her to go out with me, and she wouldn’t. I was in New York [with Hootie & the Blowfish], and it was one of those rare nights off. I didn’t have anything to do — we always had something to do when we were in New York! We had the night off, and I was just in my hotel room. She called me and said, ‘Hey, do you want to go see this play?’ I was like, ‘Sure!’”

The Wind Beneath His Wings

Happy 22nd to this brilliant beautiful and talented young woman. U love u Cary!!

After leaving Hootie & the Blowfish, Rucker was considering a career in country music but had a case of the nerves when the time came for him to make the transition. It was Leonard who encouraged him and stood by him in those trying times. She told The Boot, “The funny thing is, he’s actually a country guy, and he always wanted to be a little more country. [Hootie guitarist Mark Bryan] is actually the rock guy, so Mark always wanted the band to be rock rock rock … Hootie’s more country than some of those country bands.” Thanks to Leonard’s faith and his talent, Rucker now is a successful country musician with six number one singles and five albums. Rucker gratefully said, “You know, her and country music saved my life.”

Getting Better with Time

Leonard seems to like being away from the limelight as she is not active on social media. With a musician husband and children vying for her attention, who could blame her? Rucker has a tight schedule, and Leonard has adjusted to this unpredictable lifestyle. He gives her the credit she deserves saying, “Beth’s a strong woman. It takes a strong woman to be married to a musician, especially a musician who was drinking and partying as hard as I was.” He further added, “And I thank her every day for staying with me and being the strong woman she is.” With Rucker’s career on the upswing, the children growing up, and Leonard at the helm, this relationship will keep getting better with time.